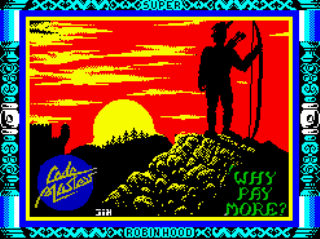 The Oliver Twins might be most famous for the splendid Dizzy series, but their first foray into the the world of published games was this budget effort which was first released on the good old Speccy. I'm not sure what made them choose the legendary outlaw from Sherwood Forest as the basis for their first game but the result has seen poor old Maid Marian kidnapped once again by that super-cad, the Sheriff of Nottingham. It's therefore your job to fill the boots of our gallant hero and make your way through Nottingham Castle, battling against fearsome adversaries and overcoming cunning traps in order to free her. Followed, presumably, by a celebratory ravaging. Like many such games, Super Robin Hood is a flick-screen platform adventure, and standing between Robin and Marian are over forty screens of tough action. 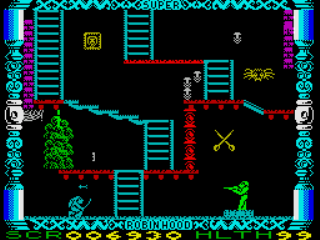 Negotiating the many screens is done by using the ladders, stairways, and moving platforms that fill them. Robin is armed with an apparently magic bow which comes complete with infinite arrows, but they can only be used against the green guards. Other enemies such as the hideous rats, spiders, and eyeballs, must instead be avoided. Robin has ninety-nine health points at the start of the game. These are quickly lost by contact with enemies, or even by falling more than a few pixels, but can be replenished by collecting the 'tablets' that are dotted around the screens. There are also hearts which must be collected, presumably to prove your love to Marian (most women would just be grateful for the rescue!), and there are also keys that are needed to operate mechanical lifts. 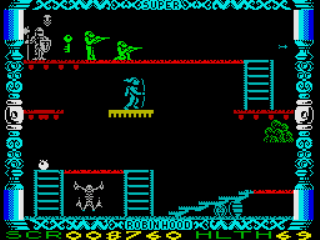 It probably all sounds very generic and the style of the game is indeed a familiar one. It can be quite tough too. It's not as ridiculously unfair as many similar games though, and the screens are fairly well-designed. There's no hit-recoil when you touch an enemy so it's possible to get stuck and lose all your energy in one go, but you can just leg it if you get cornered without being bounced around all over the place as well. There's not too much back-tracking involved either, which is good news when you have invincible enemies to deal with! The graphics are quite colourful but the backgrounds plain, there's a nice title-screen tune but limited in-game sounds - it's all pretty average, no-frills stuff - entertaining for a while but not the most terribly gripping game of all-time. It's hard to complain for a couple of pounds though. Nothing special but a decent start from the Olivers!