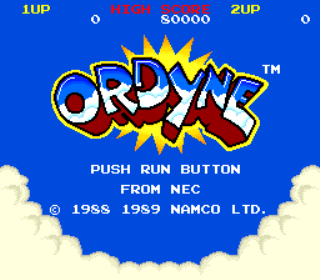 Although one of the first of the Japanese arcade companies, Namco are perhaps better known today for their endless variations of Ridge Racer and Tekken. However, in between these two periods they released a lot of slightly more obscure but arguably more interesting titles, and one of these was Ordyne. It is, in the words of Namco themselves, a "comical action shooter" which brings to mind a certain psychedelic shmup by Sega, and the two games do have quite a few similarities. As you can probably see from the screenshots, both are side-viewed and both are based in bright, cartoony game worlds. However, the hero this time is not an anthropomorphic spaceship but a genius scientist, Dr. Yuichiro Tomari, whose fiance has been kidnapped by the evil Dr. Kubota who has also taken the Ordyne nuclear reactor for good measure. Now it's up to Dr. Tomari and his loyal assistant, Sunday, to save the day! 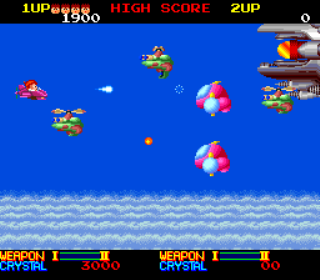 In keeping with the comical nature of the game, all Yuichiro (and Sunday with two players) has with which to do this is a stumpy little plane which must be piloted through seven enemy-filled rounds which, unlike Sega's game, scroll along automatically much like standard horizontal shooters. The proceedings get under way with a lovely blue 'n' cloudy first round before things take a more dangerous turn with rivers of lava and fiery rocks on round two. The remaining rounds take in fortified enemy installations and several other planetary landscapes including some areas partially submerged in water! Populating the various rounds are some thirty-three different kinds of enemies altogether, thirty-two of which are robotic minions of Dr. Kubota including both flying and ground-based examples as well as a large boss at the end of each round, while the thirty-third is the Doctor himself! 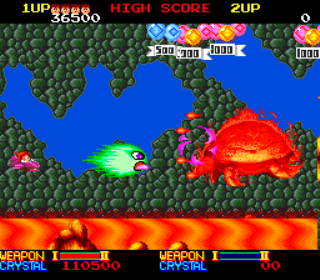 All fairly by-the-numbers so far I think you'll agree, but where Ordyne bears its most striking similarity to Fantasy Zone rather than most other shmups is in its power-ups. Yuichiro and Sunday's little ships both come equipped with a forward-firing shot and bombs. Each has unlimited ammo but are rather weedy too so it's lucky you can count on Miyuki-chan and her floating weapons emporium! That's right, at set points during the rounds you'll find her shop and upon entering you'll have three items to choose between. Over the course of the game there's five types of shot upgrade, three types of bomb upgrade, speed-ups, and the ever-helpful extra lives. The weapon upgrades dramatically increase your offensive power but only for a limited time so their use often requires a little strategy. Everything is bought using crystals that appear and float around after some enemies are destroyed. They don`t hang around for long though so grab them quick! 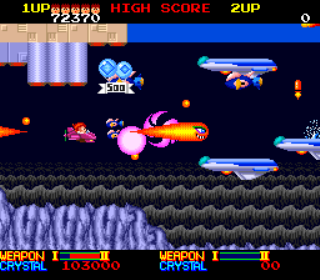 In addition to Miyuki-chan's shop, there's one other way to gain power-ups or crystals, and it can be a life-saver! Flying by on some stages is a robot who calls himself 'Dream Co. Ltd'. If you manage to catch him he'll give you the chance of winning some goodies. You'll have to wager some of your crystals but it's possible to win one of many upgrades or even more crystals. The first time I played Ordyne I somehow managed to win 100,000 crystals which was enough for me to buy anything my heart desired from Miyuki-chan's shop for the rest of the game! I doubt I'll be that fortunate too often but it certainly helped me to get to grips with the game, and it's been a very enjoyable experience too. As a big fan of Fantasy Zone there were lots of little reminders of that great game here but it's a much more traditional shoot 'em up than Sega's effort. 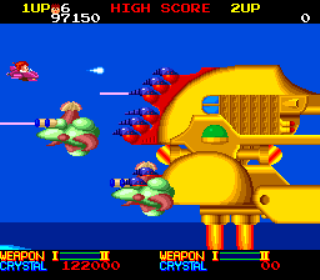 Both games contain vibrant and happy soundtracks but I would have to say the tunes here are rather less memorable (and not as loud!). They're nice enough though and the sound effects are great. Sega's game was probably better known for its outlandish graphics than its music though. Most of the characters here are nearly as strange and wacky as Fantasy Zone's and, while it's hard to say what most of them actually are, some of them are pretty creative and amusing. The backgrounds are a little less appealing though, and far less overwhelming. Some may say that's a good thing of course - some of Fantasy Zone's did require sunglasses after all - but the stages here are definitely plainer and don't seem as 'busy'. Some of them look pretty nice though, with the fiery caverns of the second round being my personal favourite without question. The bosses are less imaginative as well with most of them simply firing a barrage of projectiles your way which makes them pretty tough! 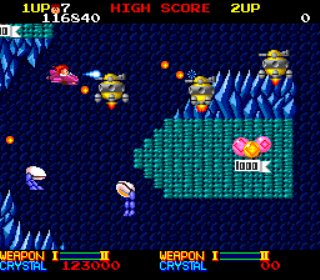 Ordyne certainly isn't an easy game which ironically is often the case with these cutesy affairs! Yuichiro and Sunday are downed by a single shot and the screen can often get very busy with not only enemies ships, guns, and missiles, but also the occasional large, moving obstacle which must be carefully navigated, often whilst under attack. Some of these sections from the arcade version are missing here but overall the Engine, which was the sole lucky recipient of such a conversion, does a spiffing job of bringing this entertaining shmup to home gamers, albeit a limited number. Is it a game that deserved a wider audience? I would have to say yes. It's not the best shmup on the Engine and much of the time playing it will be spent plugging away with the piddly default weapons but it's rarely a frustrating game and the stages have been designed well enough, with Namco's usual high quality evident, so if Fantasy Zone was a little too trippy for you, give this slightly more subdued effort a try instead!