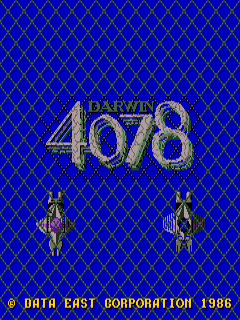 After the wonder of my recent experience with Genetos, its evolutionary theme reminded me of a shoot 'em up I used to enjoy on my MegaDrive. It was a conversion of a Data East coin-op, Super Real Darwin, which as I discovered much later, actually turned out to be the sequel to this very game featured here. It takes place inside a gigantic spaceship which was created using Evol, the lifeforce of the planet Lakya which was unwittingly unleashed by the advanced inhabitants and harnessed by their neighbours from the planet Cokyo (nice name). What this all basically comes down to is a vertically-scrolling shooter in which you must pilot a biological ship through the giant ship over no less than sixteen stages, taking out as many of its defences as possible as you go. 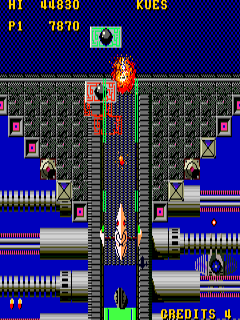 At the start of the game your ship is fairly small and doesn't really pack much of a punch but shooting certain enemy craft will release floating 'E' capsules. These are concentrated pieces of Evol and each one that you collect will alter the DNA of your ship causing it to evolve to a more advanced state. Not only does this change its shape and appearance but also equips it with new and unique weaponry. Staying in one form without collecting further Evol capsules will cause the ship to 'devolve' to the previous stage after a short while, so it's necessary to keep collecting them throughout the game. There are nineteen different stages that your ship can potentially evolve or devolve through in total, but not all of them can be achieved simply by collecting capsules. There are a couple of special forms, called 'Mutations', which can only be accessed under certain conditions. These have advanced offensive or defensive abilities but only last as long as any other state before devolving. The enemies are a mixture of small craft which zip about at high speed, larger craft which are slower but more powerful, and small guns dotted about here and there on the terrain below. Each variation of ship has a unique weapon, nearly all of which fire forward at differing rates and powers, but to take care of the ground targets you'll need to make use of your short-range bombs which don't go through the evolutionary process. Taking a hit from an enemy bullet causes your ship to revert to the most basic form. Taking a hit in this form means death. 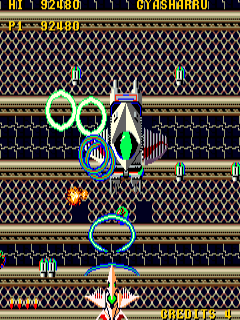 Colliding with an enemy craft causes instant death no matter what form you're in. In this way, and indeed most others, Darwin 4078 is a fairly run of the mill vertical-scroller. Unlike the supremely awesome Genetos, the use of the evolution theme in Data East's game is little more then a gimmick to facilitate the various power-up weapons which could just as easily have been weapon pick-ups for an otherwise unchanging ship, much like most other shmups. Having said that, the change in shape each time your ship evolves usually brings with it an increase in size, and this can occasionally cause problems. It shouldn't take too long for a reasonably-skilled player to reach the upper levels of evolution, so to speak, and your ship in these states is pretty sizeable meaning it's harder to remain unscathed. 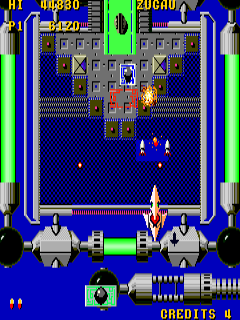 Another slight annoyance is that when an enemy hits you with a pot-shot, your ship devolves down through all the preceding states, one at a time, until it get to the tiny (and weedy) Pister ship. The game has pretty nice animation during these sequences but the problem is, you can't continue shooting until it's finished, and it takes a good few valuable seconds. Admittedly, you are invincible for these seconds and can ram enemy ships but it's disruptive to the flow of the game. The speed that the enemy bullets home in on you depends on how far away you are from the ships shooting them so you don't gain any advantage from keeping your distance in a small ship. Some of the enemies move pretty quickly too and take a few shots to destroy, even with a fully-evolved ship. 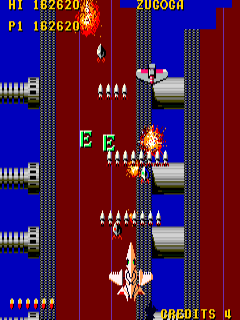 All this means you either have to carefully manage the evolutionary process of your ship or instead spend the game trying to steer a hulking great space-cruiser between the many ships and projectiles. The collision-detection often appears to be iffy too but it could be due to the constantly-changing size of your ship. Either way, it's a pretty tough game! All except the bosses which, for some reason, are particularly weedy. Most of them look extremely similar and can be taken down by a single volley from one of the more powerful forms of ship, so it's the actual stages themselves that present the biggest challenge here. But will you want to see it through to the end? Well, I can't speak for everyone but I wasn't very inspired to.

The music and sound effects are average and there are few different tunes, and graphically the game is rather disappointing too. There's a reasonable number of enemy sprite designs but they don't really look like anything in particular and, unlike your own ship, their animation is very limited. Equally uninspiring are the backgrounds. Some parts are detailed, others are not, but again they don't really resemble anything and the colours used throughout are rather dull and gloomy so the desire to see the later stages isn't very strong. In many ways this game reminds me of Slap Fight but Toaplan's effort was much more appealing in pretty much every way. The concept of Darwin 4078 isn't a bad one and the execution is hardly a disaster - there's even an innovation or two like the ability to stun and seize certain enemy ships - but it's more often an annoying game to play than an exciting one, and I think once all the different ship variations here have been seen, interest will wane quickly. It did for me, at least!