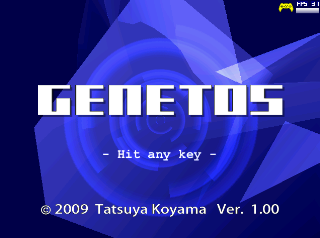 I'm sure the recently started doujin feature here at Red Parsley will introduce me to some fantastic games by some talented guys (and gals?) that I may never have otherwise played but a big part of my motivation for starting it was to finally force me to get around to playing this game. I think it's probably fair to say that it's the most famous doujin shmup but does that make it the best? This is of course impossible for me say since I've only played one before it, but I will give it good going over anyway, and its popularity is immediately obvious! It's a game, you see, which is in part a retro homage to the shmups of old, but which is also a much more modern take on the genre, and its biggest trick is how it gets from one to the other. 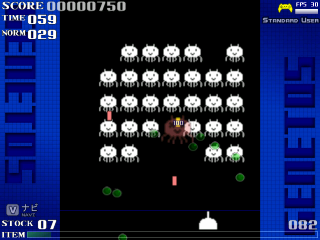 It's a game billed as 'evolutionary shooter' which basically means it's a tribute to the genre as a whole, from its creation in the 70's right up to today's hardcore offerings. There are five stages in total, each of which represent an 'age' of shmup history. It starts off with a simple Space Invaders-style stage, then 'evolves' into a basic vertical-scrolling game. Here your ship is given more freedom to move around, although it's still restricted to the lower half of the screen, and the enemies are replaced by formation-flying ships. The third stage allows full movement of the ship around the screen and sees the introduction of additional armaments for your ship (such as bombs) as well as larger and more fearsome enemies to use them on. The fourth stage brings things more or less up to date by moving into a twinkly, neon-drenched bullet-hell scenario. 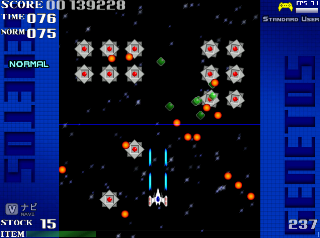 The fifth and final stage is almost as long as the previous four combined and is itself sub-divided into five chapters titled 'birth, variation, selection, prosperity and extinction'. As if this didn't all sound splendid enough already, it gets even better! Much of your progress through the game is dependant on your actions while playing. For example, throughout all of the stages downed enemies release small green floaty things called 'items'. When collected, these will gradually fill the meter at the bottom of the screen. When it's full, it's time for something that every shmup needs - a good boss fight! These are referred to as 'mutants' and are appropriate to the era the stage is representing. Shooting the standard enemies that each boss creates will continue to produce green thingies and collecting them here will start filling the item-meter again. When it's full for the second time, the game will dramatically declare a 'Generation Shift'. 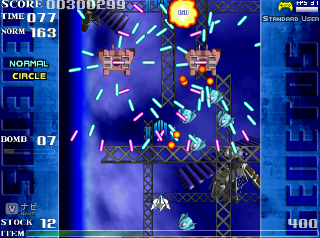 The Generation Shift is the point at which your own ship evolves to the next era. As well as a change of appearance, this will also improve its firepower. This all means that it's effectively possible to make the stages last as long as you want. There are additional ways to change aspects of the game too such as not evolving your ship during the boss fight or by starting the final stage with a small number of lives. Extra weapons become available as your ship evolves but this can also depend on the conditions of play. One of the most entertaining power-ups is called 'Summon' and allows you to resurrect a previously-defeated boss to fight alongside you temporarily! Suffice to say, the 'evolution' theme isn't merely restricted to the differing stages - there's quite a bit more to this game than there may initially appear to be. 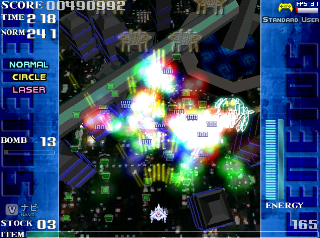 In fact, the quality of Genetos generally is so high that it's genuinely hard to believe that it's effectively a homebrew title and freely available to download. Every aspect of the presentation is faultless from the swish title and options screens to the fantastic fourteen-song soundtrack to the gorgeously-defined and detailed graphics - this really is a completely professional quality product which I, and no doubt many others, would have happily paid for if necessary. Obviously, by the game's very nature, the graphics get more impressive as you advance through the stages with the sprites getting bigger and more detailed until they reach the stage where they more closely resemble protozoa-like creatures than spaceships, and destroying them sees standard, fiery explosions gradually change into multi-coloured neon fireworks. Some of the later backgrounds are very impressive too, featuring all manner of twirly 3D patterns and landscapes. 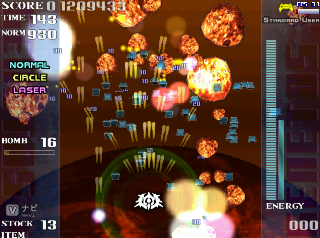 Just about the only criticism I've seen levelled at Genetos is its difficulty. Surprisingly for a shoot 'em up, that doesn't mean it's impossibly difficult. It's actually a little too easy in the eyes of some. I certainly don't hold that against it though. After all, Koyama-san has clearly put a huge amount of effort into this superb game and must be justifiably proud of it, so who can blame him for wanting players to actually see it all? Not me, that's for sure! Besides, there are five different difficulty levels so if you like a tough challenge, simply select a higher level - there's one to cater for any skill level! Another decent feature is called 'Free Play' and allows you to select and play any stage, and it's also possible to save replays of your performance in the main game too. 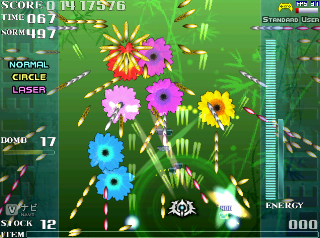 Aside from being free and of exceptional quality, Genetos is understandably most famous for its evolution theme. However, far from being a cheap or unnecessary novelty, it has been well thought-out and superbly implemented by the talented Tatsuya Koyama, but even if the whole game was made like any of its single stages, it would still be a highly enjoyable game to play. There's a ton of options and features to be discovered and messed around with and the technical aspects of the gameplay, such as the collision-detection, are spot-on. During the end credits the programmer gives namechecks to various 'respect games'. I have a similar list of games in my head that I have enormous respect for and Genetos is now on it. If you have even the remotest interest in shoot 'em ups, or even videogames generally, download this immediately!