I think it's fair to say that the Neo Geo is best known for the masses of fighting games available for it, as well as perhaps the splendid Metal Slug series, but it's also played host to some corking shooters. Like most games on the system, they're hardly the pinnacle of originality but it's tough to complain when the quality is so high! Here's the best five (in my opinion, of course!): 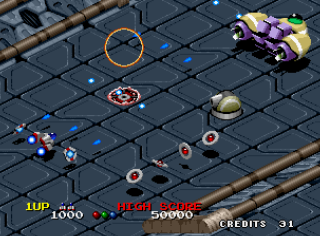 I've actually got the PlayStation version of this splendid game which I'm told is far inferior to this Neo Geo original but, aside from slightly different graphics and a new soundtrack, I'm struggling to tell them apart. Both versions are isometrically-viewed blasters with the same enemies and stage layouts, and both are harder than ten angry Chuck Norris's, and it's this savage difficulty that prevents the otherwise original and addictive game from featuring higher on this list. Perhaps tellingly, the six stages aren't very long, but they're sure packed with some unique features and tough enemies, and should last a good while. The graphics are very polished and look lovely throughout while the soundtrack is fantastic. The Zaxxon-inspired viewpoint (no pun intended) takes a bit of getting used to, but play this for a few minutes and you'll soon find yourself hooked. 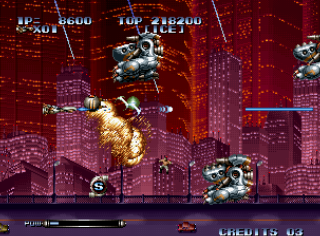 My good buddy Luke used to have this one for a short while (the CD version as I recall) so it's a game I was already fairly well acquainted with, and for such an early Neo Geo game it still holds up superbly well. The story is the usual 'computer virus taking over the world' type nonsense and that's not the only aspect of the game that's lacking in originality. It plays a lot like R-Type, particularly thanks to the inclusion of a drone which acts much like the R-9's 'force', and has also apparently been inspired by anime like Akira. What the game lacks in fresh ideas, however, it more than makes up for in quality. The presentation is fantastic and the moody graphics and music create a great atmosphere. It's another tough game for sure but it's aged well and remains as playable as the day it appeared. 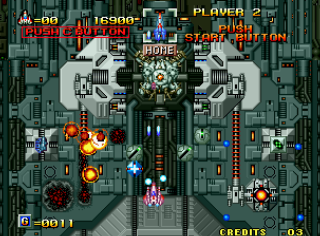 One of the first shooters released on the Neo Geo and one of the most underrated in my opinion. I'm a fan of its similarly-underrated predecessor (reviewed here) and this sequel continues the themes and style whilst adding a few new features of its own. There's millions of power-ups to collect again and the splendid armour-based weapons are even more satisfying to use here! The graphics are much improved as well, of course, and I really like the detail and colours SNK have used which suit the game splendidly. For some reason this game is looked down upon by the Neo Geo fanboys but I really don't know why. It looks and sounds nice, has loads to see and do, and is a game which rewards skill, and even a smidge of strategy, over manic, aimless button-mashing. One of my favourite vertical-scrollers! 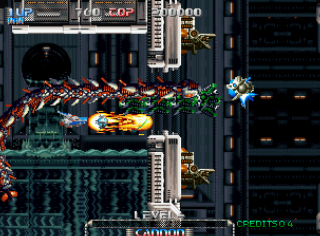 If Last Resort is a game that's 'influenced' by R-Type, Pulstar is a game that downright rips it off! This is slightly more acceptable, however, considering some ex-Irem coders are apparently responsible for it, and what they've produced here is arguably even better than the game on which it was based. There's eight years between them of course, so it's a little unfair, but Pulstar is a game with a great reputation and a price-tag to match. The outstanding presentation features an anime intro and cut-scenes, a fantastic soundtrack, and the graphics are among the most gorgeous to be found on the Neo Geo - the pre-rendered backdrops are stunning, the bosses huge, and the sprites ultra-detailed, and as you may have guessed from its lofty position in this list, it doesn't play too badly either! It's a very tough game but by jove it's good! 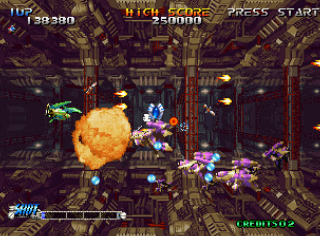 A bit of an opinion-divider, this one. As the sequel to Pulstar which was so worshipped by the Neo Geo elite, I suppose more of the same was expected, but even better. What the fans got was a quality shoot 'em up without question but rather different in style to its prequel, and it's one that I prefer, albeit marginally. For starters, there are six different ships to choose from here and each has different but big, loud, and flashy weapons. It's also a little easier than the rock-hard Pulstar, but the biggest difference is probably the graphics which are of a noticeably different style. Both games look lovely but the sprites here often have a CGI look to them and some of the pseudo-3D backdrops are absolutely stunning. The anime intro and cut-scenes return and the music is again fantastic too. There's even some Engrish! I can understand if some players prefer Pulstar but Blazing Star is for me one of the finest shmups I've played.
Posted by RetroKingSimon at 18:07