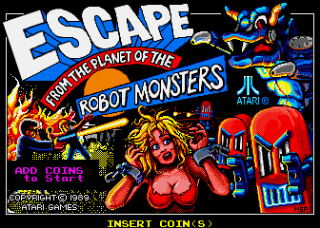 I've always liked isometrically-viewed games. They're not all great of course but the good ones count among some of my favourite games. I even made a 'Top Five Isometric Games' feature, so it is with the utmost contempt and disgust with myself that I now realise I forgot to include this game in the list! The late 80's Atari classic is a homage to the many sci-fi B movies that appeared in the 50's and 60's but, despite seeing release on most systems of the day, it's a game that up until this review I've only played in good old monochrome on my trusty Speccy. I bloody enjoyed it but I've also long wanted to give the arcade original a try so, after a period of buggering around to get it working, I have the chance to find out if it was worth the wait!

It's a game that shares some qualities with other Atari coin-ops of the era but it definitely has a distinctive style of its own too. The title screen is a parody of the movie posters of the day and the game's story is relayed in images and text of a similar style which tells of the evil Reptilons who have kidnapped Dr. Sarah Bellum (who is of course blonde with giant knockers), and taken over her research facility which is in fact a synthetic planetoid called Planet X. As well as the good Doctor Boobies, the Reptilons have enslaved the human population there (and stripped the simlarly buxom females workers to their undies, as you would) and are forcing them to create an evil robot army to invade Earth!

Luckily there are two heroes at hand - Jake and Duke - who, with your help, must stop the Reptilons and their diabolical plans. The game takes place over thirty-one stages altogether, or 'waves' as they're referred to, and there's three different types - Factory, Canal, and Reptilon. The factory waves are the main stages where all the workers are being held hostage by the many robots. The object here is to battle through the metallic hordes, rescue as many hostages as possible, and reach the exit. After each factory wave is alternately a canal wave or a Reptilon wave. The former sees you in control of a small shuttle which you must pilot through a short but strictly-timed maze which dictates your path through the game, while the latter are boss fights against the giant Reptilons.

In order to inject a bit of longevity into the action there are alternate routes through the game. Whichever one you take, when playing from start to finish you'll play through fifteen stages. Seven of these will be factory waves, four are canal waves, and four will be Reptilon boss fights including, of course, the final showdown against the head honcho. Your main weapon for taking out the many robots is your Ray Gun. It has infinite ammo but its power level can only be increased by collecting the gems that destroyed robots leave behind. If you stop collecting gems, the power level will gradually fall so a regular supply is the only way to keep it at a decent level. Jake and Duke have a limited energy meter which can be replenished by breaking open food lockers and they can also collect and deploy bombs for added robot destruction.

All three types of stage are viewed from an isometric viewpoint but, as mentioned, the bulk of the game is the factory waves. These play a lot like the classic Robotron 2084 (aside from the change in perspective) in that there's an often overwhelming number of robots attacking from all sides! However, the added dimension has allowed the use of multi-tiered stages. The floors are accessed by ladders or, more commonly, Electro-Stairs which you must first turn on by finding the relevant switch. The stages are also filled with lots of computers and laboratory equipment which can be destroyed for bonus points (I'm not sure why though - you're supposed to be liberating Planet X, not destroying it!). However, it's not advisable to devote too much time to this as a Sentry Droid will arrive if you stay in one spot for too long.

There are also various other types of traps and hazards but the stages are all nicely designed and exploring them with Jake and Duke is great fun. They can move quite quickly in all eight directions and there is also a power-up to be found to speed them up even more. They can also jump and duck which is necessary for shooting some things or avoiding enemy fire. Indeed, as you progress through the game, more and more different types of robots are introduced and the mindless hordes from the first stage are soon joined by much more dangerous ones which can shoot back. They often stand right next to a hostage while doing so too and since you can shoot the helpless girlies just as easily as the enemies, great care is often required, and it's from this that the game's only real problem stems.

The stages are interesting to play though but controlling Jake and Duke is often a somewhat sluggish affair and shooting accurately can sometimes be a little tricky. It's not a huge problem though, more of an occasional inconvenience which the game's many good points make it easy to overlook. The most immediately striking of these is without question the superb visual style. The cartoony title and intro screens are fantastic and set the 'B Movie' tone for the action perfectly and almost as eye-catching are the in-game graphics. They retain the comic-strip style and include some nice humorous touches such as when you nearly fall off the edge of a platform. The colour schemes change from stage to stage as well, with some well chosen shades, and the detail in the sprites and scenery is top-notch with great attention-to-detail.

Atari really have done a great job of capturing the style of the movies that inspired this game but it's not just a gimmick either. I don't like being forced to hurry up in a game where I'd prefer to take my time, but this irritating time limit and the slightly iffy controls are about all that's wrong with this splendidly-named game. The sound isn't nearly as impressive as the graphics (the Gauntlet speech is getting a bit old!) which is a shame as it could've really been the icing on the cake, but this is still a rather superb, not to mention addictive game which really should be played by more people. The stages can get quite intricate and it can get a little chaotic but it's never less than enjoyable and is more usually enormous fun, whether you're joined by a friend or not. The variety between 'waves', as well as the alternate routes, mean it'll last you a long time too. If you haven't experienced this unique and charming game before, I urge you to give it a try now!