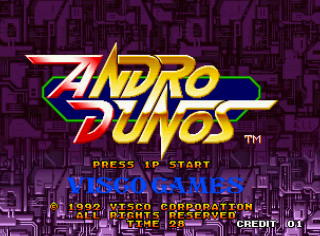 One of the many subjects recently under the microscope here at Red Parsley was that of shoot 'em ups for SNK's monstrous arcade and home console system. It hosts some damn good ones for sure but here I'll take a more detailed look at one of the ones that didn't make the cut and, like a surprising number of Neo Geo shmups, it was released early on in the system's life. It's a game that isn't looked upon with much affection by the Neo Geo fanboys either. In all fairness, I suppose when you have the likes of Pulstar and Blazing Star to get your teeth into it has a lot to live up to, but what little I've known about the game prior to playing it for this feature made it seem inoffensive enough, and thanks to a recent visit by my good retro gaming buddy, Luke, I had the chance to finally give it a good going over. 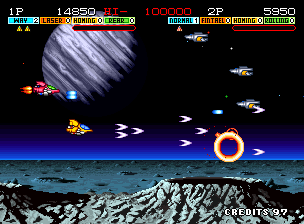 As far as I can tell there's little in the way of story and, aside from a very brief 'ships launching' intro sequence, Visco throws you (and a friend) straight into the horizontally-scrolling action. Players one and two control a yellow and red ship respectively which are small and rather squat but otherwise identical. Control of them is nice and intuitive and their weapon system is one of the more appealing things about the game. Unlike most shmups, you see, your ship here is already equipped with all of the main weapons it can ever carry. There are four in total - a narrow forward shot, an even narrower forward and backward shot, a powerful laser, and a less-powerful spread shot. They can be switched between at will and, upon collecting the relevant icons, can also be joined by a different secondary weapon. One might add side lasers while another might add missiles, for example, and it doesn't end there. 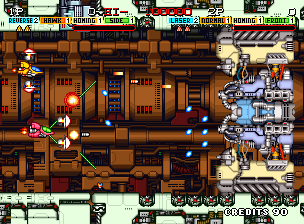 Also up for grabs are homing missiles which act the same with any weapon, and a pair of drone-like objects which don't. These are either deployed rolling around your ship, above and below it, or acting as a limited shield in front or behind it, depending on which weapon you have selected. You're also able to unleash a much more powerful 'charge' shot but these come at a cost. Each weapon has a different kind but they are only available if you have powered-up the weapon in question, and using a charge shot will reduce its power by one level. They are rather handy against the bosses though and it's a pretty good system overall which gives you a decent selection of weapons at all times but also leaves some room for powering-up, and even a little strategy is needed now and then too. Only in the later of the seven stages that make up the game do your basic starting weapons start to seem too weedy, but even then it's still not the hardest or most unfair of shooters. 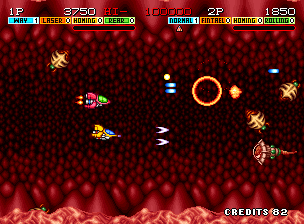 The stages are named Moon, Mechanized Unit, Alien, Cavern, Meteorite, Secret Base, and Core, and as you may be consequently be able to work out, they're mostly a mixture of spacey/planetary ones and enemy base ones. Aside from the spiffy charge shots, there's not really any flashy special effects or anything but what is here looks really nice to my eyes. It's all nicely drawn and has a lovely 'crisp' hi-res look and the selection of colours is perfect throughout. The backgrounds are well varied between stages too, but are generally a limited pattern repeated through the duration of each. The enemy sprites, which are a mixture of spacecraft and scenery-mounted guns, aren't particularly memorable in their design for the most part but they do benefit from the positive points already mentioned. The music and effects aren't bad either - only occasionally noteworthy but perfectly inoffensive and well-suited to the game. 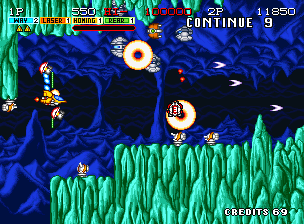 With my good friend's help I've now been fortunate enough to see Andro Dunos in its entirety so I can say with some confidence that I really don't see any justification for the scorn it has apparently had heaped upon it all these years. It's certainly not up to the standards of the near-flawless double whammy of Pulstar and Blazing Star, nor quite as good as SNK's own Last Resort, but it's important to remember that Visco's effort came before all of these and yet it remains pleasant to look at and listen to, enjoyable to play through, and good fun, especially for two players. It provides a good challenge too and doesn't really have any major faults. Aside from the weapon system it's not very original, admittedly, but this is a common fault of Neo Geo games and it's certainly not a reason to give this decent shooter a wide berth. If the other examples on the system are too hard for you, or even too extravagant, give this simpler effort a chance.