I think it's safe to say that if any one company can be credited with not just pioneering handheld gaming, but near enough creating it, it would be Nintendo. The Game & Watch series wasn't really my cup of tea, at least not by the time I got into gaming in the mid-80's, but I was in the minority and it proved to be a big success. Towards the end of that decade the Big N unveiled the spiritual successor to the G&W series, the Game Boy, and this was an even bigger success and has ended up being one of the most successful systems of all-time, handheld or otherwise. Both Atari and Sega tried to get in on the act and both failed. Surely, someone would have to be very brave or just plain crazy to try again? 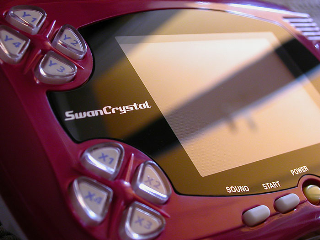 When I first heard about the WonderSwan, aside from some initial chuckles at the expense of the somewhat unorthodox name, I thought its creators, toy company Bandai, were indeed plain crazy, for here was not just another handheld console vying for a share of the Game Boy's market, but one that was technically inferior to its competition! Okay, its specs made for pretty impressive reading - it had a 16-bit CPU over the 8-bit one in Nintendo's machine, for example - but it had a black & white display for heaven's sake! The long-awaited Game Boy Color had been released the previous year so the decision to launch the WonderSwan with this antiquated screen was frankly baffling. However, when you stop to consider that it was developed by a certain Gunpei Yokoi, the not-insignificant fellow who designed the Game & Watch and Game Boy, then it would be foolish to immediately write it off. Yokoi-san was tragically killed before his latest vision was released but, immediately after its release in 1999, it actually didn't get off to a bad start in Japan.

The early success of this upstart handheld can largely be attributed to a deal Bandai made with Square which would see the immensely popular Final Fantasy series converted to the new machine, and it also featured lots of Digimon games which were also very popular at the time. It couldn't last though and the WonderSwan's initial popularity began to wane. Bandai swiftly moved to combat this by releasing the WonderSwan Color, and after that the further-improved SwanCrystal, but it was too late and the machine was sadly discontinued in 2003.

It didn't go without leaving its mark on the games world though and was home to quite a sizeable catalogue of titles. The machine never made it our of Japan, I don't think it was ever intended to, so that of course means that all of its games are in Japanese and many of them feature so much kanji that they're not realistically playable by non-speakers. In order to get a feel for the machine I did a bit of research to try and find some games that I could without too much bother and to that end I have selected these games to try: 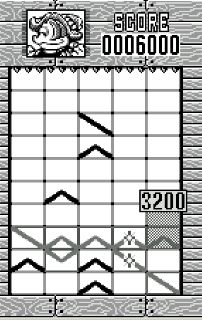 Any new console, questionably-timed or not, needs games if it's going to stand a chance and this was the first one released for Bandai's new handheld. It was named for Gunpei Yokoi and was presumably an attempt to ensnare new WonderSwan owners the same way that Game Boy owners had been with Tetris. Indeed, Gunpey is a simple puzzle game with even simpler graphics which does little to demonstrate the abilities of the console, but it does offer a lot of enjoyment. Unsurprisingly, it has an anime theme and features a resonable intro sequence to that end, and there's a decent selection of play modes too. They include Endless, Stage, Puzzle, Story, and Free, so there's plenty to keep you busy, as long as you like the game to begin with of course. The object of the game is to arrange the tiles so that the lines on them create a continuous line across the screen at which point the tiles in question will disappear. You can only move the tiles vertically though so it requires a bit of thought but it's not as fast-paced as most similar puzzle games so it's actually quite relaxing to play. Something it does have in common with similar games though, is how addictive it is! So, nothing terribly dazzling, aesthetically, but great fun all the same. 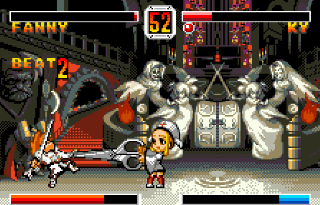 I must admit, I haven't actually gotten around to playing a Guilty Gear game yet (despite owning one - oops!) so this is my first foray into the strangely-named series that debuted on the PlayStation. I already knew they were one-on-one fighting games but I didn't realise how strange they are! The seven selectable characters available at the start in this one are a peculiar bunch but they have a good selection of fancy moves available which suit them well. They look superb too - distinctive and nicely animated, and their backgrounds are great as well. This is a game that will take me a while to learn the intricacies of, but any game that lets me play as a slutty nurse called Fanny who thrusts her rear-end at enemies is one that immediately has my attention! 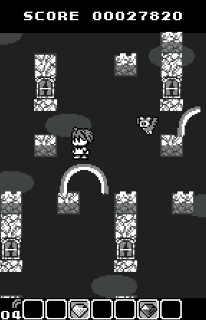 This Taito classic was a bit of a strange choice to release on a console with a black & white display and it's even stranger that it didn't get a re-release on the WonderSwan Color, but nevermind - most versions of Rainbow Islands are splendid so hopefully this one will be too! The first thing you may have noticed about it is the addition of a subtitle. There's a lot of intro screens with Japanese text which presumably explains this but all I can tell you at the moment is that it's Rainbow Islands as we've always loved it except the sprite is now a little anime girly. She moves around very slowly which can feel rather restrictive to veterans of the game and control of her is also somewhat sluggish causing some unnecessary falls, but the graphics and music are nice with lots of nice anime screens (including some 'fan service'), presumably to relay the (unintelligible) story, and there's even some giggly anime speech too! The levels seem to be as I remember them though, albeit with fewer enemies, so if you can live with the few faults, this is a capable enough version of the Taito favourite. 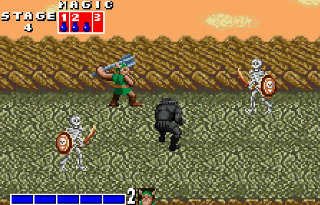 This was the game that initially drew me to the WonderSwan to start with. I've always been a fan of the Golden Axe series, especially the first game, so the prospect of a portable version was appealing, and it would also be a good measure of how good the system is. I was pleased to see that the animated title screen was present and correct and the play modes include the same selection as the fantastic MegaDrive version of the game. In-game, everything is about as good as you could reasonably expect. Obviously, the quality of the graphics have suffered a little but they're still impressive for such a small system. The music isn't bad either and near enough everything from the arcade game has been jammed onto the little WonderSwan cartridge making this a surprisingly solid version of the Sega classic. 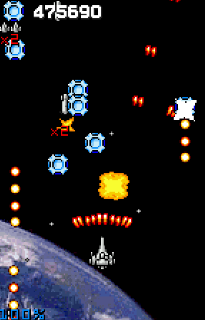 Now this one was a surprise! I assumed there would be a few shmups tucked away in the WonderSwan's back-catalogue but who would've guessed that there would be one like this? What makes it even more impressive is that it was apparently made by fans in tribute to the immense Radiant Silvergun. While it was never likely to better that legendary game, it's still a hugely accomplished effort. It features some thirty stages for one thing! Most of them are very short, admittedly, to the point where your completion time is displayed at the end of each stage down to tenths of a second - my best time for the first stage is around 12 seconds! Your ship starts the game already equipped with a pretty decent spread shot and there are various other power-ups to be found through the game's many stages too, which are a mixture of space and planet-based ones. The graphics are mighty impressive and the little WonderSwan can apparently throw around a very surprising number of sprites at once - things are verging on bullet-hell territory at times here! This has certainly been the most technically-impressive game I've seen on the system so far and it's a damn good one too.

Verdict:
Most consoles are appealing to collectors simply because they exist but it certainly helps if there's some good titles available to use on them. The WonderSwan is a rather obscure release though. Its critics would say it was completely pointless whilst even its fans must concede that it was an odd decision to release it when the Game Boy Color was already out and selling like hot cakes. On top of that, for non-Japanese speakers at least, there is a rather limited selection of games that can be realistically played on it and even less that are exclusive to the system. So, are there any reasons to own a WonderSwan?

Well, technically it's a pretty impressive machine, more so than I thought before I tried it out for this feature. Its audio abilities aren't great, although it's still capable of producing lots of catchy tunes and decent quality speech, but the graphics are surprisingly good. There's a sizeable pallet of colours available on the SwanColor and SwanCrystal with some games looking really nice, and some of the original black & white games don't look too bad either. The console also has a few nice tricks such as its ability to display games horizontally or vertically which is a real advantage with some titles as you can see above. The games themselves are the usual mixed bag but for any Westerners thinking of buying one, I would only say that games for it are quite hard to come by, and that some of them are pretty pricey as a result. I actually used to own a SwanCrystal for a short while but never found copies of the few games I wanted to buy for it (like Golden Axe which, as it turns out, I would've enjoyed a lot).

It's a pretty capable little machine then, more so than the Game Boy Color, and it has got some great games hidden amongst the ones that only our Japanese friends can play, but unfortunately the release of the Game Boy Advance mid-way through its life ended any chance Bandai's machine might've had. I mean, let's face it - Nintendo's handheld market share was (and still is) so overwhelming that it would've taken something really special to put a dent in it, and sadly the WonderSwan wasn't quite up to the task. Gunpei Yokoi's final offering to the world of videogames was certainly not without its positives but ultimately it proved to be too little too late.
Posted by RetroKingSimon at 21:36