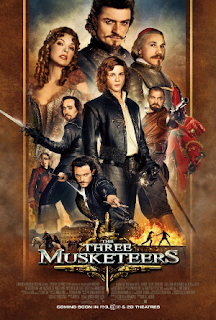 Tagline: "Every legend has a new beginning."

A number of the works of famed French author, Alexandre Dumas, have been adapted over the years but none more so than this tale of D'Artagnan and his new friends, the Three Musketeers. This latest realisation of Dumas' story opens with our three heroes Athos (Macfayden), Porthos (Stevenson), and Aramis (Evans) in action in Venice accompanied by Milady (Jovovich), Athos' lover. It isn't long, however, before they find themselves tricked and betrayed by the dastardly Duke of Buckingham (Bloom). Events are picked up again a year later where we first meet D'Artagnan (Lerman) who is headed for Paris to become one of these famous Musketeers only to find they no longer exist. He instead encounters the three former heroes rather despondent and down on their luck.

Needless to say, with the help of their cocky new friend it's not too long before they find their feet again, so to speak, and soon become embroiled in all manner of corruption and intrigue in the French Royal Court. It's a familiar story that's been well told by now, although not always in the same way of course, and this version is another slight variation on the theme. Suitably, given the extravagant nature of the surroundings for much of the film, everything looks rather nice! I can't vouch for their historical accuracy of course, but the costumes are particularly superb. I'm willing to bet that some, such as those of Buckingham and the young French king, Louis XIII, are somewhat exaggerated, but this is mainly down to them constantly trying to out-do each other in the fashion stakes and provides much of the humour found in the film.

The sets and locations, whilst still superb, are somewhat more restrained, but the most impressive visual aspects of the film (other than the girlies - hee hee!) are the outstanding action scenes. The special effects are of the standard we've now come to expect from blockbusters such as this but the numerous fight scenes are very well choreographed and shot as well and provide many of the highlights found here. The characters are also well cast in my opinion. The Musketeers themselves have good chemistry and have ample opportunities to impress, both physically and verbally, and the teen girlies will certainly enjoy watching D'Artagnan's scenes. Milla has a few chances to show off her well-honed action skills as well and I particularly enjoyed the scenes featuring the Duke of Buckingham, with Bloom apparently relishing the chance to play the bad guy and over-acting amusingly.

Also hogging his scenes is Fox as the weedy king and the conniving Cardinal Richelieu (Waltz) but most of the rest of the sizeable cast are charged with little beyond looking pretty such as Queen Anne (Temple) and the queen's Lady-In-Waiting, Constance (Wilde) who mostly just stands around looking angelic and vulnerable. Even Corden, best known from Gavin & Stacey, is well worth his screen time as the bumbling Musketeer's assistant. I wasn't sure what to expect from this film to be honest. From what little I knew of it beforehand it had the potential to be anything from horrifyingly bad to amazingly good. When the lights went down in the theatre and I saw the name of Paul W.S. Anderson though, I couldn't help but shudder. He is after all the man previously responsible for such disappointments as Alien vs Predator, as well as several rather poor videogame-to-film adaptions. Has he finally come good?

Well, I think I'm in the minority here, but I think he has! His latest film is one that has received little praise from critics since its release but I haven't heard anything in the way of complaints from movie-goers. Perhaps some of the critics missed the point. After all, it's not supposed to be a historically accurate period drama - it was meant as a rollicking action adventure to dazzle ones senses and in that regard it's a success as far as I'm concerned. The actions scenes and set-pieces are memorable and very enjoyable and the dialogue certainly fills the gaps well enough, at least. The result is a rather silly and unrealistic film, replete with Steampunk influences, but it's also one that looks superb and is tremendous fun to watch. It also appears that there may well be a sequel. I don't know about those stuffy critics but I for one am greatly looking forward to it!