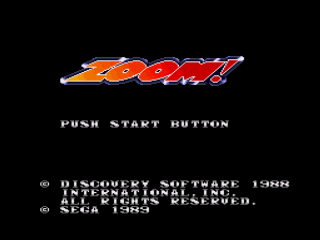 We've already taken a look at a few of the MegaDrive launch titles here at Red Parsley. Many of them were state-of-the-art at the time with flashy graphics and amazing soundtracks, but there were a couple that were somewhat less befitting the power and prestige of the world's first 16-bit console (okay, the first proper 16-bit console) and one of them was Zoom! A conversion of a simple puzzle game which first appeared on the rather less powerful Commodore 64 hardly seems like the best choice of game to showcase Sega's swanky new hardware, though, and it isn't an especially original game either! However, as us retro gamers know better than anyone, fancy graphics and ingenious concepts certainly don't hurt but few games actually require them to be enjoyable. 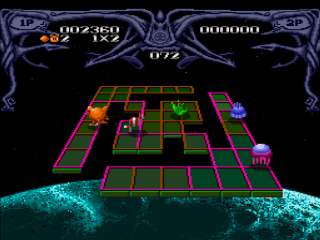 Anyone who's played a 1981 arcade game called Amidar will know what to expect here, for it's from this Stern game that Discovery Software have drawn their inspiration for Zoom. It takes place over thirty-six levels which are spread equally over six stages. Each level is a single-screen in size and, unlike Amidar, viewed from a 3D overhead perspective. They take the form of grids of different arrangements of squares from a maximum possible size of eight by eight squares. The object is to guide the strange creature called Smart (who looks like a potato with big ears on the cover of the game) through the game. Each level is completed by encircling each of the squares on the grid although Smart can only walk on the lines between squares. To make things a little easier, there is a simultaneous two-player mode as well. 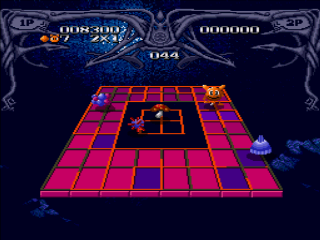 Patrolling each level are up to five different kinds of enemy creatures who will cause Smart (or Zoomer as he was known in previous versions - a much better name if you ask me!) to lose a life if he touches them. The most irritating ones are 'Rowdy Fingers' which follow Smart around and Spiler's which erase lines he has drawn around squares. He isn't completely helpless though as he can jump the enemies or smack them with his rubber ball which bumps them back. There are also various collectables which appear at random for a short while before disappearing again. They include an hourglass which freezes the enemies, bananas which slows them down, and sunflowers which make Smart invincible. The effect of all of these is of course temporary but there are also other items for bonus points and a feather which 'zooms' you straight to the next level. 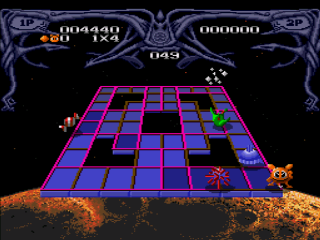 If you manage to clear the last level the game repeats them all but with different enemies and items and there's also a number of secret levels so it's not a game you're likely to finish on your first attempt! The question is, is it a game you would want to? Well, it did seem a little out of place next to some of the games that accompanied it at the MD's launch but it's actually a fun little game. Despite the initially poor presentation the graphics aren't too bad - rather simple and not particularly varied, but neat and colourful. The sound isn't too bad either - there are few tunes so they do get repetitive but they're also quite quite catchy and cheerful. I can understand Zoom not looking like a very attractive purchase at the time but I'm pretty sure I remember it being a little cheaper than the other launch titles. More importantly though, it's also a pretty enjoyable game and proves to be a rather addictive one as well.