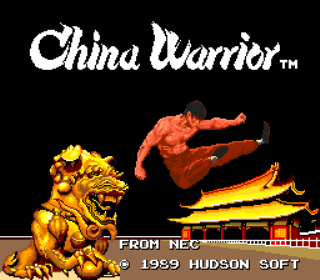 The 'Crap Games' feature here at Red Parsley has thrown up few surprises so far. It seems increasingly likely that most games that get crap reviews and crap reputations actually are indeed crap and thoroughly deserving of the scorn that they receive, but this particular example was a craply-reviewed game that surprised me a lot at the time. The PC Engine was a new and exciting console so its games must've all been equally amazing, surely? This was certainly the case for most of the early titles which wowed many of us jealous C&VG readers here in the UK, so how could Hudson of all companies release a stinker? To find out if Drunken Master, as I knew it at the time, really is as wiffy as I've been led to believe, I've bravely decided to give it a try. 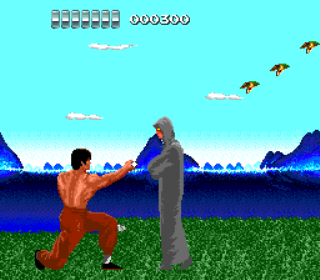 Released some two years beforehand in Japan, it's a game I already knew was a scrolling fighting game, and one featuring impressively large sprites too, but aside from the less-than-enthusiastic reviews, that's about all I did know. You play the game in control of a lone Bruce Lee-like warrior called Wang who is on a mission to topple the 'Dark Emperor' who resides in a castle. Between the start of the game and this castle are four side-viewed, scrolling stages which are each divided into four parts. First there are three normal stages, each ending with a boss fight, and the fourth is a bonus round. Wang automatically walks from left-to-right through the fairly short normal stages while lots of enemies advance towards him in single file. He can walk faster or slower and can stop altogether by dropping to one knee. He also has a limited but apparently deadly selection of moves with with to combat the evil goons. 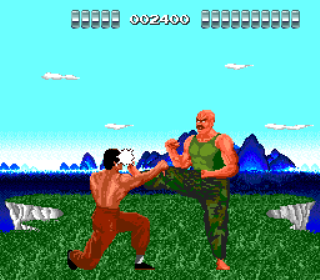 He can punch while standing or squatting and can also kick from a standing position or from mid-air by jumping. This isn't a huge assortment of moves but proves sufficient for dealing with the enemies. They do very little to provoke Wang and are defeated by a single strike to start with but later enemies become more cunning by ducking your attacks and some require more than one strike too. As well as the mindless hordes of enemies lining up to be kicked, there are also a number of dangerous objects. Things like butterflies, flames, stones, twigs, balls, and knives fly past every now and then which can be ducked, jumped, or 'defeated' in much the same way as the normal enemies, and there's also an occasional rolling boulder, an angry snake, or something of that nature to jump as well. Contact with any of these (yes, even the butterflies) causes our delicate hero to lose part of his energy meter. Fret not, however, as more energy can occasionally be found floating in the air. 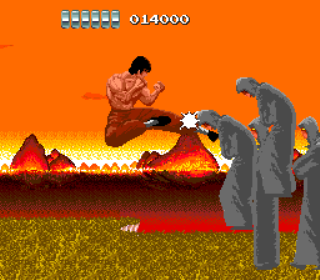 It's a concept that's far-from-unique. The whole fighting game genre was born with Kung Fu Master back in 1984 and there's little in China Warrior that can't also be found in Irem's earlier game. Except for the giant sprites of course, but do they add anything to the enjoyment of a game of this type? Well, the graphics generally are quite good. The backgrounds are pretty decent and change between most stages, or at least their colours change, and the scrolling is nice and smooth and even includes some parallax. Wang is nicely drawn and animated too, but most of the enemies are generic, lacking in variety, and not nearly as well animated. Some of the bosses look pretty good but even these are sometimes repeated quite often. Every stage of the first level features the same boss, for example (maybe they're triplets, but even so). 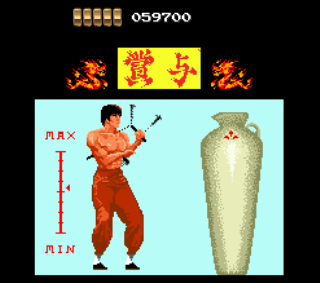 The music and sound effects are pretty good too but it's those graphics that were used as the game's main selling point and, whether you think they look pretty or not, they don't really do you any favours as far as the gameplay is concerned. Their size inevitably means you can't see very far in front of you so you get little warning of approaching enemies or objects. This makes playing it something of a reaction test. Having said that, it's not an especially difficult game which helps lessen this inconvenience. Flying kicks work pretty well against most enemies and it's even possible to take out three or four of the shrouded dumb-asses with one kick if they're close enough together. It can be a pretty frustrating game now and then though, and it has a few small annoyances which combine to equal an experience which isn't altogether wonderful. 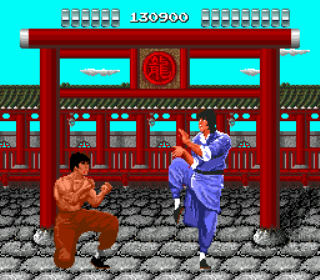 For example, the bosses have energy meters much like the one Wang has but if you die, it's all the way back to the start of the stage, even if you're one punch away from defeating them. Grrr! It's also a bit weird that the bonus stages for some reason charge you with smashing up giant vases with nunchakus. Why can't Wang use them in the main stages? Some weapon power-ups and some stronger enemies to use them on would've livened things up a lot. The most annoying thing about China Warrior, however, is the unresponsive controls and sluggish movement of Wang. It's certainly not a horrifyingly bad game and can be fairly entertaining in short bursts, but if Hudson had concentrated on making a well-designed and enjoyable game as they usually do rather than a tech-demo for NEC's fancy new console, we could've had another winner here.