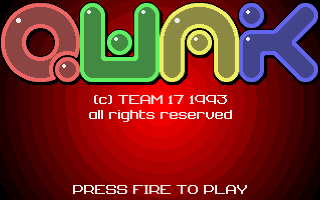 Most video game developers and publishers have a 'golden age' at some point and few would argue that Team 17's was on the Amiga. They produced a string of fantastic games for Commodore's powerhouse during the latter half of its life covering almost every genre, and one of them was Qwak. Unlike most of their other games, however, this is one that I didn't play until fairly recently, and it was then that I was surprised to find that it wasn't an Amiga game at all. Well, not originally, anyway. Indeed, this amusing little game by Jamie Woodhouse first found release on a couple of Acorn systems in the late 80's before Team 17 resurrected it for 16-bit gamers to enjoy and, as you might expect, they also applied a significant coat of polish while they were at it. 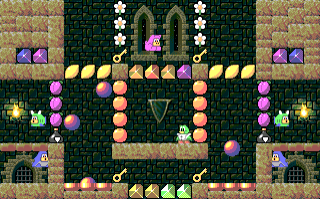 The basic premise remains the same, however, and that is to progress through all the platformed stages. I'm not sure about the original but here there's a not-unimpressive eighty of them to keep you busy and they are spread over eight themed worlds. As you may have guessed from the title, the star of the game is a green duck who can be joined by a blue companion for some jolly two-player festivities (sound familiar?) and their job is simply to collect all the keys on each stage in order to unlock the exit so they can proceed to the next. Each is a single screen in size and is littered with lots of bonus items and collectables which are almost equalled in number by the many scary monsters that patrol the platforms. 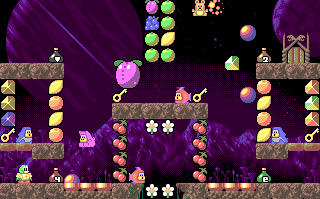 There's no story to explain the bizarre situation our heroic ducks find themselves in with the game instead leaving you to draw your own conclusions as to their motives. They have apparently lost the ability to fly though, which could have something to do with it, and this leaves them to run and jump around each stage. One ability they do have is to throw eggs. Sensibly but inconveniently they have a limited supply of these but they are a precious commodity as they can be used to take out the monsters. The small ones near the start of the game fall after a single strike but later ones can take more punishment. There is also some larger enemies too. These appear occasionally on normal stages and collectively as guardians at the end of each world. 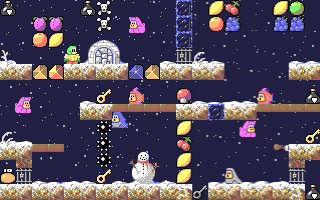 Touching any of the evil beasts they encounter will of course cause our pond-loving friends to lose a life but luckily they can replenish their supply of eggs during the course of the game. By far the most common collectables to be found are the many fruits with litter each stage and even rain from the sky on some stages! These earn you points but also top up your egg supply at the end of each stage. There's also lots of other, less common items too. Some are behind locked gates which need a special key to access but most are just dotted about the platforms. They include gems for bonus points, pendants, flowers, mushrooms, bulbs, oil, and glue, all of which have some special use, but arguably the most useful items are the potions. There are six different kinds and they upgrade your egg power, give you shields, allow temporary flight, and things of that nature. 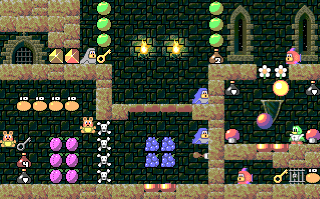 The shields are probably the most helpful items of all since there are also some less helpful things around such as skulls and spikes which don't have a very positive effect on the poor old ducks. The stages also have a time-limit but when it expires, rather than instant death as you might expect, it starts raining large spiky balls! It's a nice idea and gives you at least a small chance to still reach the exit. Another great idea is that the ten stages within each 'world' are played in a random order each time you play too so there's always a little variety. There's lots of great touches like this and they go a long way to adding to the game's already tremendous appeal. They even found room to squeeze in some secrets! 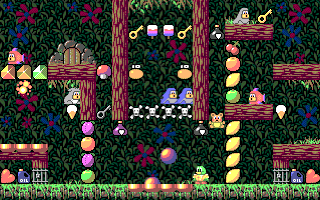 Technically this isn't the most demanding game on Commodore's machine but that doesn't stop it from being a very pleasant and happy experience thanks in part to the detailed, colourful, and well-drawn graphics and the catchy, upbeat music. The levels are almost all nicely-designed and quite varied as well. They feature the usual kind of themes (caverns, snow/ice, grassy/woodland, futuristic, Egyptian, castle, etc) and the sprites are nice too. The two ducks are simple but appealing characters and I'm not even sure what enemies are. They're peculiar creatures for sure, looking a bit like animals such as fish, bees, and rabbits, but with cartoony, human-like faces. Whatever they are, they're amusing things which I often feel bad for killing as they bounce, walk, and fly around the screen. 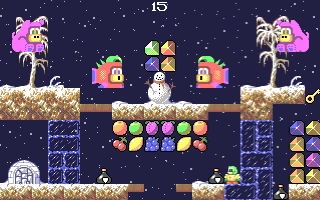 Overall then, it probably sounds like you've seen it all before and it's true that Qwak isn't a particularly original game - it's frequently compared to other classic single-screen platformers like Bubble Bobble and, while it doesn't quite match the heights of Taito's all-conquering game (what does?), it's still a more than accomplished and highly enjoyable effort. There's lots of stages, secrets, and even 'challenge stages' full of millions of bonuses. The difficulty curve is perfectly graded as well, which is helped by intuitive and flawless control of the playable characters who can never be blamed for a premature death. All this splendour combines to equal one of the most charming, enjoyable, and downright addictive games on the Amiga which is fantastic fun for one player and even better for two. I love this kind of game when they're done well so I expected this to be good. Happily, Team 17 did this one very well!