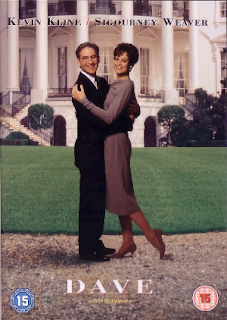 Tagline: "In a country where anybody can become President, anybody just did."

Times are hard once again here in RKS land, and with no recent cinema visits I thought I'd take a look at another old favourite in the hopes of turning more movie fans onto its charms. It's a film that stars Kevin Kline and... umm... Kevin Kline (chortle) with the two Kevins playing both the character of the title, Dave Kovic - a nice, charming, helpful, everyday guy who runs a temping agency, as well as the President of the United States, Bill Mitchell, who isn't quite as pleasant. Dave's agency is his main source of income but he also makes a few 'bucks' on the side doing impersonations of the President, so he's already aware of the similarity he bears towards the Commander-in-Chief but perhaps he's not aware of just how close the resemblance is.

After his latest appearance as the 'President', Dave finds himself propositioned by Duane Stevenson (Rhames) of the Secret Service to actually double for the President for the evening while he turns his attentions towards a "patriotic secretary". Predictably enough, the real President has a stroke meaning the ruse has to be kept up for a while longer and Dave soon finds himself being given a crash course in White House operations by the ambitious Chief of Staff, Bob Alexander (Langella) and conscientious Communications Director, Alan Reed (Dunn) - the only ones other than Duane who know Dave's secret. Of course, it isn't long before he finds himself embroiled in the schemes and various relationships within the White House, including a somewhat less-than-loving First Lady (Weaver).

It may all sound very silly, and there are plenty of comedic moments, but Reitman and his crew have done a fantastic job in making everything as realistic as possible. I've never been in the White House before, admittedly, but the sets all seem very genuine to me, and there's dozens of cameos throughout the film from real-life politicians, celebrities, and media personalities, which adds to the air of authenticity a great deal. It's not a film that's too demanding of any of the cast but Kline is superb nonetheless as the captivating title character as well as the dastardly President, and Langella is also noteworthy as the 'bad guy' Chief of Staff, and it's great fun to see the two of them gradually coming to loggerheads as Dave gets the hang of things and realises the potential benefits of his new "temp job".

Most of the other characters don't really have a huge amount to do except for the First Lady whose icy demeanour slowly thaws, and also great value are Rhames as the self-conscious Presidential body guard, Grodin as Dave's best friend, and Kingsley as the Vice-President - actually one of the only honest politicians in the film! Of course, it is a little unrealistic to think a President, or indeed any other politician, could be as nice, honest, and selfless as Dave is, but it's nice to imagine what it might be like and this fantastic feel-good film does a great job of demonstrating it. The memorable script and great ensemble headed by a superb lead performance make Dave a wonderfully appealing film which will surely keep a smile on your face for the entire running time.