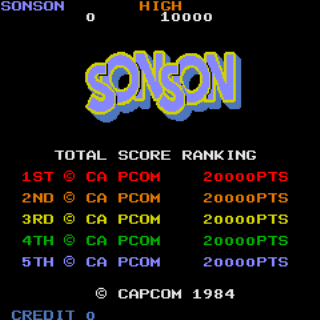 There's been millions of completely original games over the years but developers are also happy to take some help now and then. Accordingly, there's also been a huge number of games based on films, TV shows, celebrities, and goodness know what else, but classic Chinese literature? Apparently so, for this early Capcom game is based on the 16th century novel known as Journey to the West! Actually it didn't really surprise me all that much once I learned that the novel has been adapted before and is more commonly known, in the West at least, as Monkey! The story is a potentially great source of entertainment though, whether that be film or game-based, and SonSon is of course the latter. Due to its age, is a rather basic interpretation but, much like the amusing TV show, it's also one that's proven to be an enduring cult favourite so it's high time I had a more detailed look at it. 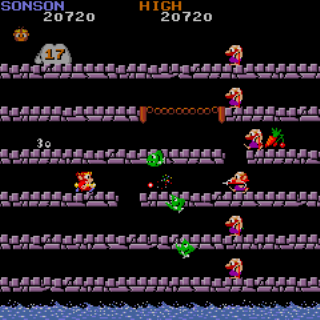 The Capcom version of Monkey Boy's adventure takes the form of a left-to-right, auto-scrolling platform/shooting game. It's a one or two-player game so SonSon can be joined by his best friend, TonTon. Alone or not though, his job is to battle through twenty enemy-filled stages with the ultimate objective of ridding the land of the evil which has covered it in darkness and kidnapped the villagers. Each stage has six tiers of platforms running all the way through it which are spaced roughly an equal distance apart and each has numerous small gaps in it. With your help, SonSon (and TonTon) run along these platforms until they reach the end of the stage. They can jump up or down floors at will and can also walk slower or faster on the constantly-moving surface. Streaming onto the platforms from both directions are groups of monsters. Some of them walk along the platforms, others jump up from the water below, some can even fly. Luckily, SonSon has a magic staff and TonTon has a similarly-powered pitchfork with which our heroes can shoot the pesky interlopers. 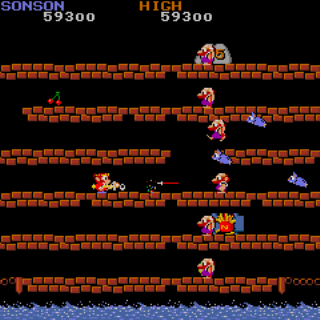 There's not an awful lot more to it than that either. It's a fast-paced game where you can't afford to stand still for more than a second or so. The only time the scrolling stops is when it's time for a boss fight which involves five guys on different floors of what looks like a castle. These turn up every five stages or so but they don't exactly offer a chance to catch your breath as they are accompanied by some of the standard enemies too which include various human-like (or at least humanoid) rapscallions as well as various beasties like bats, frogs, and dragonflies. Whether you're fighting a boss or traversing a strage however, keeping on the move jumping up and down floors regularly and shooting or avoiding the many monsters is the best way to progress and it's great fun too! The graphics and sound aren't bad for the game's age either. The backgrounds are all black but the platforms change every stage and new monsters are also introduced quite regularly. Similarly, the sound effects are minimal but the Eastern-flavoured music is quite nice. 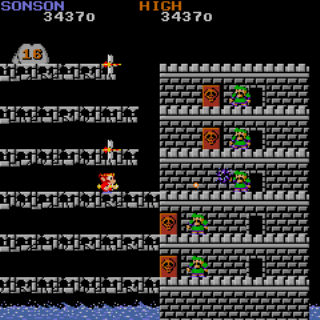 It's a good game for high-scores too as there's lots of fruits and flowers appearing and disappearing from the platforms seemingly at random which are worth various bonus points, and you'll get way more points for taking out a whole group of baddies than you will for an odd few. Capcom must be fond of this character as he (or she - there's some confusion over SonSon's gender!) has been resurrected much more recently in games like Marvel vs Capcom 2. Most modern gamers who play as him in that game, however, probably aren't even aware of his proud heritage and that's something that should be rectified. SonSon is a pretty basic, no-frills game but it's also a well-made one which is still perfectly enjoyable, especially when played with a friend, but even with one-player its manic action proves to be very addictive! It may be showing its age a bit now but there's still some fun to be had with this Monkey Boy's adventure.