It was my discovery of the mighty OutRun in the arcades of Torquay that first brought the Sega name to my attention and my subsequent acquisition of their splendid Master System console endeared them to me further, but it was when the MegaDrive arrived on the scene that I truly became ensnared by their magnificence, twenty long years ago now. 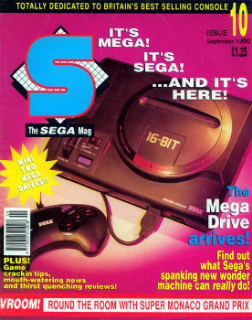 It must've been around 1988 when I got my Master System. I quickly became very fond of it and remain so today but it was never a console that was gifted by a huge range of titles. There was enough to support a monthly magazine though which was simply called 'S'. Although this magazine went on to become better known as Sega Power and would last right up until the end of the Saturn's reign, in the late 80's it was a pretty small magazine, composed of few pages, but midway through its run it started featuring news of a new and very exciting-sounding console. My interest was piqued immediately but I grew more and more excited the more they featured news and even some tantalising screenshots of some of the games the privileged few could expect to play on this new wonder-machine! The excitement and anticipation grew day by day, for my good friend Luke too. Then, one weekend I dropped by a different friend's house for the first time in a while, only to be greeted by a sight of special magnificence - a gleaming new imported Japanese MegaDrive! The sight of this was quite overwhelming in itself and the expectation increased when he flipped the power switch to the 'on' position.

I didn't know which game was 'slotted' into the shiny console, it didn't matter. The 'Sega' logo appeared on the screen in a new and exciting way. The screen flashed .... a figure jumped up out of sight, a shurikin flashed across the screen accompanied by a sound effect, another followed it .... EXPLOSION!! Lightning ripped across the sky. A sword appeared. It expertly deflected the shurikins. The person holding the sword is seen .... It is Joe Musashi - master ninja! All this while amazing music coincides perfectly with the action. The title appears: The Super Shinobi! It was unlike anything that had ever gone before it - even outdoing most arcade games of the time, and nothing from the actual game had yet been seen!

The events of this day remain the most a new console has impressed me upon seeing it for the first time. My friend and his brother had some other imported games as well but none were quite as dazzling as this first one. A few months went by and the MegaDrive has finally been launched here in the UK so my friend decided to switch his Japanese console for an official PAL one. Until, that is, he discovered that it ran slightly slower than a Japanese machine so he decided to sell it and return to his imported one again. This was shortly before Christmas so I seized the opportunity to take it off his hands by 'suggesting' to my parents that it would make an ideal Christmas present for me, and to my not-inconsiderable delight - they agreed! It was then a long wait until Christmas morning of course, but when it did arrive it was a moment to behold. I played each game as I unwrapped them and can remember phoning my good friend (and fellow MD-admirer), Luke, so he could hear the awesome music as I played! Ah, what a great day that was, and the beginning of a long relationship that still holds up today. My friend and his brother had bought five games for their UK MD before reverting to its Japanese forebear and they were: 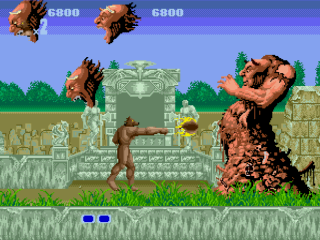 Remember when consoles used to come bundled with a game? It was a great idea and this is the one that Sega chose to accompany their fancy new console, to start with at least. It was a bit of a strange choice though. I guess it was only natural to choose a conversion of one of their own arcade games but wouldn't a popular one have been a better choice? Not only was Altered Beast a little unloved but it also did little to demonstrate the splendid abilities of Sega's latest machine - it was near-enough arcade perfect but the coin-op was hardly the flashiest one around to start with. Not only that but the Master System already had a reasonable version of the game itself! Surely the idea was to show everyone that the MD could do things the MS could only dream of? Instead, it showed us that the MD could do something the MS had already done, just slightly better... 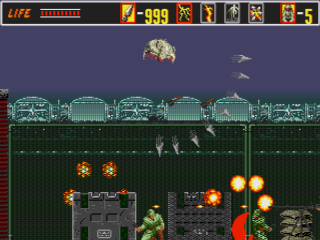 This, however, is the kind of game Sega should've bundled with it. As mentioned, it was the first MD game I ever saw in action and it had quite an effect on me - a true 'gaming memory' in itself! It wasn't just all flashy intros either. The soundtrack by Yuzo Koshiro and amazing graphics were indeed stunning but they merely complemented what was an amazingly-well-designed run 'n' gun-style adventure rather than diverting attention from any flaws. It was a big game, with nearly every one of the side-scrolling stages having a unique feature, and was packed with the kind of attention to detail that I couldn't have imagined mere months earlier whilst at the same time staying true to the game's roots and continuing the evolution of the series, and arguably the whole genre. Everything a launch game (and a sequel) should be and still a fantastically playable game today. (full review here) 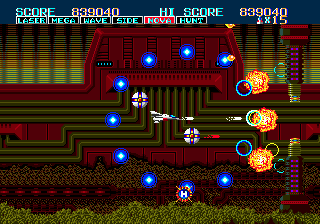 Long since eclipsed by the much more famous and revered sequels that would go on to reign supreme at the head of the genre on the MD, this creative blaster was an unfairly-overlooked game in the MD's early days but was actually a top game in my opinion, and made for another great launch title too. The graphics were neat, colourful and varied and the music and sound effects were superb. The alternating stage styles made for a nicely varied and challenging game too - the overhead, multi-directional stages from the original Thunder Force were expanded upon but Techno Soft also added an (almost) equal number of more traditional side-scrolling stages with bosses and all the usual stuff. One of my favourite things about the Thunder Force series has always been its weapon system and here's where is started, and since this game marked the last appearance of the overhead sections, some weapons were never seen again. A great shooter which I still play regularly today. (full review here) 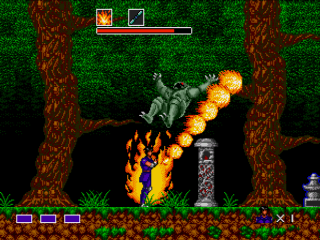 I always remember seeing this game reviewed under its Japanese name of Kujaku Ō 2 and it was this enduring memory that led me, many years later, to discover that it's actually the sequel to one of my favourite MS games - Spellcaster! The first game was an arcade adventure with some RPG overtones but this game was very much of the platform/run 'n' gun variety featuring a nimble character who could collect and use a variety of magics over the large and atmospheric game-world. It's a bit like a mystical, ogre-filled version of Revenge of Shinobi or, as I recall a magazine of the day cruelly putting it, "a poor-man's Ghouls 'n' Ghosts". Whatever you want to compare it to, it's an underrated and enjoyable adventure if you ask me, and one I was pleased to have as one of the earliest parts of my MD collection. 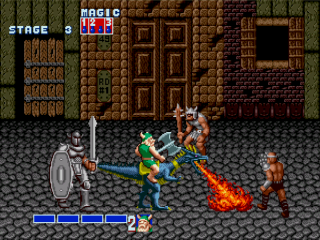 Here we had another game that was already available for the MS. Crucially, however, this time it was both a significant improvement over that already-good version, and it was a mighty fine game to start with! The MS tried its best but had to drop the selectable characters and the two-player mode as well as losing a lot of audio/visual quality. This skillish MD version actually improved on the arcade version! The graphics were as detailed but more colourful, the music was superb, plus it even added a whole new stage as well as a couple of new play modes, one of which was a more like a one-on-one fighting game! Golden Axe is a great game in my opinion and this MD conversion was one of the first 'better-than-arcade' ones I can ever remember seeing. It would've also made a fantastic pack-in game for the console too, especially if Sega had thought to include a second controller.


So there we have it - my first five MegaDrive games but certainly not my last. Sega's 16-bit wonder would go on to dominate my free time over the coming months, cause some arguments with fellow games, solve some others, and even now is still by far the console I've spent the most time on. At my peak I had around 70-80 games for it and, unlike some consoles I would go on to own, all the games were played thoroughly. It's also a console that's aged extremely well in my view - many of its games are as playable now as they were the day they came out and that must surely be a testament to Sega's awesomeness when they were at their absolute best!
Posted by RetroKingSimon at 18:53