I think it must be an indication of my gaming preferences and heritage that I've seldom been able to 'get' some of the most popular computer games that were doing the rounds during the 80's. A great example of that is Impossible Mission - a supremely popular game, mainly on the C64 which I never owned admittedly, but I did later buy a copy of it for Sega's splendid Master System. I found it an enjoyable, though very difficult game, but the puzzle elements caused me great confusion and in the end I'm ashamed to say I gave up on it. If only there was a similar game but with less puzzley puzzle bits... Before long I discovered that there was - Zillion - an unusual title even now in that it isn't an arcade conversion and is exclusive to the MS which meant that not many people had the opportunity to play it. In the opposite scenario to which I usually find myself, however, I did have such an opportunity and I enthusiastically took advantage of it. 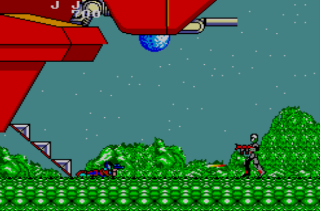 Like many Japanese games, this one is based on an anime series, albeit a shortish and relatively unknown one, even in Japan. Both the anime and the game star a fellow called JJ who is a member of the medieval-sounding White Knights, a peacekeeping force who are out to destroy the evil Noza Empire's base which is located on the 50's sci-fi-sounding 'Planet X'. At the start of the game, the White Knight's mothership has just landed on Planet X leaving JJ to infiltrate the underground base, rescue two captured comrades, and set the base's mainframe computer to self-destruct. Sounds simple enough! After a short jog across the planet's surface, JJ descends into the complex via a mysteriously-unguarded lift. From here he can make his way anywhere he wants really. The lift shaft and corridors lead to numerous rooms, each a single-screen in size. These usually contain various traps, some capsules, a computer terminal, and often a door to another similar room which will be locked.

JJ is less agile than the C64's most famous secret agent but he can still jump around about the place (surprisingly high, too) and can also crawl along the ground. He packs a gun, too, which is used for destroying the sadly-infinite enemy guards who are found in pretty much every location - the planet's surface, the lift corridors, and many (though not all) of the rooms themselves. Contact with their shots (though not the enemies themselves), or some of traps in the rooms, depletes JJ's energy reserves, although he can get a 'top up' at any time by returning to the mothership. The gun is also needed for breaking open the capsules which contain power-up items including more energy, more powerful guns, goggles (which allow you to see some of the otherwise-invisible traps), ID cards (which are needed to access the computer terminals), and floppy disks which are needed to access the main computer.

More commonly found in the capsules, however, are code symbols. Each door has a four-symbol code but capsules only contain one so you need to bust open four in any given room, remember (or write down) the symbols, then re-enter them at the computer terminal. These capsules are, unsurprisingly, often protected by guards or traps which include energy-sapping barriers, conveyor-belt sections of floor, automated guns, mines, or trip-wires which trigger an influx of guards. The traps can all be turned off by entering a simple code in the terminals although, unlike entering door codes, you won't get your ID card back so it's best to work around the traps if possible. JJ is reasonable for this but, splendidly, you can also control your two kidnapped comrades once you're rescued them. They include the awesomely-named Apple, a girlie who is predictably more agile than JJ and can jump higher but also takes more damage, and Champ, a bulky fellow who shrugs off enemy fire more easily than the other two but can't leap around so well.

These two idiots also have their own energy reserves, so once you've rescued them you then basically have three lots of energy to get through the game with. Well, I suppose technically you have infinite energy if you can be bothered to go all the way back to the mothership every time you're running low, but either way it makes Zillion a much easier and more accessible game than Impossible Mission, for me at least. That said, it can occasionally be rather unfair, as with the 'unavoidable death loop' I encountered. Contact with enemies or their fire knocks JJ (or whoever) backwards, you see, so if enemies are present very close to the point you enter one room and leave another, you can end up getting knocked backwards and forwards between them until you die. Boo hoo! Still, it only happened the once so far and the rest of the game is fairly accommodating despite some slightly iffy controls, mainly regarding the characters' jumping abilities. Practise makes perfect though, although don't expect to be able to play though the game quicker on subsequent runs - the door codes are randomly generated each time you play!

The presentation is of a high standard throughout the game and includes a few cut-scenes (including some girlie on the mothership crying if you die - unrequited love?) and the in-game graphics are quite good too. The sprites look a little weird to be honest (it looks like JJ has a blue face for one thing) and the way they shuffle along the ground is quite amusing. There's a bit of flicker amongst the enemies when two or more are close together too, but there's been a bit of effort to keep the nicely-detailed backgrounds a little more varied than I had expected. The audio is also good - there's only one main tune but it's a catchy one and the effects aren't bad either which means that, all things considered, Zillion is pretty spiffy! It's a pretty big game, spanning 136 screens I believe, and most of them are well-designed. You'll need to return to some later (with a different character or more powerful gun, for example) and the sense of progress is keenly felt. Impossible Mission may well be an all-time great as far as most gamers are concerned, but my simple-mind would much rather tackle this lesser-known clone!