My taste in films has, dare I say it, matured somewhat over the years, but I still enjoy a good action blockbuster now and then so it's remarkable that it's taken me so long to get around to watching the adventures, or should that be misadventures of Jason Bourne. I already knew that they were based on a series of novels by Robert Ludlum but I didn't realise how long they've been around - the first one was published way back in 1980 so I'm surprised it hasn't been 'Hollywood-ised' before. Nonetheless, Doug Liman (of Swingers fame), long a fan of the novel, did eventually get the ball rolling and slightly surprisingly cast Matt Damon as the titular character who, as we soon learn, is an ex/rogue/lost CIA spy/assassin.

That means, like so many films and TV shows in recent years, the stories relayed in the Bourne novels/films are ones involving various secret 'black ops' programmes run by American government agencies, usually by corrupt and/or power-hungry directors or involving rogue agents, etc, etc. I'm sure it all sounds as familiar and unoriginal to you as it did to me, but let's not forget - the stories, or at least the first one, and the general premise involved were conjured up more than 30 years ago now when tales of our sinister governments were much less prevalent. For the film versions, the stories were of course modernised but the basic premise remains the same - Jason Bourne is a covert operative for 'the agency' who's missing, presumed dead after a botched mission... 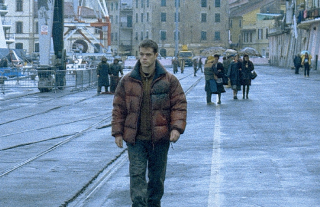 We first meet Bourne, if indeed that is his real name, floating in the Mediterranean Sea. He's found by an Italian fishing boat whose crew discover he has two gunshot wounds in his back and no memory of... anything! A short recuperation period later and he's dropped off to pursue the only clue he has - details of a safety deposit box in Zürich. The contents of this, as well as some newly-discovered skills and the emergence of one or two rather nefarious characters who are soon on his case, quickly lead Mr. Bourne to the conclusion that his prior life may not have been completely normal. The fact that we're all as clueless as he is to begin with is what gives this first film its initial appeal and the more he finds out about himself, the more fighting and car chases and escaping from stuff he seems to get involved in! A good start which leaves enough unanswered questions so as to make the sequel one to look forward to... 8/10 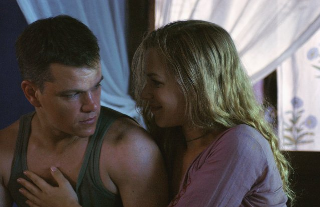 When we left Jason it looked as though he'd gone off into hiding somewhere, and indeed that's where we find him at the start of the second instalment. That wouldn't make a very interesting sequel though, so sure enough it's not long before he's heading back to Europe seeking revenge for the death of a loved one only to find he's been framed by those pesky Russkies and as a result branded a traitor by his enraged former employers! Poor old Bourne. For all the new characters and motives though, the action here is pretty much the same as in the previous film and despite its relatively fast pace I did actually find myself losing interest now and then. There are some great scenes though, including a chaotic car chase through Moscow - Paul Greengrass does a near faultless job in that regard after taking over from Doug Liman as director - but it's just not as captivating as the previous film for me... 6/10 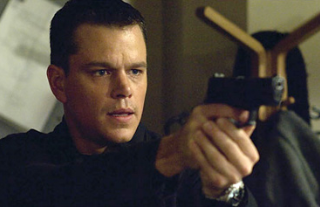 The final (to date, at least) Matt Damon-starring instalment of the series picks up the action immediately after the close of the previous film before later heading to Paris so Bourne can attend to a personal matter. However, he soon learns that a London-based journalist has been looking into various secret CIA operations, including ones involving our favourite amnesiac, and reporting his findings. As all movie fans know, this kind of thing is just asking for trouble, and sure enough our intrepid reporter soon has his hands full! This incident also points Mr. Bourne in the direction of another shady agency chief, who's fled to Tangier, and ultimately back to New York where he might finally get some answers. It was probably my knowledge (or at least suspicion) of this that helped me enjoy Ultimatum more than the previous film as it does otherwise follow a similar format again but there are some superb action sequences - possibly the best of the series - and some great performances too... 7/10

I may have waited a long time to see these films but that hadn't dampened my enthusiasm for them - I had been hearing people raving about them for years after all - but when I finally did see them all, I couldn't help but feel a little disappointed to be honest. Technically they're excellent; the direction, soundtrack, post-production, and all that stuff is all faultless, and the acting is also decent enough. I was initially sceptical as to whether Matt Damon could pull off an action role like this but he quickly and completely convinces, especially in the impressive (and realistic-looking) fight scenes. That said, the amount of personality and sympathy he brings to the role is more questionable. Pretty much all the other casting is good as well - Chris Cooper, Joan Allen, Brian Cox, Scott Glenn, and David Strathairn comprise the assorted CIA suits, Paddy Considine makes a welcome appearance as the reporter in Ultimatum, Franka Potente is on eye-candy duties, and there's a load more as well.

Not only are they technically sound but they're all very entertaining films in their own right, so all things considered they should be pretty damn essential viewing shouldn't they? Well, there's not really much to separate the three instalments, but that's partly a problem as well. I watched them on three successive days only around a month ago but while writing this feature I was actually finding it quite tough to remember a great deal about them. Even now if you showed me a short clip, in most cases I'd probably be unsure which of the three films it actually came from!

I guess the consistency is impressive but it also means there's little that stands out about any particular film, and that includes Bourne himself - he doesn't know who he is, and we know little more, so do we really care what happens to him? I didn't really, to be brutally frank, and certainly didn't look at him the same way as I look at someone like Jack Bauer who is far less... robotic for one thing; it was the action and suspense that kept me watching here, not concern for Jason's well being. So, I suppose the way to look at them is: three decent individual action films, but less appealing as a series. The only question now is: do I watch The Bourne Legacy? Based on these three I suppose I should if and when I fancy an action fix but I'm not likely to get any more than that...
Posted by RetroKingSimon at 10:18