As any keen gamer will tell you, there are several ways to spark our interest in a new releases, and one way that publishers try to do just that is with adverts. In my favourite gaming era, these usually took the form of one page ads in magazines, and one that always caught my eye was for Puffy's Saga. It featured a very appealing-looking Pac-Man-like yellow sphere trapped in a labyrinth filled with treasure but scary monsters as well. I like maze games and I also like appealing characters so I was immediately compelled to try and help Puffy out with his Saga, but then, for reasons that remain mysterious to me, I didn't, and over the ensuing years the game passed out of all knowledge. Until I remembered it a couple of weeks ago... 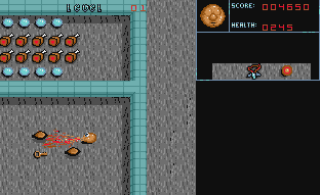 Since then I've been eager to finally explore another addictive maze game with an endearing main character, but that's not quite what I found. After an unexpected choice between Puffy and an apparently-female version (with lipstick and a bow on her head, obviously) named Puffyn, or indeed both of them if you want a two-player game, you're thrown straight into the first stage which is immediately reminiscent of the great Gauntlet. Accordingly, they are viewed from directly overhead and scroll in all four directions. Also like Gauntlet, the object of each stage is simply to escape it and move on to the next. This is done by collecting small pill things called 'Goms'. The first stage has only one while later stages have more of them, sometimes many more, as they get larger and more complex. 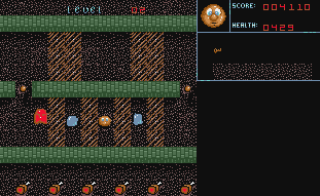 Attempting to prevent you are numerous evil monsters which include ghosts (which rush at you), acid puddles (which patrol set areas), dragons (which are stationary but breath damaging fire), snakes (which are stupid), and eyes (which can only be stunned). Puffy has unlimited use of a peculiar yo-yo-like weapon to take out these idiots (except the ones you can't kill) but it's best to exit each stage as quickly as possible as his health gradually drops already, but contact with the enemies obviously drains it much quicker. There are 'joints of lamb' dotted around which will boost his health though, and a few other things including keys for opening the mandatory doors which festoon the mazes, as well as speed and shot power-ups, a shield, invisibility, and repellancy (makes the enemies scared of you). 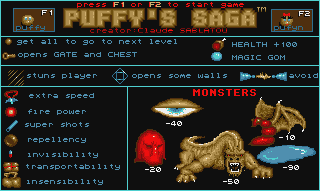 All of the power-up items last for a limited time but there is also a 'magic gom' which lets you switch between characters (Puffy is slightly stronger, Puffyn keep items for longer). As well as the enemies, there are of course a few traps/obstacles such as stun tiles, invisible walls, and energy barriers, which all probably sounds very familiar, and indeed Puffy's Saga is little more than a Gauntlet clone, and a sub-standard one at that. There are many of those around of course, but near enough all of them at least try to improve or add to the basic formula. Sadly, there's not really anything good about this one. The graphics are reasonably varied but the colours are dull, the detail is poor, with even Puffy and Puffyn possessing little in the way of character, and the scrolling is awful. The audio is even worse, consisting of horrible, annoying sound effects and no music at all. There is some sampled voices but they sound like Adam Sandler doing an impressions of a Mexican maid! 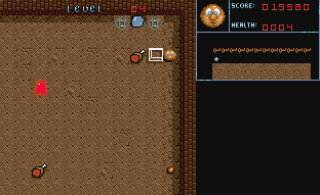 Even if the gameplay was tip-top, the audio/visuals would deter most players I deem, but unfortunately things are no better there either. Puffy moves around by hopping in quite large steps which makes precise movement next to impossible, some of the enemies move just as fast as he does (and almost always outnumber him too) and, as mentioned, some of them can't even be killed. On top of all that, the design of the stages is terrible as well. These factors combined to equal a very difficult game. However, some difficult games keep you playing as they're satisfying to finally achieve something in. Puffy's Saga is just annoying and a mighty unpleasant gaming experience. From the moment I started playing it, I just wanted to stop. Sorry if it seems harsh but I was genuinely hoping I may have uncovered another hidden gem here, but quite the opposite turned out to be true.