As some of you may already be aware, my time as a gamer was spent on 'current' systems like everyone else right up until my beloved Sega went down as a hardware manufacturer. Indeed, since the untimely demise of their supremely awesome Dreamcast, I've been unable to muster much enthusiasm for any other current systems whether I've liked it or not. 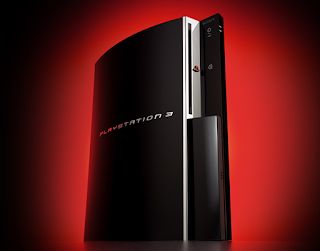 This isn't just because of Sega's absence, obviously - I'm not quite that sad (hopefully!) - I just seem to have gradually been losing interest in them. I think it was a coincidence as much as anything else. It was around that time in my view that the sheer scale of games started exceeding my simple 'short sharp fix' tastes, for one thing. Most of the kind of games released in the 21st century no longer seem to cater for gamers like me. It's not realistic to switch on a PS3 or Xbox 360, have a quick ten minute blast on something, then turn it off again - it would usually take that long to even get to the title screen on most games for these systems, and even then the games themselves usually require hours of attention at a time! Anyway, I'm rambling now - the truth is, I really can't explain why I lost interest in 'modern' gaming, but it is something I've been trying to rectify. I guess I just need that one special game to ensnare me and all the rest will then fall into place...

I figured the best way to do this was to scour the second-hand stores in my area for a few cheap games. After pushing aside the masses of EA Sports games on near enough every shelf I looked on, I did eventually find a few reasonable-looking examples, and for remarkably little cash too - with the exception of the first game featured (which was a gift), I paid a grand total of £31 for these games, so at least I wouldn't be too hard done by if I continued to feel mysteriously uninterested in games of this type. However, let's see how I got on with them:

As any regular visitors here will know, this was one of the first ever 'current' games I played, a momentous occasion which occurred at the Replay Games Expo back in 2010. I liked it a lot in the brief time I had access to it so I made it a point to seek out a copy for the PS3. Happily I soon received it in the form of a gift and... I still like it a lot! The aggressive, chaotic racing action is exciting and the cars control superbly - two of the most important ingredients for any racing game - but the designers also came dangerously close to ruining it all by giving the action a really stupid back-story (some sort of 'reality TV' bullcrap). In spite of this (which I tried to ignore), I was actually reminded of the stonking Burnout series in some ways, especially the style of the courses, but with the exception of being able to demolish buildings on top of opponents! There's lots of cars and courses to unlock though, and several different kinds of races to try and master. I did find that it got tough rather quickly but when it's this much fun it's worth persevering with.

Of my recent purchases, this was the first one I tried, partly because it's the only one of them I hadn't previously heard of - surprising since, as I soon discovered, it's by my beloved Sega! It also soon proved to be everything I expected of a modern game - it took twenty minutes of messing around before I could play it, then there was a long intro and several cut-scenes, there was a lengthy (though necessary) tutorial, and once I got to the actual game it quickly proved confusing and difficult for my old-fashioned brain! It's a third person futuristic military shooter which places you in command of a soldier in a complicated exoskeletal suit, and accordingly it makes use of every button on the controller! This was a bit much for someone used to two or three buttons, particularly considering the fast and somewhat chaotic nature of the gameplay (once it finally starts, of course). The presentation is top-notch though, and helps set the mood superbly. Just need to get the hang of the controls now!

I was actually turned on to this series by one of the guests my wife and I had staying with us over Christmas. He is a keen modern gamer and adores the Creed games so I decided I'd give it a chance. In typical Red Parsley fashion, however, I went for the first game which was also, helpfully, very cheap! After taking an age to get running, I finally got to play it and was disappointed to find another atmosphere-ruining back-story, this time featuring some guy in modern times being placed into some machine and forced to relive the memories of his ancestors. Despite the irritating 'fast-forwarding' of the memories now and then though, I greatly enjoyed life as an assassin, and exploring the various detailed locations is strangely addictive. Thanks to this, as well as the appealing medieval (kind of) setting, and much more intuitive controls than many similar games (although it didn't stop me from accidentally assassinating a few innocent passers-by here and there!), this is now probably my favourite PS3 game!

This was the cheapest game I bought - a mere £3! That should mean, in theory at least, that it was the crappest as well. That would probably be a harsh way to describe it but, to be honest, this has been the game I've enjoyed the least. The graphics aren't that great, looking more like a PS2 game to my less-than-experienced eyes, but the presentation is pretty good, featuring various intros and cut-scenes, as well as the option of creating your own character before playing. The game is set in/on a floating city called the Ark and once you do start playing, you have the option of either saving the Ark or escaping from it (which is basically playing as the 'good guys' or the 'bad guys'). I've only tried the former so far but Brink seems to be a fairly complex game for an FPS with multiple play modes, several different 'classes' of character, and lots of stuff to unlock. I'm not very good at it - I found it quite confusing and I died often - but it looks fairly interesting so it won't be retired just yet.

If any game here epitomises the trends of current-gen gaming it's this one, but it’s the first Call of Duty game I've played. I've heard so much about the series over the years though, that I was sure I knew what to expect. However, it turns out... I was wrong! Well, kind of. It is indeed a first-person shooter as I knew but it’s not quite the kind I thought it would be. I had imagined playing as one of many soldiers in various war scenarios, not running around city streets shooting policemen or escaping from prisons. The gameplay is also far more linear than I had assumed it would be but the stunning graphics, chaotic atmosphere, and amazing attention to detail, not to mention the opportunity to use crazy weapons like miniguns, still makes it a mighty entertaining experience which I mercifully found easier to play than the brain-warping Vanquish and Brink. Definitely one to put some more time into.

Verdict:
Yes, yes, I know, I'm rather late in getting around to this modern gaming lark - the PS4 (or whatever it's going to be called) is almost upon us now, after all, but I've often been a late starter with computers and consoles and it's never really done me any harm before. It's actually been quite useful as many games, as well as the systems themselves, are usually substantially cheaper by the time I get around to them! The purchase of my PS3 and my immediate thoughts on it, and indeed modern gaming generally, were relayed in a previous post as some of you may remember, but since I've now had the console for around seven months, perhaps it's time to summarise/update the situation.

During these months, it's been used nearly every day, but not for gaming. I'd say around 85% of its use has been for Netflix, about 10% for Blu Ray (the main reason I bought it, ironically), and only about 5% of the time for gaming. Obviously I've now spent a bit more time using it for games but many of the reasons I've disliked modern gaming endure. It takes lord knows how long to get most games up and running for one thing - Assassin's Creed took over an hour (and to think people used to complain about Speccy and C64 game loading times), and those constant bloody firmware 'updates' drive me up the wall! I also found that some of the games were little more than interactive movies, which is great for one play-through, but it doesn't really do much to encourage a return to the games after they're finished. This is regarding single-player modes though I suppose, and modern gaming is just as much about online multi-player gaming than playing by oneself (giggity).

This is an area I've never really explored on any system, and so late in the day is it for PS3 gaming I may no longer have the opportunity to do so with these games soon, so the one-player modes have to be great on their own. To that end, I have enjoyed them all to some extent but none of them has captivated me in the way that a new game system used to. I used to wake up in the morning and immediately leap in front of my console of choice, excitedly bleeping and blooping away. None of the PS3 games I've played have done this. I instead find myself stumbling past the PS3, maybe turning it on to watch Top Gear or something on Netflix, noticing the pile of games on the shelf at some point, thinking “maybe I’ll play a game later on”, but never anything as impulsive or immediate as the olden days.

The bottom line is - the games are all decent enough and most of them are amazing technical achievements, and all for roughly the same price as the far less advanced games I grew up with. I'm sure I’ll play them all thoroughly (I've even bought a couple of others since starting this feature), and the PS3 itself is clearly a very powerful and mighty impressive piece of kit, but the spark just isn't there for me, as much as I might want it to be. Maybe I'm just getting old...
Posted by RetroKingSimon at 20:14