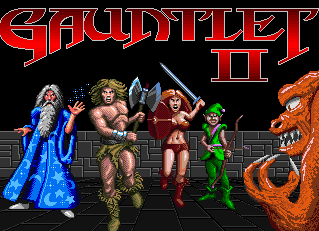 The immense success of Gauntlet pretty much guaranteed that a sequel would soon be on the way; the only question really was what direction Atari would take with it. It turned out they took the safer option - more of the same - but that's mighty welcome when the 'same' is as rip-snortingly spiffy as Gauntlet! There is again no back-story that I can determine so we are simply presented with a choice of the same four brave, fearsome, yet varied characters - Warrior, Valkyrie, Wizard, and Elf - and sent forth into a series of very mazey dungeons to vanquish as many terrifying foes as possible. Multiple players can choose the same character this time (duplicates are coloured differently) and there are again a hundred stages in total which appear in a random order from the sixth onwards, but for the most part they will just seem like more stages from the first game. 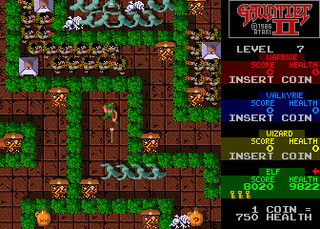 Generally, they are about the same size - approximately two screens by two - and they are filled with those pesky generators that spew forth endless Grunts, Ghosts, Demons, Sorcerers, and Lobbers, and there are a good few Deaths lurking around the mazes again too. There are only a couple of brand new enemies - firstly, the immensely annoying Acid Puddles which move erratically, cannot be killed, and only disappear after touching you, causing quite a bit of damage in the process, and secondly, the ghastly dragon. These are rare, solitary creatures, larger and much more powerful than standard filth with their fiery breath, and consequently they take a few more shots to put down too, but there is usually a nice reward for your effort such as a special potion of stack of gold. 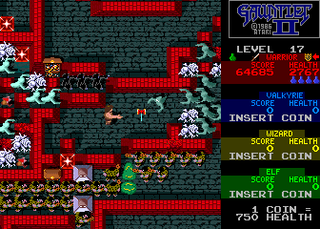 Actually, there kind of is another new enemy but it's only found in multi-player games. It's known as the 'It' monster and it does no harm except making whichever player it touches 'it'. The enemies are then drawn towards that player - unless they can touch another player who then becomes 'it' instead. It's not a bad idea and works fairly well when playing with friends, although fighting in such close-quarters pretty much means you'll all be inundated regardless of who's 'it' most of the time, but for solo-players, the biggest difference between this game and its predecessor are the power-ups. The normal magic potions and the attribute-boosting special potions return, as do the medallions that give temporary invisibility upon the wearer, but there are new ones too, in the form of amulets. 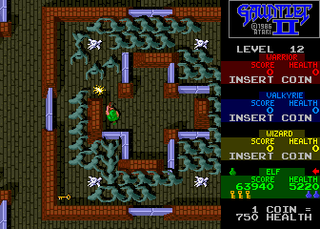 They include Invulnerability (shield, basically), Repulsiveness (makes the enemies run away from you), Super Shots (your next ten shots will savagely cut down as many enemies as lie in their path, except for pesky Deaths or Acid Puddles), Reflective shots (shots bounce off walls - works well with diagonals), and Transportability (lets you walk through walls... and pretty much anything else). The effect of all of these is of course temporary but they are encountered quite often and are usually (though not always) very handy. There are also some new types of food, several treasures in addition to the normal chests, including some that require keys to access (and don't always contain nice items either), and some irritating maze features like energy-sapping force fields, invisible walls, magic walls (that turn into stuff when shot), trap and stun tiles, and fake exits. 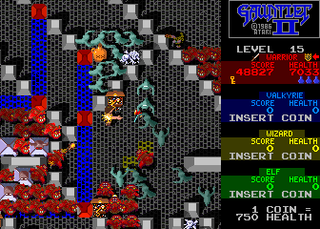 Mostly, though, this literally is little more than a new set of levels for Gauntlet. There are differences, sure, but nothing substantial. The graphics and sound are nigh-on identical, even to the extent that a few of the stages are merely re-coloured version of those from the first game (although there is a new title-screen tune). Of course, the up-side to all this ultra-familiarity is that if you're one of the many who liked the original Gauntlet, it's near enough impossible that you won't like this game either. It might have been nice to see Atari be brave enough to make bigger changes to their popular format but even if the new stages are very similar to before, they are at least new (mostly). I had the odd problem with them repeating (rather than being random), but it's difficult to not enjoy a good hack around some Gauntlet dungeons and it's just as hectically-superb here as always.