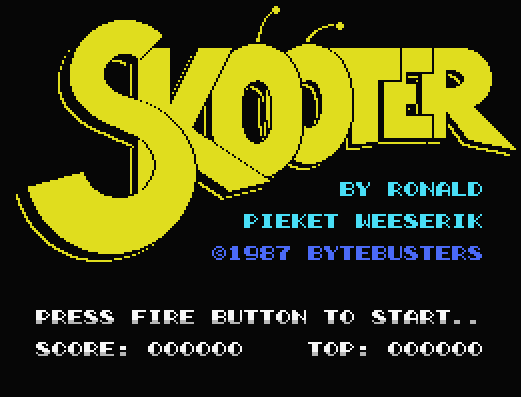 Since the MSX series wasn't very well known here in the UK, looking through its back catalogue now proves very interesting. Many well known game series' were born here but there were also some rather more obscure titles. Take Skooter, for example, which I'm pretty sure originates from Holland - a country where the MSX was popular. It's a single-screen puzzle game starring a highly appealing white robot of some sort, and his job is seemingly to collect all four items from each of the sixteen stages, or 'sheets', while avoiding the four brick-like robotic enemies that also inhabit them. They trundle around fairly slowly and predictably and they're more of an inconvenience really - the main challenge is usually getting to the items. The publisher actually describes it as a "game of jigsaw puzzle" (translated) and that's not very far at all from the truth.

Each stage, you see, is filled with many blocks of several different types. Some are moveable, others are fixed. Some can be removed, others only allow you pass over them in one direction (as indicated by the arrows that adorn them). This, added to some brain-twisting stage layouts, and you've soon got yourself a very challenging puzzler. Skooter, for I assume that's the name of our white friend, is able to move in the four basic directions at a fairly sedate (but consistent) pace and can remove/destroy the appropriate blocks with a press of the button, but that is the limit of his abilities. The only power-up is a heart that flutters around now and then and can prove quite elusive, but if you manage to grab it you can enjoy a short period of invincibility. Other than that, you'll have only your wits to carry you through the game.

Which probably won't really last all that long if I'm honest. Most of the stages will cause some head-scratching and require a good bit of experimentation but there are only sixteen of them, and once you solved them they're... well, solved. Indeed, a learned player could go through the whole game well within fifteen minutes. It might take a little longer to reach the maximum points tally though, which is down to not only collecting the items on each stage but doing so in the optimum order. This is because an increasing multiplier is used for each one. For example, the first item you collect only earns you the basic points but the second will give you double, the third triple, etc, and each item is worth a different amount. This only shores up the longevity a little but the game is still pretty darn good fun while it lasts!

Part of Skooter's appeal, for me at least, is down to the neat, almost monochromatic graphics which, typically of the MSX1, feature lots of blue and red. Skooter himself, with his ever-waggling antenna, is a highly appealing fellow, and there is a really nice tune throughout as well - the presentation is great generally. There are even some proverbs/facts/sayings in between stages (and in English too)! The game could really use a 'restart stage' option, though - there were a few times I got stuck and had to reset the machine and start from scratch. Bah! It's not a gameplay-killer though, and I've enjoyed Skooter's adventure since I discovered it. If the number of stages was, say, double the number it is, it would perhaps even be one of my favourite MSX games, but as it stands it's still a perfectly pleasant oddity in its software library.

Gameplay Video: Here's a look at the first few 'sheets' of Skooter. And yes, I did mess up the fifth one :P (I know how to finish it really but I figured I'd leave it in so as to not show the whole game)

Special Note: There's now a decent remake of Skooter for PC too - check it out here...