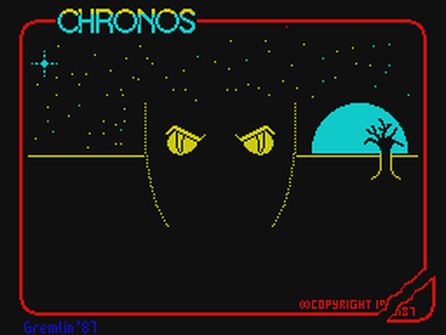 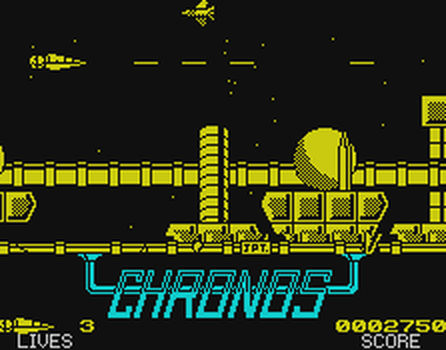 Even in its day, Chronos was one of the most basic shoot 'em ups seen for years. It's a horizontally scrolling affair spread over six fairly long levels. It features no power-ups, very basic and repetitive enemies, and little else. It should be complete crap, but for reasons I find myself completely unable to explain, it's not! The first level features two kinds of enemies. The first are flying aircraft things which fly in a straight line and explode, either when you shoot them or when they hit part of the scenery. The second kind is a simple sphere which does much the same, but doesn't move as quickly. The level is over when you reach the 'Chronos Zone End' marker, at which point the graphics change colour and the next level begins, each bringing with it a new kind of enemy. Level two, for instance, introduces the 'tumbling' squares which are harder to avoid or shoot due to their unpredictable flight path and they often seem to lie in wait, popping up at the most inconvenient moments! All the enemies appear randomly as well, and are often found in rather strange parts of the landscape, but the levels themselves are quite interesting. There is an abundance of scenery for one thing, some of it lining the top and bottom of the screen, some simply floating about the place, and much of it pretty sizeable and arranged in such a way that you're rarely able to fly along in a straight line. At a few points it even offers two different routes, but one generally ends in a dead-end! Amusingly, some parts of the scenery also display various non-game-related messages, presumably due to the programmer larking around while writing it. This doesn't affect the gameplay of course, but something that does are the obstacles you'll encounter. The first are segmented barriers which can be destroyed a section at a time by shooting them, and they are pretty numerous too, appearing in all sorts of locations. 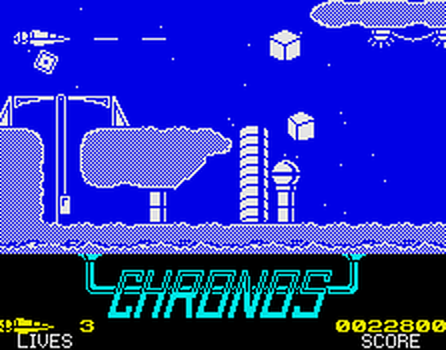 Sometimes these are only a couple of sections high inside a tunnel or small gap in the scenery and other times they appear screen high (on the rare occasion that's possible). They are replaced by honeycomb-like barriers in later levels which effectively do the same thing, but both types are good fun to blast through. There are also energy barriers which span the distance between the top and bottom of the scenery. These are taken out by shooting them at the top or bottom which disables the beam. A more aggressive feature, which can be found increasingly often as the game wears on, are the gun emplacements. They are normally found near the bottom of the screen, usually several at once, and shoot directly upwards. Just about the only other feature of note is the bonus letters which appear every now and then. They gradually spell out B-O-N-U-S (what else) and give you extra points. 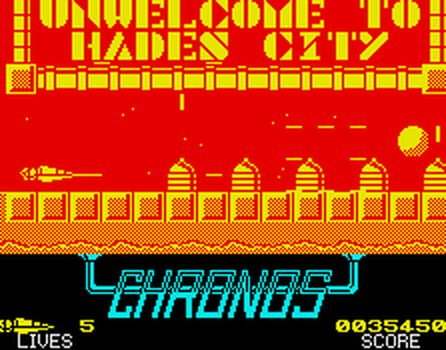 There really isn't much more to the game that that. Chronos is a very basic shooter to say the least, but it unquestionably has a certain something. But what is the hook? One of the most appealing things about it is its appearance. Each level is presented in a monochrome style - one colour for the space background, which is littered with stars moving at different speeds, and the other colour for everything else. The first level has a twinkly black background, like most other levels, but with yellow sprites and scenery, for instance. While technically far from the pinnacle of even the Spectrum's humble abilities, Chronos's graphics are very neat and suit the game well. The only bad point here is the somewhat jerky scrolling. Like many Speccy games, the sound is far less impressive, however. The only tune in the game is present on the title screen (but it's a good one) and during play there are all of three sound effects - your ship's shooting noise, explosions, and when you collect the bonus letters. 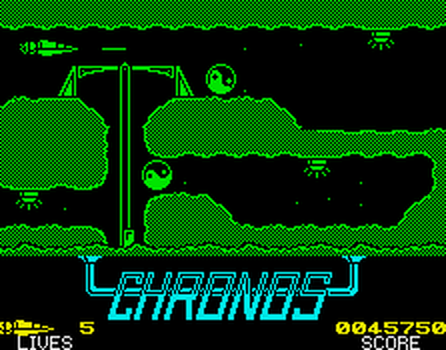 The game itself is just as simple as its aesthetics too. Chronos should be a bit of a stinker really, but for some reason it's not. I'm not sure why this is but I've always enjoyed playing it, from right back in 1987 when I first got it up until this very day. I think this is at least partly down to the imaginative scenery. Shooting the aliens almost takes a back-seat at times to navigating your way around the screen, down tunnels, and taking out or avoiding obstructions - the game always keeps you on your toes. The six levels won't challenge you forever and I've finished this game several times, but it's a good game to return to due to its high-score potential. There are a fair few enemies on the screen at any time and you can't cover the entire screen the whole time. Therefore, if you can't destroy all of them, the possibility to improve your score will always exist, as there are always points missed. 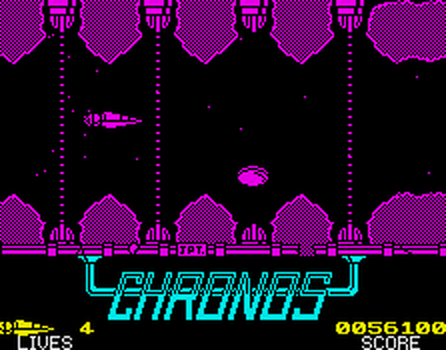 As you might have noticed, I have long had much affection for this splendid game, but Chronos is very much a budget game, and you can see that from the moment you see it in action for the first time. It doesn't have the 'presence' of a full-price title, but the truth is I've spent far more time playing it than I have near enough any other such game on the Speccy, full-price or otherwise. But at the same time, it might be slightly unfair to give this game a huge score, due mainly to the existence of far more polished Spectrum shooters such as R-Type, Side Arms, Salamander, and Flying Shark (which are all, probably not coincidentally, arcade conversions). The mere mention of those titanic games should see this meagre effort immediately fade into obscurity, but for some reason I can't stop myself from liking it, year after year. It may be a bit cheap and cheerful, but Chronos is also a highly enjoyable little game.


Special note: such is the love for Chronos, there's a decent PC remake available. Download it from the excellent World of Spectrum remakes page, here.

Gameplay Video: Here's a look at the first few stages of Chronos as blaster through by me!