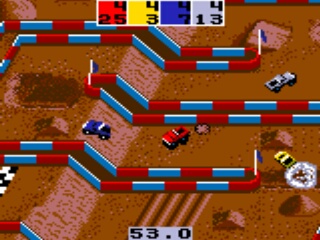 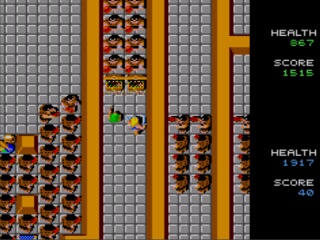 As a self-confessed Gauntlet addict, it took me a concerning amount of time to finally get around to playing this version of the classic but I'm glad I finally did! Some say it's a game that was never meant for the solo player and is no fun when played alone. I don't agree, I've always loved playing it, by myself or not. There can be little doubt, however, that it's much more fun with a friend in tow, even if the age-old problem of deciding who gets to choose their favourite character never seems to go away! This MS version of the famous Atari coin-op was a revelation when it came out and was surely the best version of all the ones to be found outside the arcade. The little MS can handle the hordes of simultaneous on-screen enemies surprisingly well and as a game it still holds up fantastically well today. 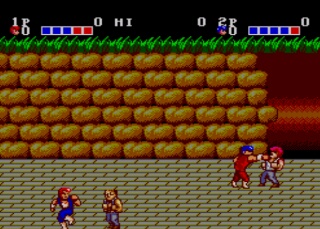 The arcade version of this one was much loved, but the home conversions have always been a real opinion-divider! I can still remember the arguments about which ones were good and which weren't! This MS version was renowned for its horrifying levels of sprite-flicker, and indeed it is among the worst examples of this graphical glitch on the system (so much so that even getting a usable screenshot is a challenge!), but it was still one of the most enjoyable two-player games available for the MS and remains so today. In fact, my good friend, Luke, and I still play this one regularly which says a lot about its splendour. Good quality scrolling-fighting games are few and far between, but ones this slick and playable are to be treasured! 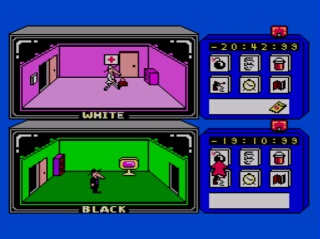 As much fun as a two-player co-operative game is, I think most people will agree that outwitting (no to mention beating the crap out of) a friend is even more fun! And what better way to do it than the fantastic MS version of this classic? Playing the part of the opposing spies from the pages of Mad Magazine, you're supposed to be rushing around the rooms looking for the items you need to escape, but most players end of spending most of their time setting booby-traps to catch their friend out, then cackling as they get fried/blown-up! It's a simple but highly addictive premise, and the random room and item placement, as well as the fairly extensive later stages, mean you'll never get bored of doing it! 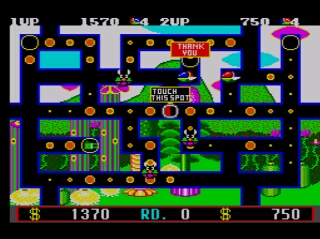 Unusual choice? Maybe, but Luke and I have spent so much time playing this under-appreciated gem I just had to put it in the number one spot! I'll be the first one to admit, a Pac-Man-inspired collect-the-dots game wouldn't have been the most obvious use of the Fantasy Zone name, but it works really well. The graphics are slightly less eye-melting than the other Fantasy Zone games but the music and sound effects are superb and there's a lot of game here for your money. Collect the coins, use them to buy weapons to shoot the enemies and get further in the game. Yes it's a tough slog - some later enemies move ridiculously fast - but plentiful supplies of weapons derived from the earlier Fantasy Zone games help prolong the enjoyment, and enjoyable it is too! Beyond all that though, it can get so testing on my own that I need some help! Simple, addictive, and awesome fun.
Posted by RetroKingSimon at 21:24