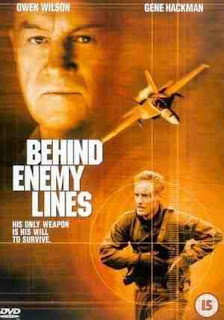 After an exhilarating, edge-of-the-seat, trying-to-avoid-surface-to-air missiles sequence, their F/A-18E/F Super Hornet (apparently) fighter is finally downed over occupied territory. Now stranded... well, behind enemy lines, it's up to Burnett to stay alive and evade capture by the enemy long enough to make it to safety. Back on the carrier, a frustrated Admiral Reigart (Hackman) tries to find a way around the red tape preventing him from sending a rescue party after Burnett, who is being relentlessly persued by pretty much the whole Bosnian-Serb army, including a very dedicated and skilled sniper (Mashkov). Having to remain undetected in both rural and urban areas, Burnett, for the first time in his career, has to remember and make use of his military training, as well as hope for a bit of luck!

Granted, there's not a hugely intricate, interweaving plot, but this is a solid and exciting action film, albeit fairly typical Hollywood fare. Gene Hackman is in familiar territory but does well with his limited screen time. Owen Wilson, however, proves surprisingly proficient in his portrayal of the initially panic-stricken, deer-in-the-headlights, Burnett, clearly out of his comfort zone. Also very noteworthy is Vladimir Mashkov as chilling Serb sniper, Sasha, hell-bent on taking his target out. Despite being filmed in Slovakia and featuring no Serb actors in the cast (none wanted anything to do with the production, apparently), John Moore does a good job of recreating the war-torn landscape of civil-war era Bosnia, complete with armies, Bosniak Guerillas, towns in ruins, and roadside wreckage, each separated by stretches of desolate countryside. Also keenly felt is the sense of isolation felt by Burnett as he sporadically manages to make contact with Reigart inbetween dodging Bosnian-Serb bullets and grenades, and hiding under corpses.

Overall, Behind Enemy Lines isn't perfect - it's very much a Hollywood film, complete with a suitably over-the-top, unrealistic ending (although, surprisingly, no love interest!), but it's more about the journey than the destination, right? And it's a solidly entertaining journey throughout.