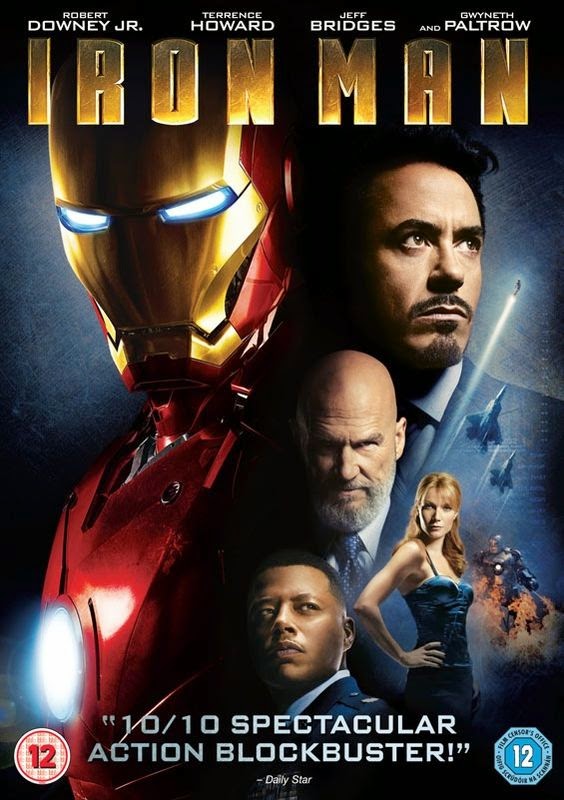 It tells the story of how millionaire playboy and genius engineer, Tony Stark (Downey Jr.), suffers a fatal heart wound on a business trip to Afghanistan, during an attack by kidnappers who want him to build super-weapons for them. In the case of this film, the antagonists in question are, predictably enough, Middle-Eastern terrorists. Instead of building the 'Jericho' missile as ordered, however, he constructs, not only a device to keep himself alive, but also a powerful suit of armour which he uses to blast his way to freedom. As you might imagine, after three months in captivity, in a cave, in fear of his life, Tony's ordeal changes him. When he finally gets back home, he immediately declares that the company he inherited from his father, Stark Industries, a major weapons manufacturer and military contractor, will no longer create death-dealing devices.

Naturally, his father's old partner, Obadiah Stane (Bridges), who effectively runs the company, is strongly opposed to this. Instead, Stark devotes his time to building an improved version of his suit while Stane plots to wrest control of the company from him which inevitably results in a confrontation between the two. The story is pretty well-known, and somewhat predictable even to those who don't read comic-books, but that certainly doesn't detract from the entertainment factor. In the wrong hands, this could be a fairly mundane movie, but luckily, with masterful helm-control from actor-turned-director, Favreau (Swingers), and top-notch casting, it's anything but mundane. Whoever it was that decided to cast Robert Downey Jr as Stark was almost as much of a genuis as Stark himself!

They were arguably even bigger gamblers than Marvel too, given his somewhat 'colourful' past, but it was, however, a masterstroke. He's a revelation, and elevates this film all by himself. It's almost as if the character was made specially for him. His (apparent) natural charisma and charm are perfect for the role, and suit the confident, outgoing, extroverted, Stark to a tee, as does the decor of his updated, futuristic Malibu mansion - his workshop is full of super-advanced technology and watching him interact with it all is really enjoyable, especially his banter with his computer and robotic helpers! The rest of the casting was never going to top this brilliance but it is also of a high standard.

Stark's loyal assistant for example, Miss Pepper Potts, is nicely played by Paltrow, Jeff Bridges is almost unrecognisable as the imposing Obadiah Stane, and Terrence Howard is stern, but likeable as his friend and military liaison, Rhodey. Overall, it's pretty much as good as it could've been. Does it best the first Spider-Man? Possibly not (it's close though), but Iron Man is a bit more of an unknown quantity. There's something for everyone here really - political and biblical references for those looking for a bit of depth, action and witty dialogue for those wanting to sit back with some popcorn and turn off their brain on a Friday night. This has to rank among the best comic-book adaptions to date and you'll almost certainly enjoy every minute. Oh, and don't turn it off when the credits start rolling! ;)