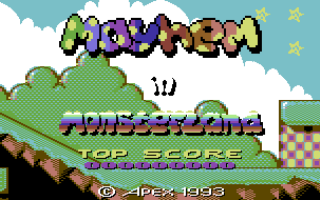 As loyal as I was to my delightful Speccy, by the time the nineties had arrived I had moved on to Sega's glorious Mega Power. Of course, even in the years prior to this, Sir Clive's finest was my main system of choice. These factors combined meant that by the time Mayhem in Monsterland had been released I scarcely even heard about it nevermind played it. Indeed, so late was the hour of its arrival that Apex's creation was played by few gamers. It's arguably a game that has become more famous as time has gone on, but why? Platform games were everywhere in the late 80's and early 90's so what makes this one so special? The very fact that I don't know means I think it's time I finally found out. 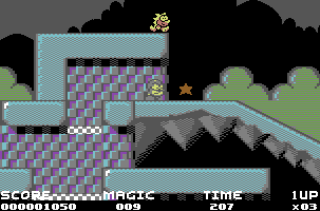 Platform is very much the category this game falls into too and it's one starring a small yellow dinosaur-like creature called Mayhem (oddly enough). He lives in a miserable place called Monsterland and he doesn't like living there. However, he discovers that it was once a bright and cheerful place until his dinosaur friend, Theo Saurus, messed it all up. Theo, you see, is a trainee magician who mistakenly stripped Monsterland of its happiness and now lives in an underground cave to evade the angry monsters who dwell above. Upon discovering this, Mayhem vows to restore the happiness to Monsterland. To do this he must travel through five large areas - Jellyland, Pipeland, Spottyland, Cherryland, and Rockland - collecting all the magic dust and magic stars he can. 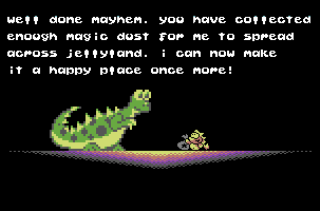 You can move through each of the five lands that comprise the game at will. You start in the middle and can move left or right at whatever speed you like. Each one is divided into two parts - sad and happy - which means that they will initially be drab and grey. Your first job, therefore, is to collect a set amount of magic dust which is left behind by some of the monsters when they are defeated. Once you've got enough you'll need to find Theo so he can sprinkle the dust through the land, returning it to its much more colourful happy state. Then you'll need to go through the land again to collect a set quota of magic stars which are again left behind by some enemies or more commonly found floating around the newly-bright and cheerful landscape. Once this is done, the land is complete! 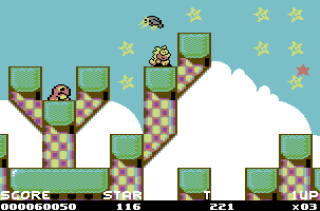 Mayhem is quite agile and can move around the multi-tiered stages quickly. He has quite an impressive jumping ability for one with such short legs too and is able to sustain one hit per life without dying. His initial means of defeating the various monsters is by jumping on them, Mario-style. Some later enemies require more than one jump each but even the larger ones can be put down by this method. He can also perform a high-speed charge at the monsters once he's collected the relevant power-up marked by a lightning bolt. Other stuff to collect includes a score multiplier (in the form of a rabbit for some reason), a shield, and a time-freezer, all of which last for a short while, as well as blue hearts to restore one hit, extra lives, and extra continues. If you return to a previously-visited part of the screen the enemies will have returned, but any power-up they may have carried will not be duplicated. 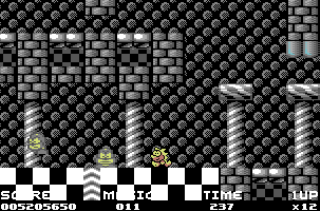 Whilst everything no doubt sounds reasonable enough so far, it's could also be said about a great many platformers of the day, so you may still be wondering what's so special about this quest headed by our primeval friend. I think this could be best answered by saying this: if Mayhem in Monsterland was released on the Master System or Amiga, it would be among either system's finest examples of the genre, so the fact that it's running on a Commodore 64 is pretty darn amazing! Although the colours used throughout are clearly from the C64's distinctive palette, everything else is beyond what I thought any of the 8-bit micros was capable of. 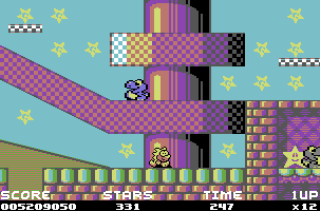 The only thing I'm not especially keen on is the music. There's numerous tunes, including different ones for 'happy' and 'sad' states in each stage. They're not as bouncy and jolly as I would expect for this kind of game, not even the 'happy' ones, but the sound effects are appealing. The music is a bit repetitive too (although the title screen tune is nice) but the fact that there even is music and sound effects is to be applauded! It's something that us console owners in the early 90's took for granted but the 8-bit computers generally had much more limited sound capabilities so it's both rare and welcome here! Everything else about the game is super-slick but the first thing you'll probably notice are the fancy graphics. 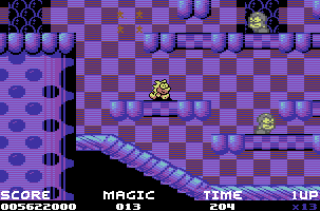 I'm not generally a fan of the C64's usual graphical style but this game is on another level entirely! The title screen features scrolling game backgrounds with sparkly wording and each stage is preceded by an intro screen, and when you actually start the game things get even better. Mayhem himself is a jolly-looking fellow despite his plight but he's about the only constant. When a stage turns from 'sad' to 'happy' the distant lightning disappears, the dark foreground colours become more vibrant, the backgrounds are a million times more cheerful, even the monsters change, turning from obscure, malevolent-looking creatures to jolly, cartoony characters (which still hurt Mayhem of course!). The detail on them is impressive too and they are all superbly animated. 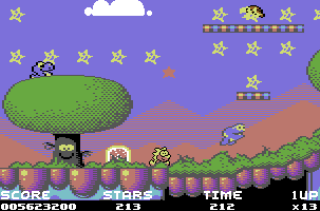 The backgrounds could be a little more varied but the speed the games scrolls them at when Mayhem is charging around the place is amazing. There's even some parallax for heaven's sake! I've never been a C64 fanboy either, so there's definitely no danger of me showering this game with praise simply down to the "wow, I can't believe my little C64 is doing this!" factor - it really is that good, and not just technically. I've never played a game as fluid or intuitive as this on an 8-bit computer, not even my beloved Speccy. The going can be tough but the stages are long and very well designed and moving Mayhem around them is tremendous fun and also proves to be very addictive! I did have to re-learn pushing 'up' to jump though! It's also a great game for high-scores as you get bonuses at the end for collecting more stars than necessary as well as for any time remaining. 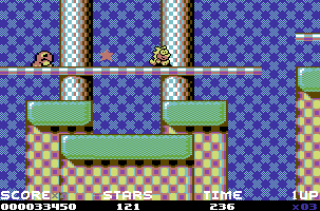 This was a game that appeared very late in the C64's life and was only just in time to feature in Commodore Format magazine's final issue where they famously awarded it with a score of 100%. Is a perfect game? No, of course not, there's no such thing as far as I'm concerned, but it certainly is a remarkable game which, despite the hype, has managed to exceed my expectations. I'm no C64 wizard and have only a vague idea of what the system is capable of, but even I know that this game achieves things on it that hardened Commodore fanboys must've thought impossible. That if nothing else would make it an essential title to own for fans of the system but, somehow, Apex have also managed to craft an exquisitely playable game which is now without doubt my favourite C64 game. I haven't played too many yet admittedly, but I can say with the utmost confidence that I don't think I'll ever play a better one.