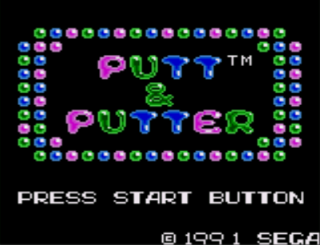 Considering how little variety there is in the actual sport, it's surprising how many different kinds of golf games there are. As regular readers here will know, my favourite kind are the cartoony Japanese ones that started appearing around the early 90's, partly because they can be played at a non-sleep inducing pace, but also because their creators are generally much more inventive with their design. Another kind of golf game that could tick both of those boxes is the kind based on mini, or 'crazy' golf. In fact, given the nature of the game, it would be fairly easy to make these games among the most creative of all sports games. The first one I ever played was this little-known title which was one of the few games I had for my Game Gear. I remember getting a lot enjoyment out of it back then but how kind has time been to it in the fifteen years or so since I last played it? 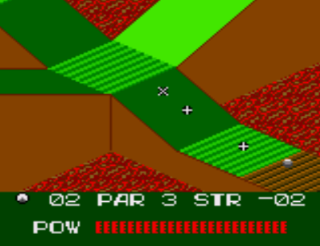 It's a fairly simple game presentation-wise with basic title and options screens. Gameplay consists of two courses of eighteen holes each - a Beginner course and a Master course. As you might expect, the holes become increasingly complex and strewn with obstacles and traps as you advance through them but the object always remains to get the ball down the hole in as few shots as possible. You start the game with five balls and each hole has a par value. If you successfully putt it in fewer shots than the par, you'll get an extra ball; if you use too many shots, you'll lose a ball. Each hole starts at the same point and you get to position the ball anywhere within the starting area (a small square). You can then set the position of the camera which also gives you a good opportunity to have a look at the hole (giggity) before teeing off with the desired amount of power selected from the simple power-gauge. 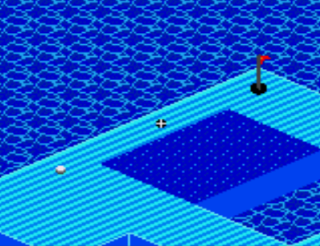 The holes come in all sorts of shapes and sizes and are home to various features like slopes, pinball-style bumpers, slow-down areas, pools of water, etc. Most of the edges are like walls and will deflect the ball which means many of your shots can be rebounded all over the place, especially if you use too much power! The game alternates between two different coloured playing surfaces (green and blue) and two backgrounds (water and what looks like lava) which means it doesn't have a particularly varied look and even more repetitive is the tune that plays throughout which is pleasant enough to begin with but soon grates. Like most simple games though, it's just as playable as it always was. The way the holes are designed means some might take you one or two shots one day and ten shots the next, so it can be pretty frustrating on some occasions. The interface for aiming shots could be more accurate too, but it's a game that suits the little Game Gear well and it can be a decent challenge. Great fun and mighty annoying in equal measure!