As great as the various incarnations of Star Trek are, everyone knows the superior show to watch from beginning to end is Babylon 5. This is of course mainly down to the amazingly intricate and enthralling story, superbly developed characters, and the ongoing arc that progressed them all, but it certainly didn't hurt that it had superb alien make-up and a realistic portrayal of the future of mankind, all the corrupt, war-starting lot of it! Something else it had over Star Trek is decent-looking spaceships and here are the best ones in my view:
5 - Earthforce Starfury
The main attack fighter of the Earthforce fleet, this little one-man craft is a superbly versatile thing. What it lacks in raw firepower it more than makes up for with its immense maneuverability. Each of the four 'wings' has a thruster on the front and back and any combination of these can be fired at any time making the Starfury capable of making pinpoint maneuvers and can turn on the spot, even performing one-eighty degree turns while flying in a straight line. It is perhaps for this reason that NASA actually expressed an interest in making it for real. It's not very tough but it looks nice and I get the impression it would be riot to fly one! 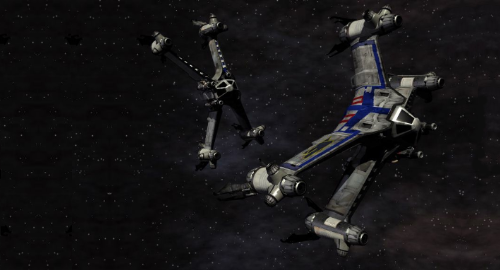 4 - White Star
There will be more on this one in the next post but whatever other qualities it may or may not possess, no one can dispute its distinctive looks which makes it seem as though the whole thing was cast from a single mold in its complete form. At first believed to be a one-off warship, it later turned out that, splendidly, there was an entire fleet of these things which combine Minbari and Vorlon technology to give it not only advanced offensive and defensive capabilities, but also a striking appearance which left no doubts as to its strength and agility. 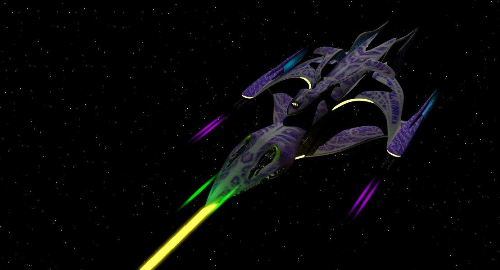 3 - EarthForce Destroyer
Or more specifically, the Omega-class destroyer shown below which, at the time of the show, was Earthforce's largest and most powerful warship. One reason I like this ship so much it that, unlike Star Trek, it's actually a realistic estimation of the kind of ship we could be using in our early years of interstellar travel. It's a huge, lumbering hulk of a ship with much of its mass taken up by the rotating centre section, used to create artificial gravity for the crew. As you might imagine, it's not particularly maneuverable, but few ships look more imposing emerging from hyperspace than one of these, especially with its immense red laser batteries discharging. Cheer on Earth with their technologically-inferior-but-still-really-mean ships! 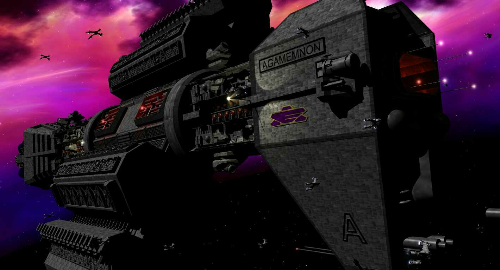 2 - Narn Heavy Cruiser
Poor old Narn, who couldn't feel for them during their war with the Centauri? One of the consequences of their conquering in that conflict was the loss of almost all of these G'Quan-class heavy cruisers, and mighty fine they are too. They are big, powerful ships clearly designed to look as though they have one purpose - to shoot up stuff! It almost seems as though the Narn designed the huge Heavy X-ray Cannons first, then built a pointy-looking ship around them and gave it scary warpaint! One of the most powerful non-First One ships around. 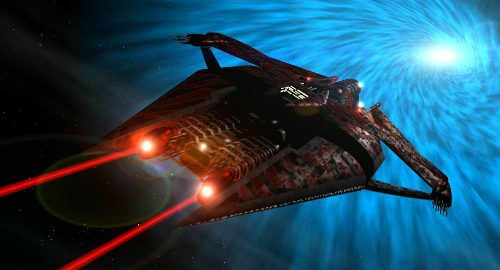 1 - Shadow Capital Ship
Eeeek! Even if you never got to see one of these things in action, they'd still look ultra-scary! Okay, I know it's a bit of a cheat - the Shadows had a good few million years to perfect their design after all - but what a crazy ship this is! All Shadow vessels are comprised of bio-organic materials and are in effect living creatures themselves but they also require a sentient, humanoid pilot who is integrated into the ship and operates in unison with it, and a ship so equipped is a devastating thing to behold. No other ship strikes fear into the heart like this one does. The appearance of one equals one thing - panic, hide, run! 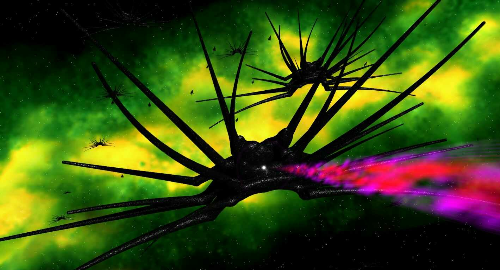 So, these are in my opinion the best or most formidable-looking ships from the B5 universe, or at least the ones that have had a decent number of appearances in the show. Coming soon in a different post, however, will be the five deadliest. Ooooohhh!
Posted by RetroKingSimon at 15:55