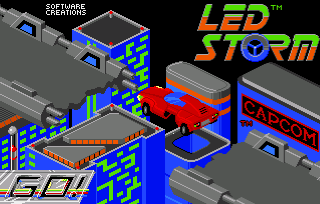 Adverts take up just as many pages as actual content in most magazines these days and they're mostly complete crap but back in the 80's and 90's when I used to read so many games mags, they often featured superb and memorable artwork which lingered in my mind for years. One of these adverts was for L.E.D. Storm which showed a distinctive, futuristic-looking orange car leaping from a broken section of road. My only experience of the actual game was somewhat less memorable and it today appears to be a game most keenly remembered for its music (do a YouTube search on its title to see what I mean!). However, a good few years have passed, so in the best traditions of Red Parsley, it's time to take another look at it, and this time the mighty Amiga version where the car actually is orange! 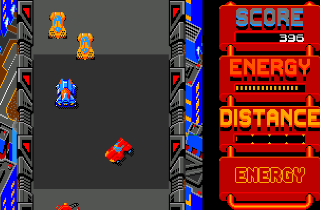 Unsurprisingly there's little in the way of story here with the action firmly taking place on the overhead-viewed courses. There's nine of them in all, located in various parts of the futuristic game world, and they're not actual circuits but rather stretches of road leading from one location to the next. Surprisingly for a racing game of this type, there's little combat and no weapons here. The object is simply to reach the end of each stage and the only things that might prevent this are losing your lives by crashing your car, or by running out of fuel. Of course, there's more to it than that. The action is viewed from a zoomed-in perspective and you don't get the roads to yourself either. Each is riddled with other kinds of motorists as well as various traps and hazards too. 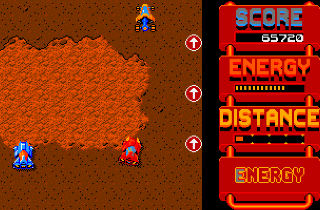 Among the more notable fellow road-users are 'Manic Frogs' which grab hold of your car and drag it down, and another car just like yours except it's blue. This is your main opponent and its driver is aggressive! Your car's fuel is represented by its energy-meter which gradually depletes as you race. It can be topped up by collecting the jerry cans that litter the road and you'll also come across collectible icons now and then which will give you more fuel, bonus points, or a temporary shield. The tracks also include some less-helpful features like car-destroying obstacles, oil slicks, falling rocks, split tracks, and broken sections of road which must be jumped by aiming for one of the ramps which are usually nearby. Your car can also jump under its own power which can be helpful for avoiding hazards or for landing on top of other racers! 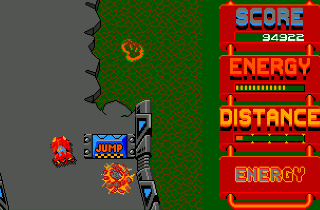 The stages are set over a diverse range of terrains as you can probably guess from their names - Capital, Netwood Forest, Coral Sea, Big Cave Tunnel, Ruins Desert, Thunder Road, Million Valley, Marine Snow Pipeway, Skycity - but considering they're supposed to be "the nastiest race courses devised by man", they're not especially great! This is partly down to the fact that they scroll strictly from top to bottom which means, aside from some slight diagonals now and then, the tracks aren't very varied or interesting in their layout. This isn't helped by the rather average graphics. It's not really an ugly game, just a startlingly bland one. The track changes occasionally and the background changes every stage but none of them are especially flashy or inspiring. The sprites, too, aren't very interesting and even the orange car itself that so enticed me before looks a bit weird. 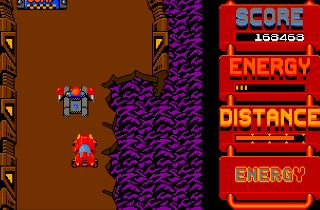 But what about that famous audio? Well, the sound effects barely exist but the guitar-based music, while hardly the amazing, catchy compositions I was expecting, aren't bad at all. The best tune is the one found on the title screen but in my view the other music isn't worth playing the game just to hear, and sadly this isn't really a game that's hugely enjoyable to play for any other reason either. It's quite addictive, admittedly, but the perspective means you rarely get much warning of any impending hazard or jump, and even if you did, it's just the same old stuff from stage to stage for the most part. The depletion/replenishment of your car's energy-meter seems a bit random too. All this conspires to make L.E.D. Storm (Lazer-Enhanced Destruction - a strange acronym since there's no 'lazers' in the game!) a rather dull affair which, memorable advert or not, I did not enjoy playing very much.