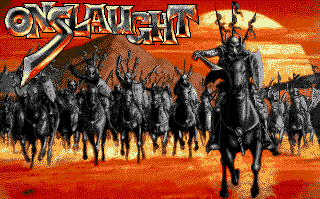 The years of the Atari ST and its age-old rival the Commodore Amiga were conflicting ones for me. For the first half of their tenure, my main system of choice was my trusty Speccy. As great as Sir Clive's marvel was, it couldn't hold a candle to 16-bit machines, technically. For the second half of their tenure, I was the proud owner of the all-powerful MegaDrive console where I found myself in the opposite situation. Whichever side of the fence I found myself on though, I always kept an interested eye on releases for the ST and Amiga and one that always intrigued me was Onslaught. It was available on both machines and looked suitably impressive for both. It wasn't long, however, until I learnt a valuable lesson - appearances can be deceptive...

Set a good few hundreds of years ago, Onslaught is the tale of many warring kingdoms. At the start of the game you'll see a map screen consisting of a 16x16 grid of tiny squares which presumably represents a sizeable portion of the world of Gangore. Each red square is a kingdom and each red dot with a light ring around it is a temple. You start the game as a random warrior, all known as 'Fanatics', and at a random point on the map, although usually towards the edge somewhere. From here you can select any kingdom or temple within one grid square of your position. The former are multi-tiered, side-scrolling platform/combat sections which come in three parts. First you have to battle your way from left to right until the end where the enemy's banner is located; then it's on to a 'siege' section which is more or less the same except the enemy banner is at the top of a castle; and then it's on to a 'mind duel' which are rather stranger. 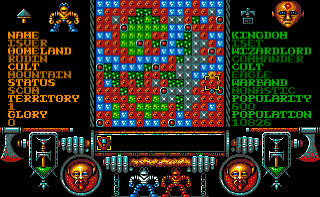 These are basically boss fights but feature a floating, four-armed head! You control a hand that can move around the edge of the screen and fire magic stars, and this you must do until the strange creature is no more. Victory means you've won the territory and then it's on to the next. The temple stages are the same as mind duels and there are also plagues, crusades, and rebellions to contend with. These occur at random intervals and make the going even tougher, particularly the latter which costs you a previously won territory. During the battle sections, it's also important not to let too many enemies past you unscathed as if enough of them make it, they can grab your banner too! 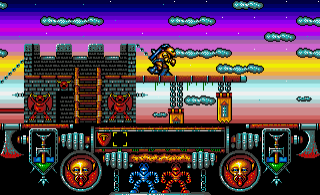 Each of the kingdoms on the map has a status panel type thing that can be viewed prior to attacking them. This includes the popularity of the warlord who's currently in charge (which affects the strength of the enemies), population (number of enemies), and warband (types of enemies). The last one is of particular note as the enemies can take several forms, some more dangerous than others. Footmen attack with conventional medieval style weapons, wizards cast spells, and spearmen are fairly self-explanatory. There are also soldiers with cannons and other more powerful weapons aimed in your direction and landmines dotted around which should be avoided at all costs. The last kind of enemy is the most annoying. 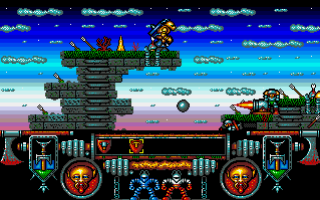 They are the riders. Their vehicles range from boars, horses, or even magic carpets, and they travel across the screen in either direction. If your warrior is touched by any enemy it will push him backwards a little but this effect is considerably increased by the riders. The armaments used by your 'fanatic' can sometimes lesson the likelihood of this happening though. You'll start the game with a mace. This is obviously very short-range and not terribly powerful so it's fortunate that some defeated enemies will leave behind shield icons. These are new weapons which include crossbows, bombs, and homing shots. They all have a limited lifespan but are invaluable for making progress, as are the magic scrolls which can be collected from the same source which give you abilities ranging from screen-clearing smart-bombs to freezing the enemies. 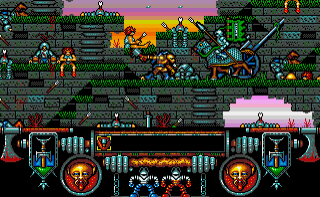 The first thing you'll notice when you load Onslaught is the splendid piece of music and the impressive loading screen, above. These both make a great first impression and the in-game graphics and music, while varying little, are still of a high standard. The battle stages are quite cluttered and the colours a bit garish but the detail and animation of the sprites is great. Overall it's very atmospheric though, especially the fantastic music. However, as is typical of Amiga games the music comes at the cost of any sound effects, although you can turn the music off on the options screen if desired. Something else you can do here is raise the difficulty but I definitely wouldn't recommend doing that - if taking over a load of kingdoms single-handedly sounds tough, that's because it is! 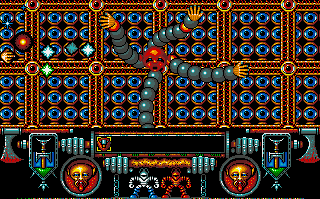 Your warrior may have a reasonable amount of energy but it'll soon get worn down - most of the battle stages are fairly short but are so full of enemies that most of them will take a while to get through. The enemies re-spawn too and they really do throw everything at you including arrows, meat-cleavers, cannonballs, and land-mines to name a few (although it's not surprising I suppose since I'm pretty sure you play the part of the bad guy, attacking and ransacking innocent villages!). Some stages can be so overwhelming that it's difficult to even make any headway, particularly stages populated by riders. This kind of thing just compounds the already highly challenging nature of the gameplay and sadly makes playing Onslaught a very frustrating experience. All this and you get just the one life and no continues! 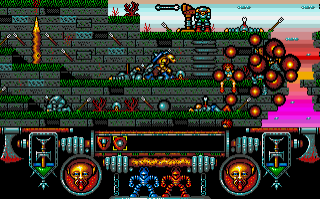 The screenshots and description probably make Onslaught seem like a really interesting game, I'll certainly agree there. There's a lot to do and the mixture of combat and strategy seems like it's been well thought through, so I really wanted to like it, but after giving it numerous chances to impress me, the result is always the same. Its design seems very disorganised and chaotic but most of the problems are caused by the very high difficulty. I don't know how insanely gifted some of you might be but I often don't even finish the first stage nevermind rule over the whole land of Gangore! It is quite addictive but I can't imagine I'll make it too far into the game - I certainly haven't yet! It's hard to know what to make of it really. There's lots of great ideas and potential but sadly it's just been executed in a frustratingly unsatisfactory and... well, frustrating way. Time for a remake?