As an Englishman, I'm quite unusual in one way. Actually, I suspect I'm quite unusual in several ways but the one I'm presently thinking of is my keenness on America's stupidly-named-but-nonetheless-entertaining sport of 'Football', and since the SuperBowl is once again upon us, I find myself reminded of how I became interested in the sport to start with, and that was - video games! In all my years of gaming I've played just about every kind of game there is, but if there's one genre I just couldn't get into, it's sports games. I like many sports in real life but video games based on them just never seem to do it for me. Except for one - American Football! Actually, it's two as I like some golf games too, but in the case of the former it was actually playing games based on America's favourite sport that not only taught me the rules but also intrigued me enough to seek out the real sport as well which has now provided as many years of entertainment as the games themselves. I've now played a considerable number of them and here are my favourite five... 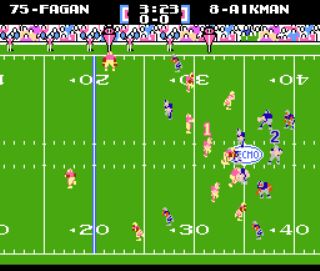 Since I didn't own Nintendo's grey toaster until long after its time has passed, this is by far my most recently-played game on this list despite being the second-oldest, but time has not diminished the enjoyment that it still provides aplenty. It's an over-head, side-scrolling effort and is notable for being the first officially licensed NFL game meaning gamers could play as their favourite team. The graphics are a little ropey with quite a bit of flicker but it doesn't hamper the gameplay too much which is a mixture of fast-paced, arcade-style action and more in-depth, strategic play. The presentation and audio creates a great atmosphere but the most impressive thing about this game is the number of options and play-modes - it even has a management option! It's quite basic as you might expect but impressive all the same! 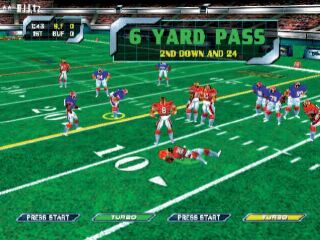 The most recent game on this list and therefore the flashiest is unusual for a sports game in that it's actually an arcade conversion. This of course means that it's much faster-paced than most other gridiron games and is similarly unrealistic. There are less players on the field for one thing, and first-downs require a 30-yard gain as well, which makes an already tough game even harder! Other arcadey additions include the 'On Fire' mode which sees your chosen player gifted with enhanced abilities if you manage to achieve three passes in a row or something similar. Another advantage of its non-serious nature, as well as being on Sega's powerhouse console, is that it offers four-players the chance to participate simultaneously which can make for some pretty chaotic games! The only downside really is the frequently frustrating AI which does take some enjoyment out - it would probably be in the number one spot if it wasn't so unfair - but it's still a manic game which is good fun. 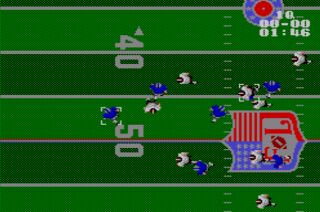 This was the first American Football game I ever played. I didn't actually own it but was introduced to me by my good friend Luke (who ironically hates sports games). The action is viewed from a slighty zoomed-in, direct-overhead viewpoint which scrolls vertically up and down the field which works well in most cases including here, and the sound is appealing too - there's even some sampled speech (I love the way it says 'interception'). Although not officially licensed, there are close copies of all the major teams to choose from and it's a surprisingly involving effort for such a complicated sport on such a basic system - it has several play modes and difficulties and, unlike Great Football, has lots of plays which are easy to choose and execute. A fondly-remembered game which still plays well today! 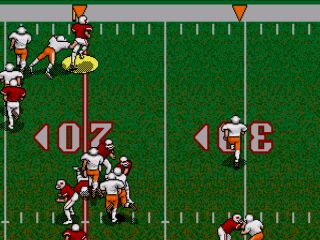 Apparently created as a rival for EA's Madden series, the Joe Montana Football games were never as successful as their rivals but they did give birth to the short-lived-but-impressive 'Sports Talk' brand. This entry in the series is also the game that really got me interested in the sport to begin with and is the reason I've supported the 49ers for about 18 years now! As far as the game is concerned, there's plenty of options and play-modes to get stuck into and, unusually, the action is viewed from an angled-overhead perspective which scrolls horizontally. It features some really nice zoomed-in graphics when the play requires it too, but the real 'talking point' (har har!) is the masses of sampled speech which literally creates a running commentary. A superbly playable (if slightly easy) game with audio which amazed me back then and still impresses today. 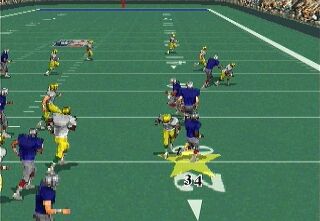 As much as it pains me to have a bloody EA game at the top of the list, this entry in the long-running series really was a special game. Good thing too as I put a lot of effort into finding a copy of it which, being a 3DO game, wasn't easy! I believe it was the first true 3D game of its type and EA used the power of the 3DO and the capacity of its CD-based storage to their full advantage to produce a remarkably comprehensive game which featured lovely intros and presentation similar to TV coverage including many clips of Mr. Madden himself offering advice and analysis, multiple clips of each team in action, some historical coverage, and there was even the option to play as one of many famous championship-winning teams of the past. Combine this with stacks of stats and options as well as fantastically balanced and intuitive gameplay, and the result is the most enjoyable American Football game I've yet played...
Posted by RetroKingSimon at 20:28