Back in the late 80's, my good friend Luke and I were both proud owners of Sega's Master System. We were both still at school though, so we couldn't afford new games very often, but we frequently ogled the games we wanted in the various magazines of the day, and on both of our lists was this exciting-sounding game by Sega. It's actually one of the first games by Yuki Naka who would later go on to head Sonic Team and was released earlier in the same year in Japan as a game based on the popular manga and anime series, Fist of the North Star. Rather than using this opportunity to introduce it to the rest of us though, its release in other territories saw a change in theme to the generic karate game we have before us. This was all unknown to Luke and I at the time of course, and despite the atrocious cover art (see here) it's a game I always found very enticing. 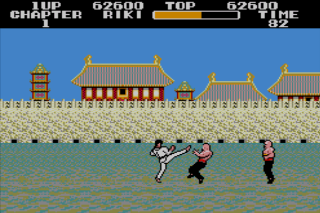 Apparently inspired by Irem's Kung Fu Master, even to the point of borrowing its 'plot', Sega's game introduces the martial arts master, Riki, whose girlfriend has been kidnapped by a rival gang. Blinded by love to the obvious dangers ahead, Riki immediately sets out to rescue her by kicking and punching his way across six scrolling stages of enemy goons. His repertoire of moves is restricted to a punch or kick, both of which can be performed while standing or squatting, and he can also unleash a flying kick. Each stage features just one type of standard enemy who are each felled (and then explode) by one of Riki's strikes. There are also one or more mid-bosses, who are usually armed, before the main end-of-stage battle against a much stronger foe. 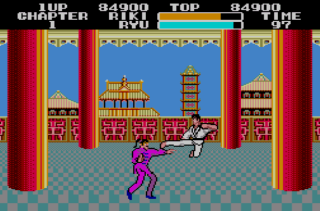 Enemy strikes deplete Riki's health-bar but this can be replenished by performing a high-jump (jump while squatting) to grab the icons that occasionally float along the top of the screen. As well as several types of food to refill your energy, there's also a temporary shield, but they're tricky to grab without taking any damage as the buffoons running backwards and forwards along the single-plane landscapes are infinite and quite quick too. They're also pretty small, as is Riki himself. The level of detail isn't too impressive on most sprites either but the mid and end-of-stage bosses are quite varied and a bit more detailed too. Confrontations with the latter sees the view zoom in a little, and therefore the level of detail increase a little, as the game (briefly) switches to a one-on-one brawler complete with unique backgrounds. 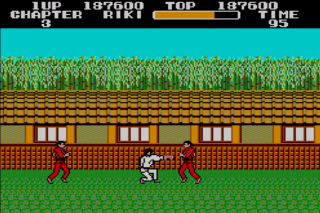 Each of the stages also has its own backdrop and tune, of course, but these are little better than average which sums up the whole game really. It would probably have proved a reasonably entertaining game to play every now and then when it came out but it's not aged too well. There's no incentive to play for points since the enemies are never-ending. There is a time limit, admittedly, but it's not a very strict one which is probably because the stages aren't very long - if you were forced to rush through them, each would probably last a couple of minutes at most, not including the boss fights which are, incidentally, the only times you'll need to use more than one brain cell! Playing through the rest of the game, though, is a bit of a chore and there's a few scrolling fightings games on the MS which are much more enjoyable. Sometimes these games I've been meaning to play for so many years are worth the wait. Sadly, Black Belt isn't one of them.