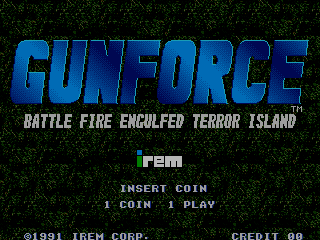 Whether they involve complex strategies or just straight-out chaotic shooting, war games are almost always an exciting proposition. Some of them are based on real conflicts through history, or even assumed ones in our future, but others give you few details of your cause, just or not. This early 90's effort from Irem is apparently one of the latter. It's a two-player game starring two unnamed soldiers. The brief intro sequence shows one or both of them parachuting from a plane into what appears to be a jungle. I guess that means it could be a game based on the Vietnam War, or perhaps a battle to oust a South American or African dictator, although I'm not convinced it's any of these judging from some of the equipment up for grabs! Wherever (or whenever) it is though, you're now deep behind enemy lines and thrust straight into the action. 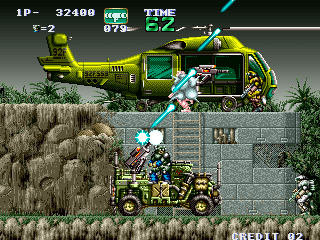 There are six missions, such as bases, a supply depot, or a communications tower, to blast your way through and they all apparently have set objectives, but what these all predictably boil down to is shooting the crap out of the enemy grunts which pour onto the screen from both directions, and then the boss which is usually a heavily armed device complemented by a cadre of normal enemies rather than any one super-soldier of some sort. Most parts of the side-viewed stages are multi-tiered and enemies can be found on any of these. Our heroic soldiers can also use whichever they want but only if they can reach them. They can't jump very high but there is an occasional helpfully-placed ladder to assist (which, splendidly, they can still fire from). Also splendidly, contact with enemy soldiers does not harm either player. Contact with their bullets does, however, and there's a good few of these flying around - one hit and you'll lose one of your three lives. 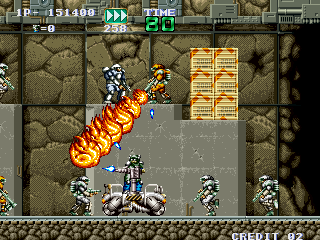 You'll start the game with a fairly weedy semi-automatic rifle. It's not very powerful but it does come with infinite ammo. Many of your enemies are more heavily-armed than you but if you manage to pick one off you can collect his weapon. These do not have infinite ammo but are obviously much more powerful. They include a fully-automatic machine gun (which looks like an M60), RPG gun, flame-thrower, and lazer which all have their strengths and weaknesses. If you manage to kill an enemy in possession of a vehicle, you can also commandeer those as well. These include some strange contraptions resembling motorbikes, jeeps, cable-cars, and even tanks and helicopters, and all of them offers a degree of protection from enemy fire whilst coming equipped their own powerful weapons which have infinite ammo. Don't go too mad though - they can be destroyed too! 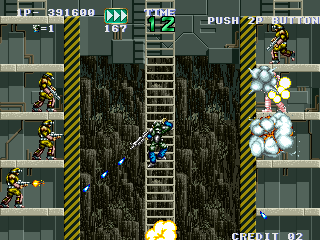 As you've probably already guessed, Irem must've taken a long look in the direction of Contra while developing this game, and the result is a game that doesn't do much that Konami's game doesn't do. Some sections and bosses even seem to be directly lifted from Mad Dog and Scorpion's adventure. That obviously means that GunForce isn't an original game but that doesn't necessarily stop it from being a good game. The graphics are a bit of a mixed bag though. The sprites are quite well-detailed - the player characters wear foliage-camouflage and the enemy soldiers wear an assortment of body armour and outfits, for example, and the weapon effects and explosions aren't bad either. The only complaint really is the background and foreground graphics which vary little from one stage to the next - most of the time they consist of grey or brown rock or metal. If I jumbled up the order of all the screenshots I grabbed while playing this, I'd have trouble telling which shots came from which stage! 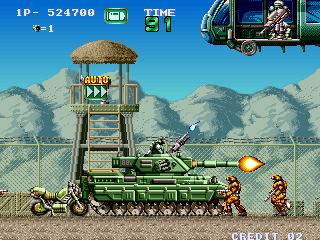 On the other hand, I suppose they are quite realistic - there's only so many ways to portray military installations after all! The audio is of a pretty decent standard. The music is typical of the genre - fairly intense and upbeat - and the effects are great, especially the weapon effects and the agonising scream of the player characters as they lose a life (something the enemy soldiers don't do - perhaps they are evil androids, or maybe just a bit tougher). Control over them is pretty good too. They move around with a bit of inertia rather than being able to turn at a pixel's notice and they can shoot in the eight usual directions (although only directly down when on a higher platform). Climbing up ladders or small platforms can be a little fiddly but there's no major issues. Like most games of this type though, it can be pretty tough going, particularly the bosses. 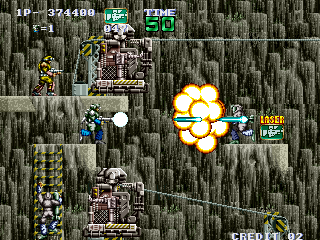 Actually, that only applies to some of the bosses as their difficulty is a little inconsistent. It took me a good few credits to take down the second boss, which is basically a room with four ceiling-mounted guns surrounded by normal (and infinite) soldiers, but the third boss, a series of communications dishes on the roof of a tower, was ultra-easy! The stages themselves are great fun though, and not just when you get your hands on one of the vehicles, although I did have a 'blast' (har har!) with the tank! They break up the platforming action nicely but the various weapons are in plentiful supply so much destruction can be wreaked without them as well! It's not a game that requires much brain power to play. It certainly wasn't the first game of its type and it isn't original or even creative - a bit of attention in these areas would've made it much better - but it is an intense, exciting, and addictive game. I admittedly have a little troubling accurately defining run 'n' gun games sometimes but ones like GunForce are the epitome of the genre.