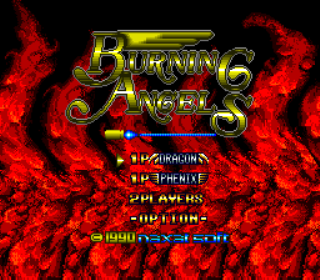 When I was a much younger and less-experienced gamer shmups were probably my favourite genre, but for some reason I was always under the impression that ones which allowed two-players to participate in the on-screen action simultaneously were rare and precious gems to be cherished beyond all others. In more recent years of course, I've discovered that they're far more common than I realised, and this effort from Naxat is another one. Ironically it was an exclusive release for NEC's fine machine, as many shmups were, which was an odd decision considering it's a machine which only has one controller port! So, only Engine owners who were lucky enough to own a multi-tap could play the game as Naxat intended, but was it really worth the effort? I seldom have the opportunity to play games like this with a second player so I'm hoping my hitherto smashing relationship with Naxat extends to this game and its single player mode as well!

Judging from the short but lively intro sequence, the story involves some scary-looking evil dude who attacks and takes Dr Kaga, the 'Burning Project Leader', prisoner. It then falls to two busty anime babes to rescue her, each of whom has their own ship - the Dragon and Phenix respectively - which must be piloted through five stages of vertically-scrolling action. Each ship is about the same size, has an energy bar, and behaves in more-or-less the same way, but they have noticeably different armaments - the former starts with a narrow wave shot while the (possibly mis-spelt) latter has energy spheres of some sort. These are the only main weapons the ships can deploy but both can be powered-up two times by collecting the 'P' icons that special enemy craft drop when destroyed. These see the wave shot increase in widthe and the energy shot take the form of a spread-shot, and they can also be supplemented by collecting the appropriately lettered icons - 'B' for drones (fixed for the Dragon, rolling for the Phenix) which provide fire of their own and 'M' for missiles.

As far as the weapons are concerned, that's about as exciting as it gets except for one thing. You may notice when playing that the aforementioned 'power-up droppers' sometimes (quite often, actually) leave behind star icons, and collecting them gradually fills up a small meter located in the middle of the status panel, but trying to use this meter initially proved futile. This puzzled me for a while but it turns out that it's a power-meter for a special attack! Luckily it's available in both one or two-player modes and is accessed via a rather unintuitive combination of buttons which combines the two ships (the second one briefly appears from off-screen in one-player mode). The former mode allows you to choose between two attacks - a super-laser-beam (Dragon) or a temporary invincibility/kamikaze attack type thing (Phenix) whilst with two-players, whoever activates the special will see their ship's attack result from the brief union. Use of either depletes the power-bar pretty quickly so they're best saved for emergencies!

For shmup standards, the number of enemies swarming around you isn't great and the amount of bullets spewed forth by them isn't massively high either, but Burning Angels remains a pretty tough game. You have only one life with no continues for starters! Collecting power-ups does more than help you offensively though - for each icon collected, you can take a hit without losing energy, instead losing power-ups one at a time until you're left with the ship you started the game with. Extra energy is occasionally available from the same ships as the power-ups and you'll need it too - your energy isn't even refilled after a boss fight, and considering the bosses are the toughest parts of the game, this means the starts of stages can often be as nerve-wracking as the ends! The enemies vary in size quite a bit with some teeny ones zipping around, some much larger but less mobile ones unleashing laser beams of death, and everything in-between.

Many of the enemies fire homing weapons so these ones need to be identified and taken out as quickly as possible. As the game wears on, more and more of them start appearing from the bottom of the screen too but it is just enemy ships and their weapons that you have to worry about - there's no moving scenery or wall-mounted cannons to contend with here! As mentioned though, it's the bosses that prove to be the toughest of all, quite rightly I suppose. Most stages feature a mid-boss as well as the final boss, and they also seem to favour homing attacks as well as moving around the screen, and some of them charge you as well which can cause a massive loss of energy if you're not careful. If you're thinking that it will be easier with two-players though, you'd be mistaken - the number of enemies increases for one thing, including the homing missile launchers! It's not a particularly long game though - it can be completed in under twenty minutes - so it shouldn't take too long to get enough practise.

This also means that there's not a huge amount to see during the five stages. Their design includes some of the usuals - cityscape, desert, rocky chasm, scary alien base, and river/sea (it looks watery, at least!) so they're not very original, and they don't look especially nice either. The sprites and their subsequent explosions aren't that great, although there is a reasonable number of different ones. It's not all bad though. Some stages feature a little parallax scrolling here and there though and the title screen has a decent wibbly effect much like Thunder Force 3's second stage (but flipped ninety degrees and not fiery). Plus, the intro/cut-scene sequences are pretty good while they last too - our two girlies engage in between-stage chats (in Japanese) whilst sat in provocative positions. Which is nice. It's a fairly nice sounding game as well, with some decent, catchy tunes, but I'm not so keen on the sounds effects - you'll soon come to resent the annoying 'taken damage' effect - grrr!

As you may have guessed already, Burning Angels is pretty much just another alien-smashing vertical-scroller. Two-player modes are more common than I once thought so it doesn't really have that as a gimmick, but it was apparently intended to be played as a two-player game - the second player's stats panel is still on-screen during single-player games and the between-stage cut-scenes show both characters, for example. About the only remotely original thing here is the exclusively female character roster, so if that does it for you this is your game, but I personally just didn't find it interesting enough and it's rather frustrating too - I frequently took damage without even knowing what had caused it. It's far from being a terrible game, and Burning Angels doesn't really do anything wrong, it just doesn't do anything particularly right either, and there's almost nothing here that any self-respecting shmup fan won't have seen before. Give it a try by all means, just don't expect to be blown away.