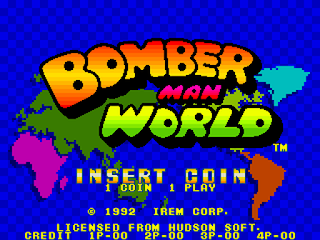 For our next visit to Bomberland we return to the arcades - a place our explodey friends have visited surprisingly few times over the course of their careers, and only once prior to this release. Like the previous effort, Bomberman World is again brought to us by Irem and should prove very familiar to fans of the first game. It's actually little more than an update, although I guess you could say that about several games in the long series. The backstory sees the return of the heinous King Bomber and, after briefly trying to reform himself, he has 'reverted to his evil ways' and deployed robot armies across the world. These idiotic clankers have now taken control of the UN building so the Bomberman Brothers (who apparently number four now - White, Red, Yellow and Blue - as the game is four-player) begin their 'ultimate battle to save the world from an evil takeover'. That's jolly decent of the pyromaniacal imps.

I'm not sure how many stages are meant to be in or around the UN building but they are all pretty much the same as usual. We again have the choice of the Normal or Battle Game, both of which are available for up to four players to oaf around with. I spent more time with the Normal Game as I usually do, and found few surprises, but that's just fine when we're talking Bomberman. There are six areas in total - Far East, Africa, South America, Greenland, India, and last North America. Each is themed (temples, sand, volcanoes, ice, rocky, and city respectively) and consists of six stages, the last of which is where you'll face the mighty boss before (hopefully) earning passage to the next. Prior to this confrontation is a handy bonus stage full of goodies, assuming you grabbed the B-O-N-U-S letters on preceding stages.

As with the previous arcade game but unlike most home versions, you only need to get rid of the enemies to clear each stage (within the time limit), but near enough every destructible block houses a power-up of some sort. Some familiar ones are here (extra bombs, range extender, speed-up, etc), others are missing (the absence of bomb-kick is keenly felt), and there are also a few new ones, not all of which are helpful. One of them, for example, allows your bomb blasts to go round corners. This can be quite handy but can easily catch you out too. In fact, they catch me out so often I don't bother collecting them anymore, and frown like a Moomin if I collect one by accident. I guess it's a nice idea though! Fortunately, if you struggle with them as I do, you won't have to suffer for long since, as with the previous Irem game again, most of your power-ups will be gone when you start the next stage.

So yes, though Bomberman games are already super-arcadey, Irem have managed to make them even more so. Stages are quick, even with just one player, and it's a bit tougher than normal Bomberman games, mainly thanks to several annoying enemies like one type which buries your bombs in sand or another that charges towards you as soon as they see you. The Normal Game is good fun and the Battle Game is a great for a laugh with friends as always, and can be played using computery opponents too. Aside from the four-player support though, Bomberman World is very similar to Irem's previous game, and could even be a tiny bit worse owing to slightly duller graphics. I also had a few issues with the controls but that's probably me rather than the game. Either way, it's more or less the same game overall, but when that game is Bomberman it's (nearly) always well worth playing.