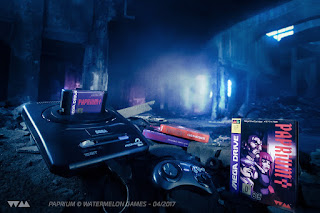 Everyone knows Streets of Rage 2 is the greatest scrolling fighting game of all time so it's somewhat surprising that there have been so few clones, tributes, or sequels to Sega's undisputed masterpiece over the intervening years, official or otherwise. Yes, there was a direct MegaDrive sequel, generally considered to be a step back, and there have obviously been many further examples of the genre, but none that attempted to duplicate SOR2's distinctive style (or if they did it wasn't particularly successful!). We did get the crazy Beats of Rage but not much else has emerged from the retro scene that I'm aware of. Now, however, that has changed and then some, for arriving very soon is this oddly-named example from Watermelon Games, the same team responsible for Pier Solar, surely one of the most best known of all homebrew releases. 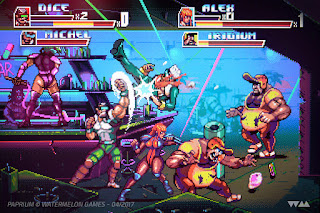 Okay, I'm a bit late with this news. I first heard about it months ago but kept forgetting to take a look at the game. I have now though, and it looks frankly remarkable! The name comes from the game's setting - Paprium is huge city that arose in Asia following a short but devastating nuclear war, and apparently crime is rife for it's our job to take out the trash! There will apparently be five characters for one or two players to choose from and an amazing twenty-four stages to battle through, but as well as being vast in size it's also looking pretty stunning from a technical point of view as well. Most of the sprites look to be pretty big - huge for a game of this type actually, and bigger than any SOR game, and there's a large and varied roster of creatively-designed and nicely-animated characters too. Just look at some of the crazy bastards! 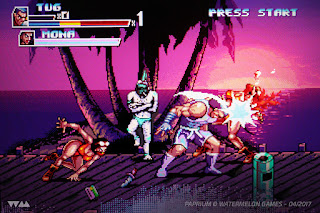 Most of the backgrounds also look really nice and the foregrounds are fantastic. The near-future urban theme suits the SOR2 style and everything looks ultra-well defined and nicely coloured - they must've used some sort of witchcraft to increase the number available at once! The game is even running at 60fps, and assuming the music in the trailer is actually in-game choons from the real game, it looks (or sounds) like we're in for a treat there too. Like their previous game, Watermelon are releasing Paprium on cartridge for use with an actual MegaDrive (and exclusively so it seems) and unsurprisingly an enormous example is needed to house all this awesomeness - an 80Meg monster no less, which is supposedly the biggest MD cart ever! The game is so large, in fact, there are even three save-game slots to help you through its many stages. 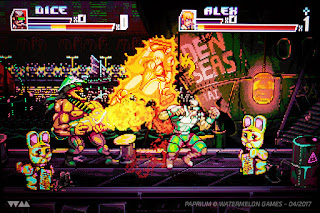 Some things can't be determined from screenshots or teaser-trailers of course, such as the difficulty, the range of offensive moves, and the controls - all of which were not far off perfect with Streets of Rage 2 - so it's probably a little premature to proclaim it the king of scrolling fighting games or SOR2's spiritual successor, but it's definitely looking very promising. It looks and (probably) sounds ultra-fantastic and there are a crapload of creative-looking stages with stuff that can be picked up or jumped around on. I really can't wait to play it. It was actually supposed to already be out by now but an apparent financial dispute with PayPal has caused a delay until next year. You can still pre-order one of the three different packs on offer though, and however much longer it takes, it looks like being well worth waiting for.

Find out more about this amazing homebrew title at Watermelon's special website here. Alternatively, check out the trailer to see a snippet of this wonderful game in action :)