The Nintendo Switch - One Year On...

It has now been one year since Nintendo first revealed details of their new console, the Switch, and eight months since its actual release. To be honest, I had largely forgotten about it for many of those months, partly on account of seeing/hearing almost nothing about it in social media and the like. Chatter has recently picked up a little owing to Super Mario Odyssey's release though, so I figured I'd take another look at it and see if there is yet justification for me to get one. 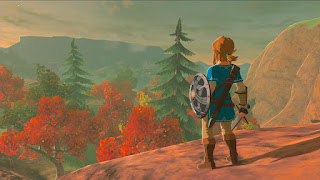 Since my last post on the subject I've actually had the chance to play around with a Switch a little and it's definitely a nice bit of kit. I found the detachable bits of the main controller a little small for using on their own but apart that it's real nice. As expected, Mario Kart 8 is a lot of fun, especially when racing against a friend, and The Legend of Zelda: Breath of the Wild is absolutely stunning and will almost certainly go down as an all-time great. I've already been hearing similar things about Mario's new adventure too. I thought it looked a bit stinky from the early shots/videos (I don't like that there are parts set in the 'real world') but it's great to hear such glowing reports so far. I have only had the chance to sample the two games though, so what else is there?

I haven't heard about much that's for sure. I know all about Super Bomberman R and it's an attractive proposition as all Bomberman games are, and I was keen to give Ultra Street Fighter II a go, but both games cost way too much, and I only have a passing knowledge of any other proper full retail releases. A few Facebook friends have briefly mentioned the likes of Splatoon 2 and Arms, and I believe there's some sort of 'Rabbids' game but I don't actually know much about any of them. 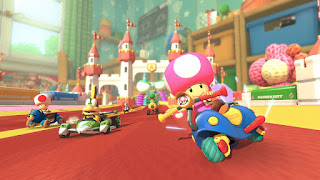 Subsequent research reveals the existence of a few other possibly-interesting tiles such as Rayman Legends, Disgaea 5, Fate/Extella: The Umbral Star, Sine Mora EX, and a handful of sports games and licensed stuff, but the Switch's software library is apparently as small as I thought. Even Skyrim isn't out yet! To be honest, aside from the two big guns, the only games I might've been interested in buying are some of the few indie titles to have received physical releases such as Wonder Boy: The Dragon's Trap, Shovel Knight, and Sonic Mania, but... I've already got them on Steam! I'm sure there will be others over the months and years and it would be nice to have physical copies of some, but c'mon man - is this really what owning a current-gen console is about?

Back when I wrote my previous post on this subject I was worried about what kind of third-party support the Switch might receive (or not), and it looks like my fears were well-founded. Both the Wii and WiiU suffered in this regard in my opinion. It didn't affect the sales of the former, admittedly, but it still would've been nice to see some of the big name releases on Nintendo's consoles. It seems like they've become all about hardware gimmicks and first-party titles and little else nowadays. 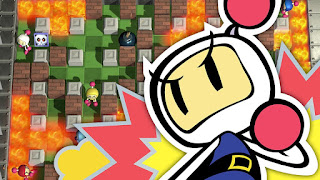 I guess it's better than them going the same way as Sega but they still need to have a decent range of games for their systems surely? What are your options if you want a proper driving or fighting game? Or one of those pesky first-person shooters that are so popular these days? A quick look at the release schedule doesn't look particularly promising from where I'm watching either, aside from new Kirby and Yoshi games next year. There is undoubtedly some enjoyment to be had from owning a Switch - two games from its thus-far-meagre library are stunners - but for any serious gamer it's surely a system to sit beside a PS4 or Xbone, not in place of one. Then again, what do I know? A guy at my work has one and loves it; maybe quality really is better than quantity.

So what do you guys say? I'm sure a few of you own Switches - are you happy with your purchase? Do you own anything other than Zelda, Mario, or Mario Kart? Have I neglected to mention any top quality games? I was actually hoping that might be the case - I was kind of looking for a reason to get excited about the Switch, perhaps even buy one, but I can't help feeling even more disillusioned than a year ago. Oh well, I guess it is still early days yet, huh?