There's something very 80's about treasure hunt films in my mind. I'm not quite sure if that's because there were a lot of them or if it's just because there were a few notable examples that stuck in my mind (most likely the latter), but for some reason I had far less interest in the genre by the time Jon Turteltaub conjured up the first National Treasure film some years later. Many apparently were interested though, as it was successful enough to spawn a sequel, and both were recently recommended by a friend, so I set aside my apathy and watched them. My main question prior to this, however, was: could they be as much fun as their 80's forebears? 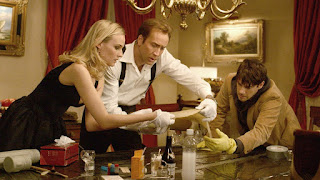 Leading the impressive cast is the usually-dependable Nicolas Cage as Benjamin Gates, a historian and cryptologist who has long believed in a story from his childhood about a great treasure hidden by the Founding Fathers and Freemasons; a treasure he may have found the first clue to the location of. As you might expect, the clue just leads to another clue, and then another, all of which are followed confidently and enthusiastically by Gates who is joined by his sceptical father (Jon Voight), friend Riley (Justin Bartha), and Dr Abigail Chase (Diane Kruger) of the National Archives who is roped into helping. As skillful as they may be at deciphering the cryptic clues and secret codes and following the trail they lay out, however, they'll have to hurry as not only have they attracted the attention of the FBI (led by Harvey Keitel) but there is also an 'evil' group chasing the booty at the same time, led by Ian Howe (Sean Bean) who has less noble plans. 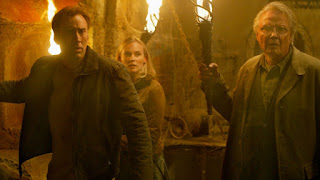 The basic outline is pretty much the same as most previous efforts then, and like many of them it's all very silly, predictable stuff. There are tons of plot-holes and lucky coincidences and Ben Gate's ability to almost immediately understand every puzzle put before him strains the film's credibility somewhat. It's unlikely you would be watching a big-budget Hollywood production with this name and this star if you were expecting a slow-moving, intricately-woven mystery though, and accordingly you're pretty much getting what you would expect with the film. The characters don't have much depth and their dialogue is laughably bad at times, but the performances are reasonably likeable, with Voight and Bartha providing most of the laughs, and it's quite good fun during all but the most ridiculous moments. You'll almost certainly forget it as soon as the credits roll but there are worse films to spend an evening wincing through.. 6/10 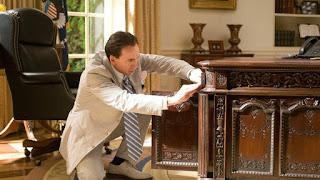 When we catch up with Gates we find that, unlike the beginning of the first film, he's now a respected historian giving lectures. That is until Mitch Wilkinson (Ed Harris), a black market antiquities dealer, turns up at a lecture and provides apparent proof that one of Ben's ancestors was the main architect of the assassination of President Lincoln. Naturally, neither Ben nor his father will stand for their good family name being besmirched so they set out to prove the outrageous claims to be false. Abigail and Riley return to help them in their quest and they're joined this time, somewhat implausibly, by Ben's mother too (Helen Mirren)! Before long, after procuring more clues, secret codes and ancient artifacts, they find themselves on the trail of not only the truth about Lincoln's assassination but also yet more treasure, with the dastardly Mitch hot on their tail. 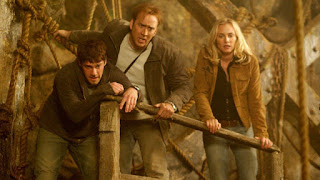 So basically then, it's more of the same - Ben and his gang managing to find immense treasures in a few days that have remained unknown altogether, much less unfound, for 150-odd years, and all while being pursued by an apparently-equally brilliant but morally corrupt fiend intent on personal gain, etc. It's no surprise to find the exact same format as before I guess. It was effective and pretty popular before but somehow it all seems even sillier this time, preposterous even. The 'Book of Secrets' itself (which sounds like it was named by a child) is perhaps the silliest - the fact that it is stored in such a lackadaisical fashion, or indeed the fact that it exists at all - but near enough everything here is rather too far-fetched to be hugely entertaining. The cast are okay, the production values are fine, and it's pretty entertaining for much of its runtime, but like the first film it's presented too seriously to be as much fun as the 80's classics, and I found myself rolling my eyes far too often to give it a good score, so... 5/10

Yes, that's all - mercifully there are only the two films in this series, although worryingly there have long been whispers of a belated third. Eeek! Oh well, until that does or doesn't appear, here's a trailer for the slightly-less-stupid first film: