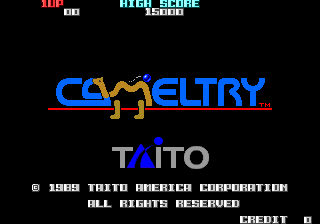 There have been a few unlikely heroes to feature in games over the years but this apparently little-known Taito effort which appeared at the close of the 80's stars one of the strangest. The hero here, you see, is a glass ball! He doesn't appear to be a mere object either but a sentient being with hopes and dreams of his own which it's up to you to help him fulfill by steering him through a number of floating mazes. Doing this is a simple enough job which requires you to rotate each maze around the ball until he has found his way to the exit. Of course, this all has to be done within a strict time limit and the mazes feature numerous traps and hazards, most of which are seemingly intent on halting your progress. 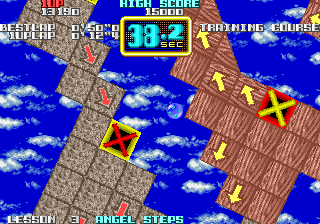 Before you start playing, however, you must choose a course. There are four available although not all can be selected straight away. The Training and Beginner courses both consist of six stages. If you can handle these easily enough there is also an Expert course featuring eight stages and a Special course which houses the final ten stages. The mazes are all viewed directly from above and despite being rather unrealistic in many senses, they do obey the rules of physics. Or more accurately, the ball does while inside them. Accordingly, it will always fall downwards and it's quite a weighty little thing too. With this in mind it may sound like a fairly straightforward premise, and I suppose it is, but it's not without its complications! 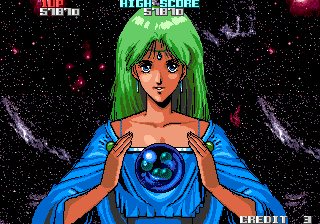 The maze walls are made of a variety of materials - stone, wood, metal, etc - but regardless of this the ball will react the same way when it hits them - it stops! Luckily you can make it 'jump' so getting stuck is rare but the stages get more and more complex as you go so guiding the ball through them within the time limit becomes increasingly challenging. Many of the wall-blocks have helpful arrows on them but, as you might expect, the traps and features become far more numerous the further you get. One of the first you'll encounter, as early as the training course no less, are time-penalty blocks. Touching one of these will cost you either two or five seconds depending on their colour and they remain the blocks to be most wary of throughout the game. 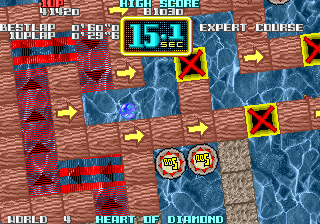 Other features include pinball machine-style bumpers and pins, 'traffic-light' blocks (red for stop, green for go), single-direction conveyor-belt style passages, and smaller breakable blocks (usually forming a barrier of course) some of which give you a time bonus/penalty or a points bonus. The time you have remaining at the end of a stage determines how much you'll have on the next so another helpful feature is the fruit machine-style bonus round which appears between stages. If you're fast enough (or lucky enough) you can gain some extra time for the forthcoming stage here, and similarly, after you lose your last life there is a final opportunity to gain a few more precious seconds. 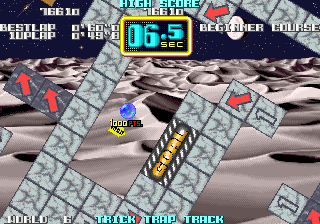 This kind of thing is typical of the presentation here which is of Taito's usual high standard. It's not a technically-demanding game and could be comfortably converted to the home systems of the time (and did in fact appear on the SNES where it was known as On The Ball) but the stages are all neat and well-drawn and there are a decent number of mostly-nice backgrounds the game cycles through. The music isn't especially memorable but suits the often-frantic nature of the gameplay well enough and some of the sound effects are superb such as the shattering noise that accompanies ball 'death'. The intro/menu screens are all nice too and the game has a nice feel overall which includes how it plays. 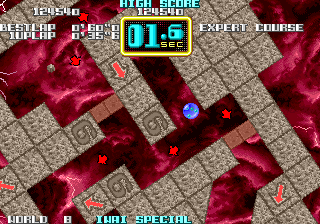 The only problem I really have with the game is its longevity. I completed the Training and Beginner courses on my first try and the Expert course after only one continue. The Special course isn't significantly tougher either and the whole thing can be finished fairly quickly. It's not a game which has huge stages to explore on subsequent plays either - each is fairly short and very much a race against the clock so it could've done with a few more stages really. That said, it is addictive, even after completion, and the time-based nature of play means the lure of setting new records remains strong. Indeed, it's technically possible to complete most, possibly all of the stages without even touching any of the walls, so there is at least some personal challenges to play for! 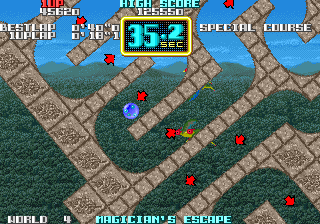 So, Cameltry is fairly original and great fun but it won't take too long to see all it has to offer. This doesn't make it a bad game though, and being an arcade game it must've been something of a welcome break from the 'death-every-ten-seconds' type of games more usually found on its patch. I think my favourite thing about the game is that success is entirely dependant on the skill of the player rather than luck and it's a game that rewards repeat-plays too. I'll be interested to see if the SNES version attempted to extend the longevity at all but as an arcade game, Cameltry (pronounced Camel-tree?) is very addictive and great fun to play through, as is usually the case with Taito games. If you get the chance, give it a try - you might love it. Just don't play it when you're drunk!