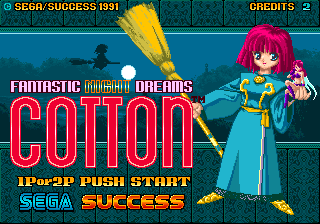 Unlike most unpleasant Western examples, witches in Japanese culture generally seem to be quite perky and cheerful characters. This could be because they're often represented by teenage girlies of course, rather than old green hags who've had years to dwell on their misfortunes in solitude, and their exploits are often charted in manga and anime publications (such as the splendid Kiki's Delivery Service). As far as videogames are concerned, the pickings are noticeably slimmer, but there are a few feisty examples doing the rounds, or more accurately, there were, and Cotton is unquestionably the most well-known example of this exclusive group. She's a red-haired young lady who has a fondness for a candy called 'Willow' and it's her pursuit of this elusive confectionery that forms the basis for her numerous adventures, including this one. 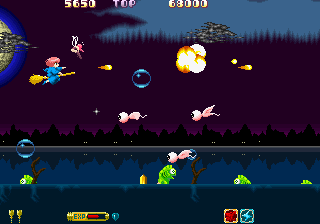 This game, subtitled 'Fantastic Night Dreams', is the first game in the series that bears her name and sees Cotton undertaking her usual quest to appropriate some Willow which inevitably involves a confrontation with her arch nemesis, an evil demoness called Wool. This quest takes in six horizontally-scrolling stages, which she flies through on her trusty broomstick, which are full of many heinous creatures who are presumably minions of the wicked Wool. Cotton can shoot magical shots from her finger-tips which is enough to take down most of the spooky monsters, she can drop short range bombs, and she also has a limited number of much more powerful charge shots available too which come in two forms - crackly lightning and fiery dragons, both of which will incinerate anything that comes into contact with them. 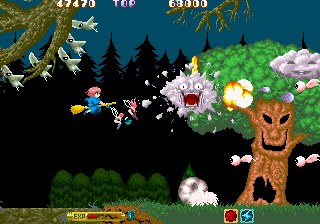 The enemies come in many familiar shapes and sizes including small formation-flying creatures, less-numerous larger ones, a few ground-based cretins, and of course large middle and end-of-level bosses. Destroying larger enemies or groups of smaller ones releases gold bars which fill Cotton's 'experience meter'. Each time it's filled, her shot power increases but it's also possible to shoot the bars until they change colour. These instead give her an additional charge shot, and her bombs can also be upgraded. The only other help Cotton gets comes in the form of her fairy sidekick called Silk who follows her around, acting much like an 'option' or drone, complementing her firepower. Silk must have a few twins around too as Cotton can be accompanied by up to six fairies at once by which time she can pack quite a punch! 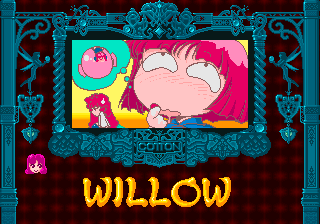 Sadly, there are no additional weapons to collect and that's surprising given the potential offered by the fantasy/magic setting, although this is also a much darker game than I initially thought it would be considering its cute and funny anime-style. The presentation is really nice too with lots of amusing cut-scenes depicting Cotton's search for Willow and lack of care for anything that isn't Willow! The graphics are also quite nice technically but I don't really like the style much. All the backgrounds are dark and gloomy and the sprites and a curious mixture of cute and scary. It doesn't really appeal to me much but technically it's certainly not a bad-looking game and the music and sound effects are pretty good too. I suppose it's quite atmospheric though, there's some genuinely creepy and unpleasant-looking enemies and there's also some nice effects like clouds passing across the moon. 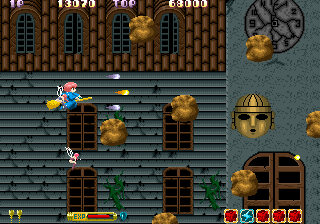 It's quite a tough game too and rather unforgiving. The stages themselves are packed with enemies attacking from the ground and air at once and Cotton's shots only ever go straight ahead no matter how powerful they are. If she loses a life her power-level will decrease and it doesn't take long until she's back at default levels from which it's very tough to continue. Cotton's fairly large size makes her an easy target and when she's got lots of fairies floating around her it makes her seem even bigger, particularly when she's fighting one of the bosses who pose a real challenge. I know that's the point but you can only continue once before you have to restart the stage. If you're anything like me though, most of your deaths will probably come from trying to collect all the gold and stuff. Oops! 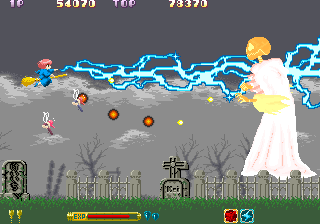 To be honest though, Cotton isn't really what I was expecting. All the images and promotional artwork I've seen periodically over the years indicated that this was a quirky, funny, typically Japanese cute 'em up. I like that kind of game and that's what I was hoping for but it's not really the case after all. It's a perfectly playable game and it has no major flaws really, aside from perhaps being a little unfair, but while Cotton herself is an appealing character, I'm afraid her game just didn't do it for me - it just didn't captivate me the way some shmups do and I consequently found myself not really being too bothered about continuing to play it. In fact, the reason there's no screenshots from beyond the second stage is because the game made me too angry to continue! That's not a good sign when playing a game of any genre. I'm probably making it sound terrible but it's really not - it's a reasonable enough game which is just missing that vital spark that would've make it a really good game.