If I may be permitted a brief diversion from the kind of subjects I typically cover here, allow me to relay a recent food-related adventure. Ever since my teens I've been very fond of spicy food. This has mostly consisted of Indian curries which are so prevalent here in the UK but apparently quite rare in other European or American countries. I was introduced to them indirectly by two friends, one of whom sadly passed away recently, who started buying Chinese curries and sharing them with me. I soon moved on to the Indian variety and proceeded to work my way up the scale of hotness, ending with the coveted chicken Phall. 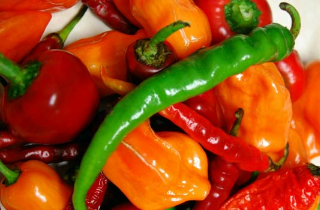 Soon, I was seeking ways to make other foods I liked spicy too. One of my first stops was the pizzas I had recently started eating. Spicing these up seemed simple - buy some chillies, chop them up, and sprinkle over the top! This is exactly what I did for many years and continue to today with the kinds of chillies most readily available to me which I have recently learned are called Anaheim Peppers and Poblano Peppers. Just last week, however, I made an unexpected pizza purchase and had no chillies available. Eating it without them was not a option so I had to venture down to my local 24/7 store to see if they had any. They did, but only an unfamiliar variety called Scotch Bonnets.

I bought them anyway, chopped up two, and spread them over the pizza as usual. After my first bite, my face and eyes immediately started sweating and my mouth felt like it had had been filled with some lava fresh from an erupting volcano! It seemed that these chillies were a little hotter than the ones I was used to. Nonetheless, I soldiered on. It was a challenge to say the least, and involved numerous pints of water being consumed, and probably several more pints being sweated out, but I was victorious in my battle against these super-chillies and my proud record of having never been defeated by spiciness remains intact! 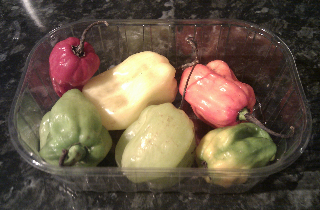 I was intrigued though, so I've spent the last half an hour or so learning all sorts about chillies and the Scoville scale which apparently measures their 'hotness', and things have become clearer. The two chillies I was most familiar with, the Anaheim pepper and the Poblano pepper, both measure between 1,000 and 2,500 on the Scoville scale. The popular Jalapeño pepper, so often a fixture in my Subway rolls, apparently measures 3,500 - 8,000. The Scotch Bonnet, however, weighs in at 100,000 - 350,000. The reason for my struggles was now more apparent, and it turns out that this variety of chilli is far from the hottest. There are three scarily-named ones - the Naga Viper pepper, the Infinity Chilli, and the Trinidad Scorpion pepper - all of which exceed the 1.3 million mark on the Scoville scale!

Dare I try of these one of these 'suicide chillies' one day? And while I'm on the subject, could eating one actually kill someone, I wonder? I think my days of eating super-spicy food is coming to an end. I'm getting old for one thing, and my wife doesn't like spicy food either so I suppose I'll have to be sensible from now on but I did enjoy this possibly-final incident and fondly remember the days when they used to be frequent. Then again, I do still have some of the Scotch Bonnets left...
Posted by RetroKingSimon at 18:43

Email ThisBlogThis!Share to TwitterShare to FacebookShare to Pinterest
Labels: Other Stuff - Food / Drink