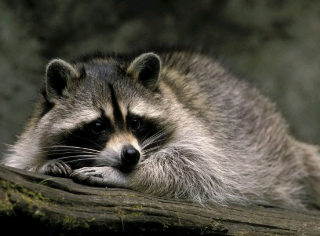 I imagine some of my North American friends won't be too keen on these mischievous creatures but since I don't live that side of the Atlantic they are rather intriguing to me! Much of their appeal no doubt comes from their distinctive appearance, but are they friends to us stupid Humans or are they foes? I suppose they're a bit like foxes are over here - they're about the same size, albeit with much shorter legs (while sharing their ringed tails with lemurs), and both are furry, omnivorous, nocturnal animals that are native to wooded areas, but which now also live in urban areas thanks to our recklessly-increasing population. This means many regard them as pests since they forage in people's gardens and steal their food! If they are pests though, I can't really see anyone else to blame, and they certainly look nice. Any readers across the Atlantic got any amusing raccoon tales to tell?

Why It Is Awesome: It wears a bandit mask!
Posted by RetroKingSimon at 19:45