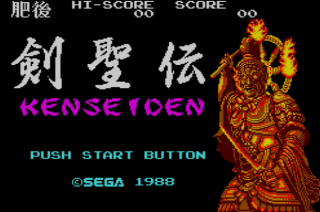 Has anyone here actually played Kenseiden? I have, as you might imagine since I'm writing about it, but I still find myself troubled as to deciding what genre it actually is. Most reviews and articles on the internet seem to think it's a platform game, as does as least one reader of this very blog who complained about its absence from the 'Top Five Master System Platform Games' feature. I, however, do not. I've always categorised a platform game as one in which the emphasis is on traversing platforms rather than being troubled by what's on them. But if it's not a platformer, what is it? I would have to say it's more of a run 'n' gun game, even though it features no guns, since the emphasis of the gameplay is more on defeating the enemies that are on the platforms. Read on for clarification! 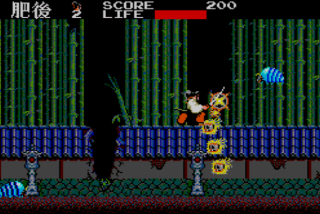 Well, whatever genre it belongs to, it's another one of those games I always wondered about all those years ago but have only come to play fairly recently. It's set in a fantasy version of feudal Japan, the 16th century to be more accurate, which has been invaded by evil Warlocks who have rained ruin and destruction upon the land, and also stolen the Sword of the Dragon King and the Five Secret Scrolls for good measure! The star of the show is a heroic lone samurai called Hayato who has the "blood of the Dragon King" running in his veins, apparently. Hopefully this will help him best the Warlocks, for failure will result in "a thousand centuries of terror". Oh nooo! :( 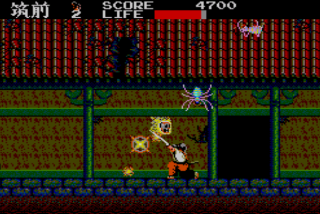 Hayato's mission will ultimately take him across all sixteen provinces of ancient Japan which are filled with legions of horrifying creatures loyal to the Warlocks. Although he may be filled with dragon's blood, sadly Hayato cannot breathe fire at these terrible abominations and is equipped only with his trusty samurai sword. The sixteen stages are set across some varied but familiar terrain for this kind of game including bamboo forests, temples, fiery caverns, waterfalls, and castles but after the second stage you can choose from several to play next from the map screen. Only seven of the stages contain a Warlock boss. Defeat of each of these will liberate one of the Secret Scrolls and the Sword of the Dragon King which bestow special abilities on Hayato such as new sword techniques or a higher jump. 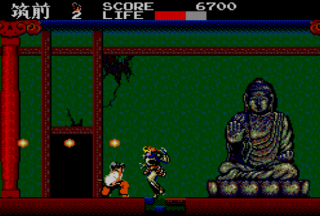 Some of the other stages are 'training stages' which are basically obstacle courses where you have to deflect or avoid arrows, jump across moving platforms, and that kind of thing. You don't have to finish these stages but, like the boss battles, they also have a reward waiting upon their successful completion such as a life-meter extension. Hayato can take a reasonable number of hits from enemies before losing a life but some take more energy than others. The minions of the Warlocks take a wide variety of forms including animals such as slugs, spiders, bats, and snakes, as well as more demonic warriors and even skeletons. All of them except for the bosses frequently and easily regenerate so they should only be tackled where necessary. Killing them does occasionally leave behind a collectable though such as extra energy, extra lives, or a sword which increases you attack power. 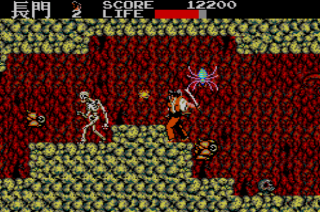 It probably sounds a bit like Shinobi so far and Kenseiden is a pretty similar game to Sega's better known adventure. The stages here are laid out in a familiar way - some are strictly 'run from left to right' affairs while others are multi-directional and multi-tiered, although Hayato lacks Musashi-san's ability to jump directly up to or down from other platforms. There's also lots of doorways dotted around, mostly on the multi-tiered stages, and finding your way around these can get rather maze-like at times! Some doors lead to bosses but most lead to new areas including roof-tops and bridges which must be crossed carefully as falling through a gap costs you a life and many of the cavern areas contain lava which is nearly as dangerous. Some sections need to be visited more than once too, which is even more of a reason to avoid the enemies where possible. 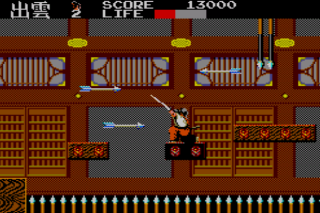 One area that Kenseiden pleasantly surprised me was with its aesthetics. Graphically, there's not a huge variety in terms of the style and, as mentioned, some areas need to be revisited, but new enemies and backdrops are slowly introduced through the game and their quality is consistently good, especially Hayato himself. The detail is also very impressive and this all helps to create a superbly authentic atmosphere which is complemented nicely by the decent soundtrack which mostly consists of slow, moody tunes that suit the action well. The animation isn't quite so hot though and Hayato looks quite amusing as he runs along. He's not particularly agile either and moves a bit clunkily for my tastes which makes some sections, such as the aforementioned gap-jumping, rather tough, especially as jumping into a previously-unseen enemy can knock you off too. Not that it makes much difference though as the entire game is very challenging! 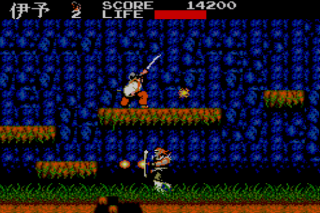 One of the major reasons for the game's difficulty is the regenerating enemies. At first I was trying to hack up everything that moves but it soon became apparent that a far better tactic is to run and to stop only when necessary (see - run 'n' gun, or at least run 'n' slash)! This can also be difficult though as some enemies will appear right on top of you giving you little chance of avoiding or killing them, at least before you've lost some precious life. The other major reason(s) for the game's difficulty are the boss battles which really are battles! The first one is a spinning 'fire wheel' (with a skull in the middle, of course, for maximum scariness) which whirls around the screen spitting deadly blue fire everywhere. It took me a good few tries to defeat this idiot and the others are even harder as you would expect! 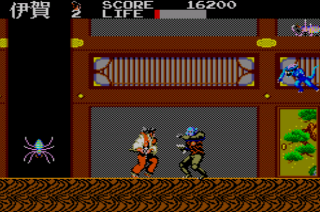 As long as you don't find it too frustrating though, Kenseiden is a well-designed and enjoyable game. It doesn't seem to be among the Master Systems best-known games though which is a little strange. It can't be played anywhere else, for one thing, and exclusives on Sega's 8-bit wonder were quite rare. I used to see an occasional screenshot of it but it never seemed to get much love, either from the magazines or from fellow MS gamers. If I were feeling cynical I could say it's little more than an annoying version of Shinobi, minus the shuriken-flinging tomfoolery, but the lesser-known of Sega's Far-Eastern romps is a genuinely good game in its own right and deserves a place in any Master System fan's collection, whatever genre you think it belongs to!