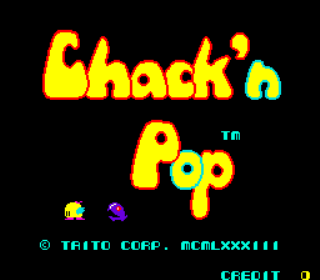 Any gamer who's not a moronic buffoon knows all about Taito's immensely fabulous Bubble Bobble. It was a game that took mid-80's arcades by storm and, unlike so many other games of the era, remains as popular today. It wasn't a particularly advanced game for its day but it was one of the first to demonstrate that design is more important than technical wizardry. It's also a game that's had a good few sequels over the subsequent years but, much to my surprise, I've recently discovered it has a semi-prequel as well which was released three years earlier. After spending the last few days playing it, there are clear signs of the game that would follow, but it doesn't play much like it. Both games are platformers consisting of multiple stages, each one screen in size, and they share a few character designs, but apart from that they're quite different games.

One of the major differences here is that it's just a one-player game. The star of the show is Chack'n who has been sent off on a dangerous quest by his missus to retrieve the hearts of their love. These have been scattered across fourteen maze-like stages and locked in cages. Chack'n can move around the stages by walking on the floors or ceilings and he he can jump a short distance but he can't walk on the walls. The stages are therefore designed in such a way that accessing each area often requires a bit of thought. This isn't helped by the fact that the mazes are patrolled by 'Monstas', the troublesome purple flying dudes that later reappeared in Bubble Bobble, who hatch from eggs hanging from the ceilings at the start of each stage. They can't move through the platforms or walls but other than that their movement is unrestricted. Which makes them a pain in the you-know-what.

Chack'n has a slightly surprising way of dealing with the infernal Monstas too - he throws bombs! He can throw them to his left or right with a button assigned to each direction so it doesn't matter which way he's facing. They take a few seconds to explode as well which is fortunate since he'll lose a life if caught in the ensuing explosion! Luckily, so will the Monstas who can be killed as 'adults' or while in their eggs, although I think Taito considers the latter cheating as you'll miss out on a bonus at the end of the stage if you do that. Chack'n also has to bomb the heart cages to 'free' the heart which then floats to the top-right of the screen where it (or they) can be collected to finish the stage. On the top-left of the stage, however, is a Mighta (also later seen in Bubble Bobble) who's slowly pushing a barrier towards the right of the screen. If he gets there, time's up!

That's about all there is to Chack'n Pop. There's no power-ups or collectables aside from an occasional fruit for bonus points, and there's no new enemies - it's Monstas from the first stage until the last. Some later stages have moving platforms and there's some breakable walls, but the only other feature of note is the water bottles that hang from the ceilings of some stages. These, once bombed, will release a stream of water that gradually floods the stage. Luckily, Chack'n can swim so this can actually be helpful as it allows him to reach some otherwise inaccessible areas. It's a tricky game though with some fiendishly-designed stages. If you're anything like me, you won't have a clue what you're doing when you first play Chack'n Pop and probably won't last long, but after you've learnt how to control Chack'n properly and practised throwing a few bombs around, it turns out to be a pretty addictive and fun game.

It's rather old now though of course, but it's not a bad looking game for its age. There's no in-game music with just a few basic effects and some ditties between stages and the backgrounds are all black, but the foreground graphics are quite colourful and the sprites are quite appealing, especially Chack'n himself (who I've just noticed is upside-down in every shot here!). He's made a few guest appearances in other Taito games over the years so I guess they're fond of him too. His game is a pretty unusual one which is a kind of mixture of Bubble Bobble and Bomberman. The similarities with the former should be obvious but the timed bombs and attempts to trap enemies are certainly reminiscent of the latter and the combination proves to be rather enjoyable, for me at least, and as long as you don't go in expecting another Bubble Bobble, you should find it just as enjoyable.