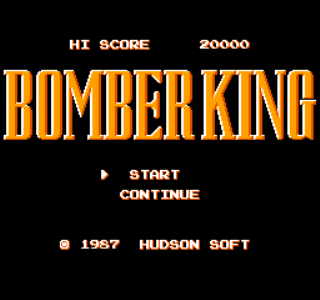 Well, the splendid Bomberman series is coming along nicely so far but I'll take a short diversion here and look at one of the spin-offs, and like many such obscure Japanese spin-offs, it's one that was released in the West under an entirely different guise. This is understandable, however, since the series was only just becoming established in the US and Europe and this game is indeed a markedly different affair, in both looks and gameplay. The first change you'll notice in the game that became RoboWarrior for the NES is that it doesn't actually feature Bomberman at all, or at least, not as we've seen him before. It actually features a... robo warrior, funnily enough, whose job it is to blast his way through each stage in a familiar fashion. These stages, however, are much larger than those found in the usual Bomberman games and there's a few more unfamiliar features here too. 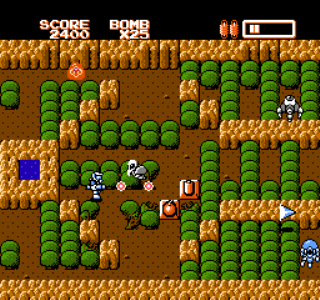 I don't know about Bomber King itself but RoboWarrior is set on an artificial planet called Altile which has been invaded by the Xantho Empire who have shut down its weather-control system, turning it into a barren wasteland. RoboWarrior, a cyborg called ZED (Z-type Earth Defence), has been sent to find and destroy the Xantho leader, Xur. The game world is divided into eight levels, called 'periods', and each of these is split into between one and four left-to-right scrolling stages which are filled with a familiar mix of 'soft' destructible blocks and 'hard' indestructible blocks. The stages are laid out a little more realistically than normal though with the soft blocks mostly taking the form of apparently natural obstructions like bushes or rocks, and there are lots of passageways and open spaces too. The object nonetheless remains to find the exit which is generally the opposite end of the stage to which you started, shockingly. 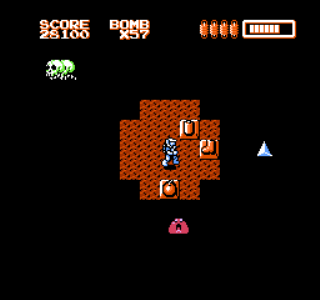 This time, you don't have to destroy all the enemies on each stage to open the exit but must instead find the key. This is fortunate since the number of enemies is vast and apparently infinite! They seem to include a mixture of robotic creations and more natural (but no less aggressive) creatures. Some of them are ground-based and are therefore just as restricted by the soft blocks as ZED. These ones just pootle around doing their thing until you get close to them while others can fly over the stages unrestricted. Some examples of both types can fire at you too and contact with these projectiles, or indeed the enemies themselves, will reduce ZED's power levels. Although the levels will gradually fall anyway as a kind-of time limit (much like Gauntlet), taking hits will obviously deplete them much quicker! Luckily ZED is also equipped with a laser of his own. It's initially very short range but one of the many power-ups can rectify that problem. 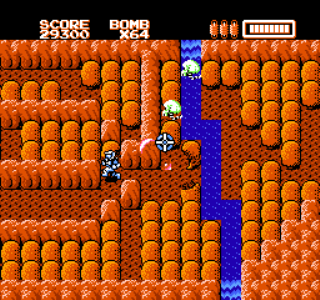 One big difference between this game and a normal Bomberman game is that ZED has a finite supply of bombs. Some enemies take more laser shots to defeat than others but all of them will leave behind a icon that increases your bomb stocks by one. All other power-ups are found beneath destroyed soft blocks and there are quite a few. These can include the usuals like more extra bombs, extra energy, speed ups, temporary shields, stars for bonus points, and the aforementioned laser power-up. More specialised collectables include candles and lamps which provide illumination in the darkened underground areas that you'll occasionally encounter and a Life Vest which allows ZED to float over harmful water areas for a limited period, as well as some extra weapons in the form of a four-way shot, missiles, and a Megaton Bomb which has the effect of a smart-bomb, destroying all soft blocks on screen. You can also collect 'medals' which act as currency in the (rather over-priced) shop that appears between stages). 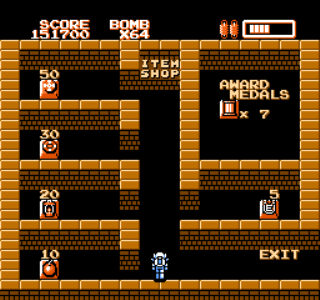 These items are all useful of course, but there are some that you actually need to collect to finish a stage. Until then, some stages will just loop forever which makes an already-difficult game even harder! There are several other things that make Bomber King a rather tricky affair too. It is possible to gradually 'level up' ZED and, although he only has one life, he does start the game with four Life Pods (which look like batteries, which they could quite feasibly be) and these each refill his energy-meter once. In spite of this, being caught in the explosion of one of your own bombs will kill you instantly regardless of how many 'life pods' you have, and this brings me to what for me is by far the game's biggest flaw - unlike even the earliest Bomberman games, the placement of the bombs here is not hugely accurate and can frequently result in unfair deaths. 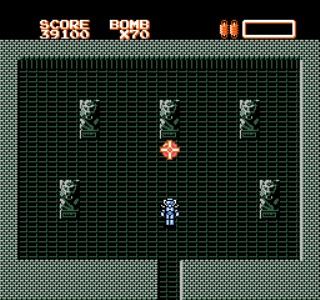 This annoying oversight (at least, I'm assuming it was unintentional) was bypassed on my part to some extent by using saves via emulation but it was still a frustrating experience, so I imagine playing it 'in the flesh', so to speak, would be a teeth-ghashing experience, especially as bombs have a much shorter 'fuse' than they do in normal Bomberman games meaning you have less time to escape the blast - get caught on the scenery or hesitate for a split-second and you're toast. It's possible to counter the effect somewhat by over-emphasising the bombs intended destination by holding that direction on the controller while laying it but this only really works if you have something to 'push' against. Even so, it's quite inexplicable that a play-mechanic as critical as this one was messed up! Aside from this, Bomber King is a rather pleasant game too, so I'd like to meet the cretin responsible!

One thing I like a lot is the music which is upbeat and catchy and the sound effects are pretty good too except for a super-annoying (and loud) beeping alarm when you're on your last life pod. The graphics are well drawn and fairly detailed - the various stages have different soft blocks as usual and the sprites are mostly a good mixture of evil cybernetic or robotic monsters and scary organic creatures. One kind of enemy can create or turn into soft blocks but they also sometimes turn into a super-annoying flying thing that immediately homes in on you and inflicts multiple hits before flying away again so you'll need to get a missile ready for these buffoons! Despite the addition of open spaces here, ZED can still only walk and shoot in four directions but the stages are mostly very well designed with the hard blocks, soft blocks, and open spaces often arranged in such a way as to provide several possible routes through sections. 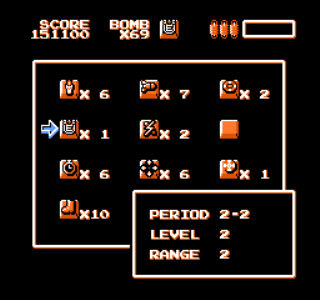 The fact remains, however, that despite the initially good first impressions and the enjoyment that I did manage to get out of this game, I ultimately found it to be a mostly frustrating and annoying game - not even bullet-hell shoot 'em ups have caused as many 'load states' as this game did! What a shame, it's really nice apart from this major flaw and could've been a fantastic game. Going through the same sections over and over again indicated that the enemy behaviour is random, for example. Reloads often saw them doing different things or even different enemies being on the next part of the stage or something. Stuff like this could've made it a splendid and addictive game. It is bloody hard though, so much so that I tried switching to RoboWarrior to try and get some screenshots and I immediately noticed that it's easier - self-bombing doesn't instantly kill you for one thing! 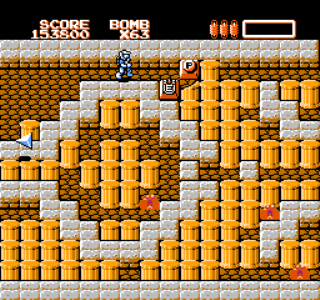 I'd be surprised if the Japanese version of this game was actually designed as a Bomberman game from the off though. The end result has many similarities as I'm sure you can see for yourself but it just doesn't have the feel of his heroic adventures. It feels more like... well, RoboWarrior, and it's this version of the game I would recommend far more enthusiastically than I would the Bomberman-themed version. Whatever it was originally intended to be, the same problems do exist in both versions but RoboWarrior is a noticeably easier game and therefore more enjoyable and less frustrating. It's Bomber King I'm reviewing though so the final score will reflect that (I guess you could give the US version another point or two) and it's very annoying that it's been messed up. I'm confident it would be a hugely enjoyable game were it not for its rather sizeable problems.