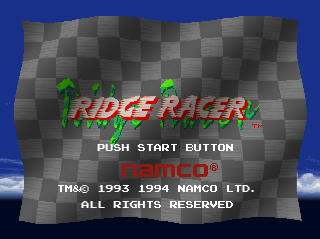 Okay, maybe there's some slight exaggeration there, but it's true to some extent - at least as far as some games are concerned, particularly the ones that don't receive much in the way of, shall we say, supplementary material. That, unfortunately, is where this port of Ridge Racer falls down. Of chief concern is the number of courses on offer here: one. Okay, it's a fairly good course, and a reasonably large one, but even for an arcade game one course just doesn't cut it for me. Some fans of this game defend its appalling number of courses by claiming that Namco had a very short amount of time to develop it, being under a lot of pressure to rush it out in time for the PlayStation's launch. This may be true, but I don't think it's the real reason - Ridge Racer Revolution - the sequel to this game, is not a significant improvement after all, and Namco had plenty of time to get things right there.

As mentioned though, the sole course is more than half decent in itself. It is quite a large one and takes you from the city over bridges and through tunnels past such views as a construction site, mountainsides and a beach. Before racing on it, you must choose a car, and there are four available. Actually, one nice feature of this conversion is that you can play a single-screen version of Galaxians while it is loading. If you manage to shoot all the aliens before the game loads, the quota of available cars is trebled. Regardless of how many cars you can initially choose from though (all of which are fictional), each has differing attributes - acceleration, traction, handling and top speed all vary from vehicle to vehicle, and the usual manual or automatic transmission can be selected. There are no play modes to choose from - it's an arcade mode or nothing - so with the car selected it's onto the race.

These begin with a leggy girlie walking across the track for no real reason other than to look nice, after which you'll find yourself at the back of the grid (grrr!) with eleven computer controlled opponents in front of you. The 'course select' option on the pre-race screen actually lets you choose between two difficulty levels which determines the number of laps (two or three respectively) and the top speed of the other cars. You can also choose between the same two versions of a 'different' course which is actually just the normal course but with a small, more challenging (and rather crap) section added to it, and later on some races can also be contested over mirrored, reversed, or night versions of the course. In the last race, you'll have the opportunity to race the mysterious black 'Devil Car' which is the fastest in the game. Beat it and you'll have completed the game as well as having gained access to the black car yourself. The only other option left is the time trial where you can try and beat the best lap times for the course in its various configurations.

The biggest orgasms Ridge Racer fans, and indeed the first of the PlayStation fanboys were having about this game is down to its graphics, and they are indeed quite impressive for such an early title. Aside from a slight reduction in background detail and polygon count, it's close to arcade perfect. A helicopter follows your car around as you race and afterwards you can watch a replay of your hopefully splendid performance as seen from the helicopter. Races start at different times of the day like sunrise, midday or dusk, so some nice lighting effects and colours can be seen throughout, and the cars look nice, though they can't be damaged. The in-game view can be switched between a front bumper mounted camera and a behind car camera. The 'techno' music selected for the game will probably be awesome or terrible, depending on your taste. It consists of six 'bangin choons' which you can choose from before racing, although most of them make me sad.

Even if, unlike me, you like this kind of music though, I suspect though they will begin to grate after a while, but the composer obviously thinks highly of them as there’s a 'music player' on the option screen which shows cars racing around while the music of your choice plays. Luckily, they are not mandatory - in a fairly innovative feature, you can put your own CD's in your PS and listen to them instead! Sounds effects are quite poor, including an awful engine sound (lawn mower?), and unfortunately an annoying commentator rambles on throughout each race too saying the same stuff all the time such as "Wow, what a start!" regardless of whether you made a good start or not! Making a good start isn't easy either. The handling style of the cars has obviously been retained from the arcade version, which is a good thing for an arcade conversion I guess, but I've always found the cars incredibly annoying to drive.

The main problem is a bit hard to explain but when grip is lost the car will most often start pivoting left and right around a central point of the car until your speed decreases substantially and you can start accelerating away again. It's ridiculous, annoying, and completely unrealistic. Yes I know this is an arcade racer and realism is not the order of the day here, but some sort of basis in reality wouldn't go amiss, I deem. Another annoying aspect of gameplay is that contact with other cars or the side of the course, even if it's slight, results in a severe reduction in speed, and once you've hit one once, particularly as far as the roadside barriers are concerned, it's very easy to keep bumping them, thereby ruining any chance of a decent finish. This obviously gets very annoying after a short time. Having said that, the challenge on offer here isn't really befitting a game with one course - you’ll win the first race within your first three attempts to very little fanfare.

Those (fairly major) points aside, however, Ridge Racer, as limited as it is, can be fairly enjoyable for a day or two before it gets boring. The main course is quite pleasant (although the 'extra' bit sucks - it just has grey walls all along it) and there are lots of nice touches such as homages to other Namco games, there's just not enough to it. Of course, a two-player split screen mode would help matters, but even that is absent! As an arcade game, Ridge Racer was thrilling for a one-off (or occasional repeat) play, but as a home game it just doesn't work without a radical overhaul which it has not received here. There really is very little to return to after the first few days - the desire to improve lap times is something that prolongs the lifespan of most driving games, but when that game only has one course, it's not nearly as attractive a proposition.

When this first came out, it understandably had a big 'wow' factor - after MegaDrive and SNES racing games, it was a genuinely impressive sight and a great demonstration of what the next generation of consoles had in store for us, but it didn't take long before there were a good few decent alternatives - Gran Turismo, Colin McRae, Total Drivin', Test Drive 4 & 5, TOCA Touring Cars, Porsche Challenge, Need For Speed and many others are much more enjoyable driving games and much more worthy of your time. It's a shame too, there was real potential here. If Namco added just a few more courses, this could've been a half-decent game. If they tinkered with the car-handling, it could've been even better. Later games in the Ridge Racer series showed what was possible on the PlayStation - the stupidly-named Ridge Racer Type 4 has eight courses and a two-player mode, for example, and is a great racing game. This original is not.