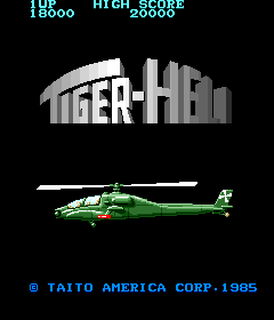 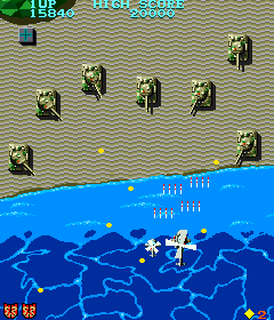 Although Flying Shark was the first game of this type that I played, Tiger Heli was probably the first to exist and it arrived in 1985 courtesy of Toaplan (despite what the title screen says). The rather vague story mentions some sort of war-crazed nation wreaking havoc, which can of course only be stopped by the amazing, revolutionary chopper of the title which is "the ultimate stealth helicopter, turbine powered, forged from ebony metal and glistening chrome" according to the blurb, but however wonderful it might've been in trials, it's barely adequate to take on the might of this unidentified army (I'd guess Russian, what with the abundance of tanks). Fortunately there are only four distinct stages to battle though. 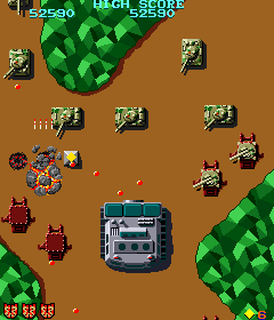 These are not individually themed or anything, though, and there are no end-of-stage bosses - the chopper simply lands after a while, presumably to refuel, then takes off to continue, so the game plays kind of like one long, endless stage. Indeed, even if you complete the fourth stage the game just loops back to the second and carries on! The scenery consists of the usual stuff found in this type of game - a village with roads and a few houses here and there, fields, beaches, wooded areas, dockside, and watery sections. It all seems quite varied to start with but there's a fair bit of repetition after a while. The enemies that fill these areas aren't much more varied either but are very numerous! 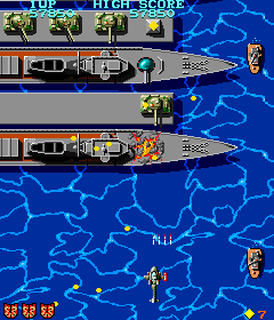 There are occasional aircraft (a majority of them are found immobile on the deck) and a good few fixed gun emplacements, but the enemy forces are almost solely comprised of tanks - hundreds of them, mostly of the same design except for the watery sections which obviously feature floating equivalents, and they trundle (or float) onto the screen from all sides. The only break from this routine, if you can call it a 'break', is when a larger tank arrives which fires off many more shots and takes a lot more punishment. At first only one appears but later they appear in pairs and, since the stages continue scrolling while they're about, you'll also have to contend with the normal tanks too. Which is very helpful. 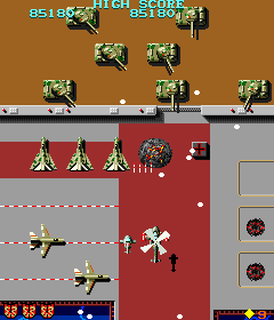 The chopper itself, which appears much less green in-game than it does on the title screen, has two forms of attack - rockets, which are infinite, and bombs, which are not. Sadly, the former, whilst firing in fours, don't move particularly quickly and only cover about half the height of the screen, and the latter aren't massively useful either. Like most smart bombs, they do remove all on-screen bullets as well as destroying any nearby enemies, but if you save them for an emergency when you're about to die, you'll probably die anyway as they take a second or so to deploy by which time the bullet you were scared of has probably reduced your craft to flaming wreckage for the umpteenth time. 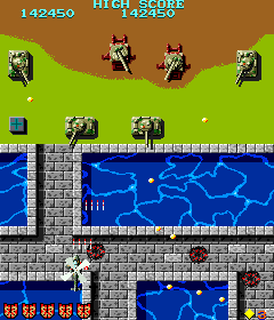 Surprisingly, however, Tiger Heli also features what must surely be the first appearance of the 'auto bomb' feature which sees a bomb used automatically if you're about to take a hit (assuming you have any bombs, of course). The trouble is, it's not very reliable and only seems to work sometimes. The only assistance you receive really comes in the form of boxes which appear on the ground now and then. Shooting ones marked with a glowy diamond will increase your bonus counter by one but the ones marked with a cross are more helpful. The colour of the cross alternates between red, white, and blue. Shooting it while it's blue will release a floaty 'B' icon which gives you another slightly useful bomb. 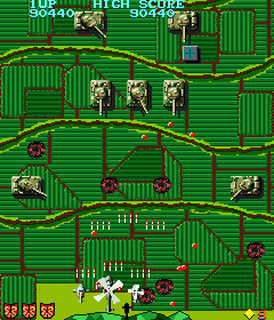 The other two colours offered by the cross will give you either a side-firing or forward-firing support heli respectively. Although just as fragile as your own chopper, they are pretty helpful while you've got them, but they don't provide enough help to make it all the way through this game. Not on one credit, anyway! The main problem I encountered when playing through it was the slow movement of the chopper (which can't be improved) as well as the limited range of its rockets. The many tanks start firing their bullets the second they enter the play-area and some of them move faster than your own which, when combined with your permanently sluggish craft, equals many, many lives lost. 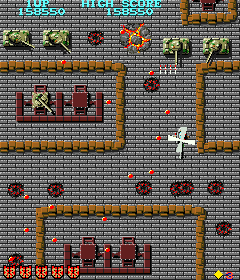 I suppose most shmups were pretty tough back then though, largely due to the hardware limitations, and this one isn't really any worse than some others I've played - the large mid-boss tanks are definitely the biggest challenge for me but aside from those there isn't any stupidly unfair sections or anything, and it should be possible to get at least a reasonable way into the game with practise. Graphically things aren't bad for the day - there are very few different types of sprite and most of the background themes are repeated now and then, but it's a colourful game and the detail is quite good (the explosions are decent and you can even see the bombs on the sides of your heli). It's the same sort of thing with the audio - there are only a few different tunes used including a nice stage theme which switches to a more upbeat, albeit more repetitive example while you've got a support heli. It's all reasonable enough stuff, all things considered, and results in the kind of game you'll probably revisit every now and then for a quick ten minute blast to try for a new high score, but probably nothing beyond that. Quite often the originals are still the best but Tiger Heli has been made largely irrelevant by some of the many similar examples that came later.