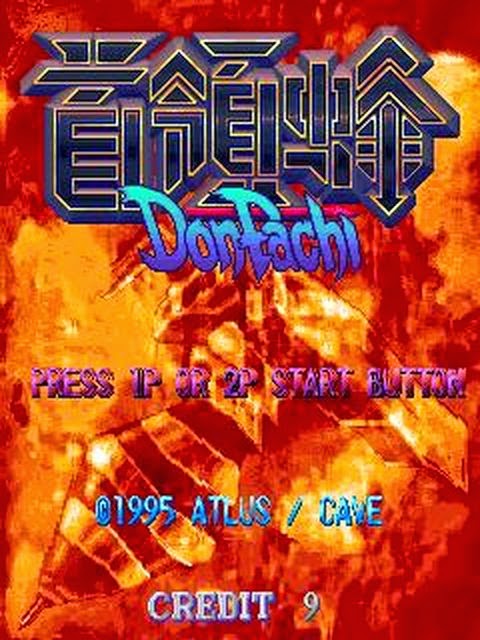 I've now reviewed quite a few shmups over the years here at Red Parsley. Some of them have been very famous, others less so, and there are obviously tons of them I still have to visit at some point too. One whose name I probably hear more often than any other, though, is DonPachi. Actually, that's only almost true; it's usually DoDonPachi, this game's much revered sequel, that gamers rave on about, but as usual I prefer to look at the series in the right order. One thing I found myself wondering, however, was this: do all the ever-passionate shmup fanatics only seem to mention the sequel because this first game isn't much cop? To be honest, I doubted that before I even played - Cave are practically worshipped by most shmup fans after all - but I was still very interested to find out. 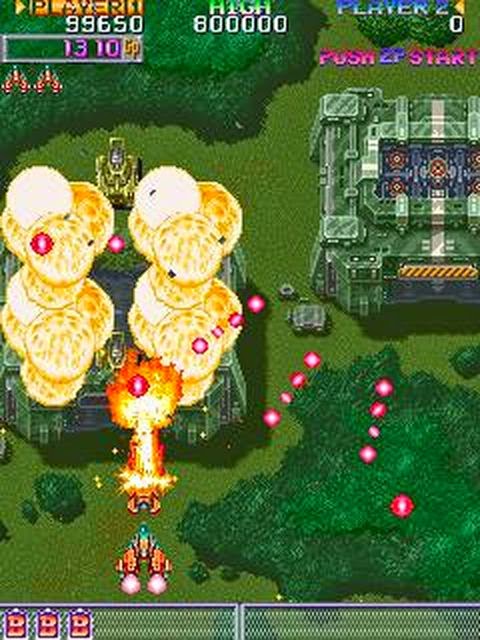 Sadly, the back-story didn't do much to hype me up. Apparently the game takes the form of a training mission for new pilots with all the enemies consisting of your comrades who are prepared to sacrifice themselves to ensure only the finest pilots make the grade. There is little here to motivate me so I'll instead assume the scenario is the same as usual - all enemies are terrible evil-doers and only I (and a friend) can avenge the loss of countless beautiful, innocent lives, including perhaps my very own family. Or something. Hmm, anyway, regardless of whether you like the story, you get a choice of three brave pilots to play as and each has their own unique craft - Types A and C are jet fighters with forward-firing and three-way shots respectively while Type B is a helicopter with a forward shot and rotating side guns. 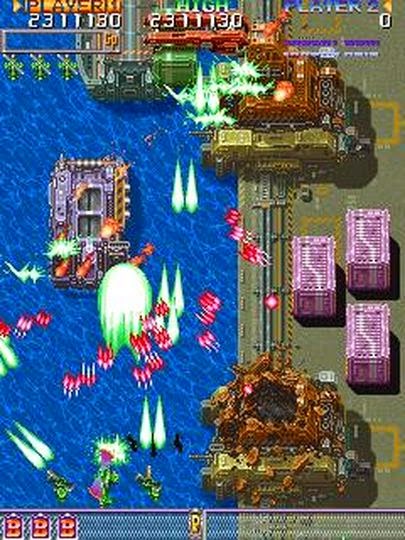 Interestingly, their guns can be used in two ways. Rapidly pressing the fire button will send forth volleys of normal bullets as you might expect, but if you hold down the fire button the guns will fire a more powerful concentrated laser blast directly forwards. Either type of shot can be used without restriction but the laser blast slows down the movement of your craft considerably. This affects the Type C craft more than the other two as, thanks to its wider range shots, it's also the slowest craft by some margin which makes it positively glacial when at full blast. Each craft is also equipped with bombs which can also be used in one of two ways. As well as causing screen-wide destruction like most shmup bombs, you can also use one while firing your gun which unleashes an immense forward blast instead. 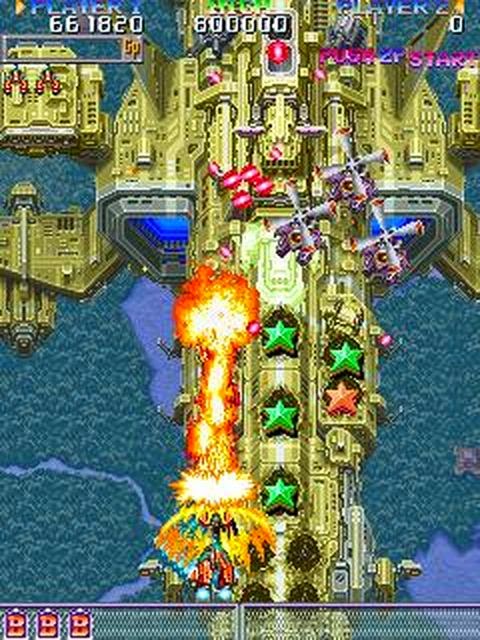 There are a few ways to wreak the required levels of havoc then, and each craft is more than capable of marauding through the five vertically-scrolling stages too. They can all be powered-up to very satisfying levels, with collectibles including 'P' icons, two of which will increase bullet and laser strength/size by one level, and your stockpile of bombs can also be replenished. For bonus points there are also golden bees, which are hidden, only revealed by heavy weapon fire, as well as more common golden stars which appear in the ruins of some ground-based enemies. As well as collecting these, your score can also be significantly boosted by 'chaining' enemies, or destroying many in quick succession, raising the 'combo' level as you go, which makes DonPachi very much a score-oriented game. 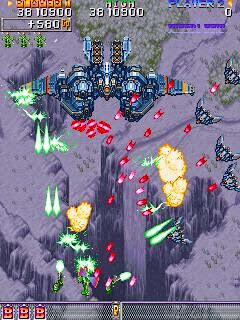 There are more than enough enemies around to contribute to this but, while they may have strength in numbers, they are rather lacking in originality. They include masses of tanks, gun batteries, and boats of various shapes and sizes on the ground/water, with choppers and planes of many types buzzing around overhead or looming menacingly over the landscape. All the usual stuff, in other words. Despite their differing size and power, there are only bosses at the ends of each stage, but they make up for that by unquestionably being the toughest parts of the game. Okay, maybe not the first one which even I can put down without losing a life, but the rest of them are rock! This is, unsurprisingly, purely down to the large number of colourful bullets they pump in your direction in typical 'bullet-hell' fashion. 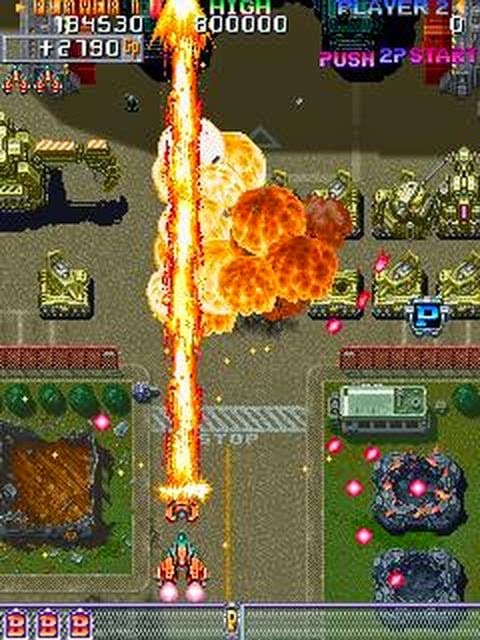 Whilst maybe not reaching the ridiculous levels of some later games, the intensity of the enemy fire is still sufficient to cause problems. There's even a bit of slow-down on occasion! The stages leading up to these confrontations are generally fairly manageable for a game of this type though. Some larger enemies spew forth impressive numbers of bullets while other smaller examples zip around very fast. This means, despite the slightly tame-looking screenshots, the screen is constantly busy and you really can't stay still for a second, but when you lose a life your power-ups are released, allowing you to re-collect them, and you'll continue on from the point you died too, which is really helpful. Graphically though, as mentioned already, things are far from original here which was a little disappointing. 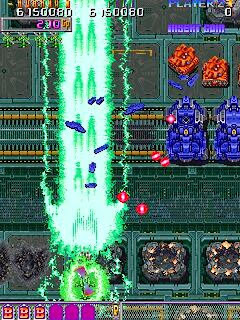 The enemies are mostly fairly generic and the stage back-drops largely consist of all the usual stuff too, including grassy/wooded areas, watery docks areas, flights though cloud tops, and of course fortified enemy bases - but it all still looks pretty decent and the pyrotechnics are superb, especially the weapons of your own craft(s). The audio is also very good and includes some enthusiastic voice acting, solid effects (including a great shooting noise), and some loud and enjoyable synth music, which all help create a nice atmosphere. The difficulty curve is a little uneven - it's easy enough (for bullet-hell standards) until the fourth stage, but then super tough - but this is still the kind of game where you're immediately convinced you can do better next time, and sure enough it's highly addictive too; one of the most addictive shmups I've played, in fact. It's not perfect then but, aside from the uninspiring backstory and overly familiar graphics, DonPachi is probably the best shmup of its type that I've played so far, and even better than I was expecting. I'm sure Cave's later games surpass it in all regards but, considering this was their first game, it's pretty darn impressive.