The number '68000' is probably one that means a lot to many retro gamers. It is after all the designation of the processor made by Motorola that's found in many fine 16-bit systems such as the Atari ST, Commodore Amiga, Sega MegaDrive, and SNK's mighty Neo Geo, but there are also a few lesser-known systems powered by it as well. One of them is the Super A'Can which is made by a company called Funtech.

It's not tremendously surprising if you haven't heard of Funtech as they're a Taiwanese company who were responsible for little of note prior to entering the gaming world, and accordingly, their strangely-named system was released only in their native territory. A strange decision, you might think - gaining a foothold in the console hardware market has always been extremely tough for a newcomer to begin with, never mind if said newcomer restricts themselves to such a limited audience. How in the blue blazes did they ever expect to attract any big name publishers to their system? It was also released rather late for a cartridge-based, 68000-powered system - 1995, no less - by which time the PlayStation and Saturn were striding forth, laying waste to all such systems with their fancy 3D graphics and CD-ROM games. It didn't stand a chance did it? I'd say not and indeed, it wasn't with us for long.

It was around so briefly, in fact, that only 12 games were ever released for it. These included a few RPG's, a couple of puzzle and sports games, platformers, a fighting game, a Bomberman clone, and of course, a mahjong game. Owing to the short-lived nature of the system as well as its meagre selection of games, however, everything to bear the Super A'Can name is now rare and therefore rather expensive.

The obscurity of the system as well as its 68000-ish nature meant I was more than a little intrigued by it and eager to discover more, but, due to its expense, I won't pretend this feature comes after actually using the system 'in the flesh' so to speak. I therefore had to rely on emulation, and it's here I ran into problems - for some reason, it seems to be rather difficult to emulate. Few games are anywhere near authentic (none have sound, for example) and some don't work at all, so here is as best an 'exploration' as I'm able to offer for this unusual system (for now). 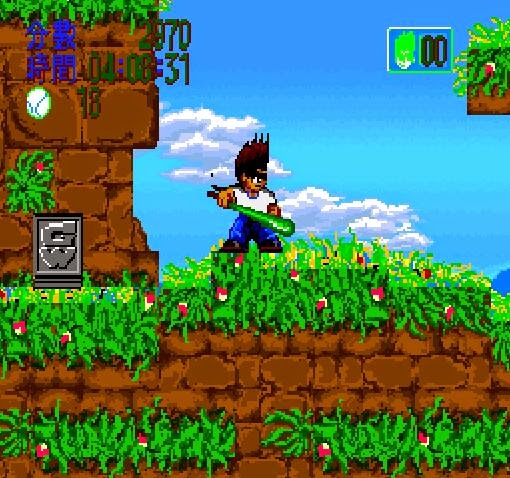 So, my very first look at the Super A'Can is courtesy of Yinsu Feilong which received the honour thanks largely to its (translated) name of Speedy Dragon. I'm unsure why it was given such a name though, as it apparently has a baseball theme, with nary a dragon in sight, speedy or otherwise. Anyway, it's a side-scrolling platformer very much in the vein of the early Sonic games. In other words, you travel from left to right avoiding or killing enemies (using a baseball bat, obviously) and collecting bonus stuff (such as baseballs) as you go. The graphics are bright and chunky (although the tiled nature of the foregrounds stands out too much) and it doesn't seem a bad game in some ways - the controls aren't too bad and our hero moves very quickly, but a sizeable problem stems from the zoomed-in view of the action which means you can't really see where you're going, especially when running at full pelt which is definitely not recommended until you know the stages well. An interesting game to play, particularly for baseball fans (it's impressive that AV Artisan Corp even managed to make a baseball-themed platformer!) but prolonged play will result in much frustration. 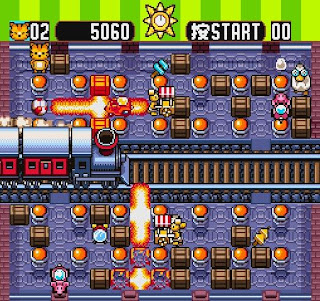 While I was very pleased to find a platform game amidst the Super A'Can's meagre library, I was even more excited to find this game. Boom Zoo, you see, is a nothing more than a total Bomberman rip-off, and anyone who's visited Red Parsley before must know how much I love that series! You get to choose between a panda, pig, tiger, or bear (who have just been bombed by a wolf in the bed they apparently share) but apart from that it literally is a Bomberman game. You therefore need to work your way through each of the maze-like stages, blowing up all the enemies and grabbing power-ups from behind the soft (destructible) blocks, which include all the usuals - extra bombs, range extend, bomb-kick, remote bombs, etc - as well as a key needed to finish the stage. After five stages there's a boss, then it's on to the next set of stages. It really is such a blatant rip-off I'm sure Funtech would've been hearing from a Hudson Soft lawyer had the Super A'Can been more successful, but it's also great. The graphics are colourful, varied, and cute, the controls are simple and responsive, and the whole thing is supremely playable and fantastic fun. I'll be amazed if there's a better game on the ill-fated console than this. 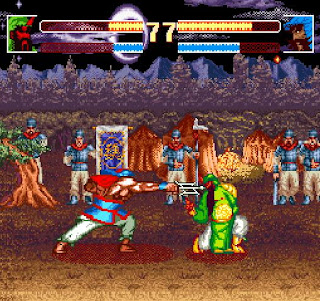 Another different genre, this time a one-on-one fighting game, and it's an unusual title for Super A'Can standards in that it was released on other systems too. It's actually set almost 2,000 years ago in the Three Kingdoms period of Chinese history and features twelve brave fighters befitting that time, all of whom are male and all of whom you can play as too. Once you've chosen one, the computer will then select a random opponent for itself and... proceed to kick ten barrels of crap out of you! Well, that may actually depends on who you're fighting as and who you're against as the characters I tried are not particularly balanced. My first few fights saw the computer-controlled fighters beat me with successive perfects, but then I chose another fighter and did exactly the same thing back, for example. These issues aside, however, it seems to be a fairly standard Street Fighter II clone and includes the usual swooshy, flippy special moves and throws, and that means it's pretty good for two players. I quickly got annoyed with it by myself, though, and the graphics are also rather messy for my tastes as well. Still, it's undoubtedly the best fighting game on the Super A'Can! 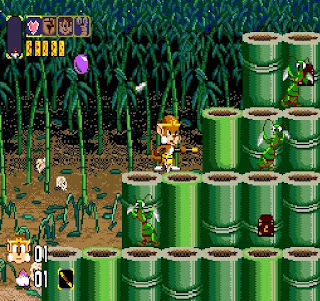 After a couple of failed attempts at playing other games I arrived at this one and quickly found that it features a monkey which means it's automatically cool. This simian reminded me of SonSon and, like that knuckle-dragger, is the hero of his own platform game. Lord only knows what the back-story to his adventure is but it's a pretty standard (for 68000 days) offering. There are some tricky jumps right from the off, too, and the game soon reveals itself to be unusually tough for a cutesy animal-based example. As well as the jumps and traps, our hero's attacks (initially a Blanka-style electrocution thing, then a stick) are very short-range and result in much lost energy, particularly as the collision-detection doesn't seem great either. Oh well, the graphics are really nice anyway, featuring nice sprites and superb backgrounds, and progress is assisted by the many treasure chests that are dotted around the landscape with more energy and other items, and I did end up getting through a few stages of scrolling action. Despite its difficulty I still enjoyed this more than Speedy Dragon too. 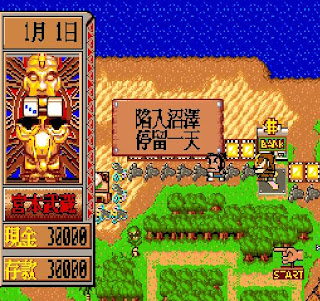 Sadly, my attempts to test out the Super A'Can's games weren't all as successful as above. Others I tried included (to use their translated names) Monopoly: Adventure in Africa (pictured) which is meant to be a puzzle game but is actually so text-heavy (including the regular choice between multiple options) that I had no idea what I was doing and didn't get anywhere, and then there were Super Taiwanese Baseball League, Magical Pool, and The Son of Evil (an RPG), none of which worked at all, and lastly, Gambling Lord which is a mahjong game that I didn't even try (as I'm not very interested in mahjong). So, the few Super A'Can games that exist are apparently not very easy to emulate, and given the somewhat obscure nature of the system as well as the very limited software library available for it, it's not likely that we'll see that improved any time soon. Based on the evidence so far, I'm not sure if that's good or bad (chortle)!

Verdict:
To be honest, it’s really hard to know what to make of the Super A'Can. As a 68000-powered beast it's already at least potentially awesome, and its graphical abilities seem... well, pretty good, though not as impressive as the MegaDrive's (also 68000-powered), so if it were a globally released and supported system it might've possibly had a fair chance of success (although it's not easy to even gauge its abilities with no top development teams working on software for it). It's not the system's technical abilities that vex me, however. My confusion mainly stems from an inability to work out precisely what Funtech were trying to achieve with their console.

At that time, any newcomer to the console market was going to have a very tough time breaking in, with Sega and Nintendo dominating and NEC maintaining a decent presence in Japan (as well as with fans worldwide who enthusiastically imported all the latest releases), with the 3DO and Atari's Jaguar also toiling away, and a little company called Sony were just launching their first console as well. What hope did a little Taiwanese company have, especially when they weren't launching their system anywhere but Taiwan, and didn't have a single recognised developer on board?

The answer to that didn't require too much thought - they had no hope at all, of making their console a success. That's assuming it was even their goal to challenge the higher powers of course, but I can't think why a company would spend lord knows how much money developing and releasing something without wanting it to succeed. Well, it didn't anyway, which really isn't surprising, and it left behind only an obscure curio to be toyed with and puzzled over by us bewildered oafs over the coming years. Give it a try by all means, as I did, but don't expect too much.

Gameplay Video: Check out this video (not made by me - credit to original YouTube uploader) which shows, in what I hope is a purposely ironic title, the 10 games that 'defined the Super A'Can'. In other words, almost all of the games that were released for it!