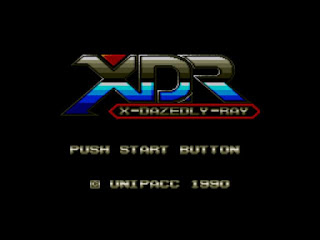 Most of the titles I've looked at in the 'Crap Games' feature have so far been ones I remember getting slated in magazines of the day, but this latest instalment is different. I have only vague memories of it from back then - possibly because it was only released in Japan - but as I recall its arrival was met with neither adulation nor disdain. It was seen as pretty average in other words. Lately, however, I've been hearing much more about it, specifically from a friend named David who loves shmups so much he even renamed himself after one of his favourite series', Darius. The reason he talks about XDR so much is because he harbours a pure, unmitigated hatred towards what he considers the very worst shmup ever made in the history of the world. Prior to this review I had never played the game but I have been very curious for a while now as to whether it really is that bad. 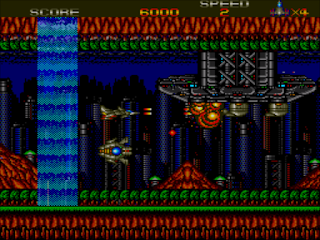 First impressions aren't too great I must say. The writing on the title and options screens seems rather blurry (whether intentionally so or not I couldn't say) and the visuals seem rather basic, but I guess I'm getting ahead of myself a bit here. Before that, the story, which is the same old parp as usual. The action is set on a planet known as Sephiroth upon which resides a peaceful, prosperous civilisation, but their utopia is shattered when an evil warmonger known only as Guardia, a former resident banished from the planet, returns with an entire army in tow. Only you in the advanced fighter known as the X-Dazedly-Ray can hope to put an end to the destruction and send Guardia packing. Or blah, blah, blah, in other words. I guess I can't really hold this against XDR though, as few shmups have anything resembling an original, inspiring plot, and this one is as good or bad as any other. 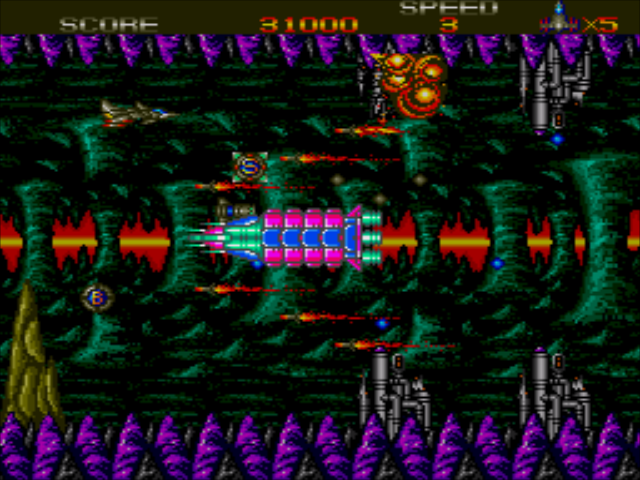 The mission to take down Guardia is made up of six short horizontally scrolling stages. Your ship comes equipped with a weedy twin shot, adjustable speed, and little else, though there are of course several power-ups to look out for. These include a temporary shield, extra lives, drones/options, missiles, and three main weapons - Vulcan (the default), Laser, or Wave Shot, all of which can be powered up. So far everything seems pretty normal then - not particularly good and certainly not original, but not that bad either. It probably even looks reasonably good from the screenshots here. While clearly not in Thunder Force territory, technically, there are definitely some good points and I found the style oddly appealing in a way. I think it kind of reminds me of a Master System game (albeit a high-end one) in some ways. The choice of colours is a bit strange though - just look at the ghastly fifth stage (last screenshot). 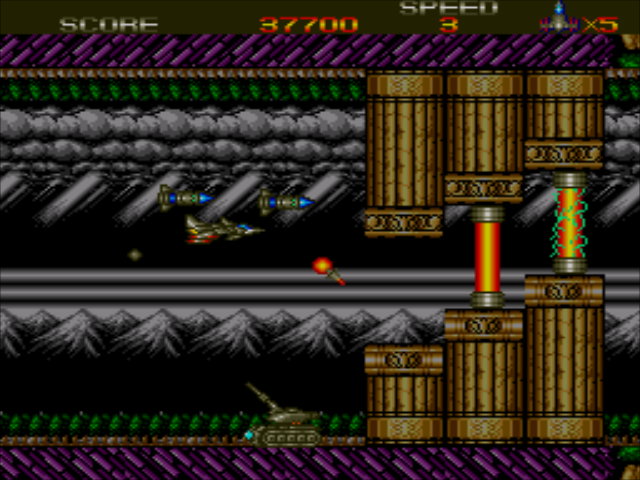 Indeed, it's certainly not likely that you would confuse one stage with another. Each of them is themed and named thus: Skies of planet Sephiroth, Guardian Military Secret Base, Ancient Ruins of Sephiroth, Green Moon, Space Area Jeriad, and the Guardia Military Star Base. Most feature obstacles and large chunks of scenery to steer around, many of which are festooned with gun turrets and stuff, and as their names might suggest, they are pretty varied too. That's always a good thing, but unfortunately they are also quite poor, consisting of basic designs repeated over and over. The sprites are a bit better but not great either. There aren't many different types, they aren't animated well, and most of them aren't very interesting designs, although the bosses don't look bad, at least in static screenshots. Most are pretty darn big, in fact. The stages scroll quite smoothly too, though far less so on the layers of parallax. 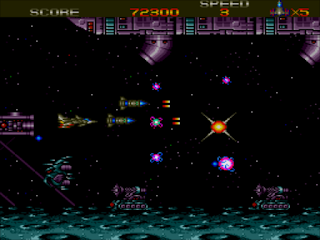 Little better than the graphics is the audio. It sounds a bit muffled and the music is of variable quality while effects are quite poor. This is a bit of a shame too - I don't think some developers realise how much decent audio can do for a game. Nonetheless, I probably could have lived with that as well as the sub-par graphics if the game played nicely, and to start with I thought I might even like it - the cityscape and Gradius-esque mountains of the first stage, while technically unimpressive, held a certain charm as well, and for a brief time it looked like being a rather basic shmup, but possibly an oddly enjoyable one too. It didn't take long for things to go downhill though, thanks to a variety of gameplay issues which quickly took their toll, and I soon found that the more time I spent playing it the less I enjoyed it thanks to things like your ship movement which can occasionally be jerky and glitchy. 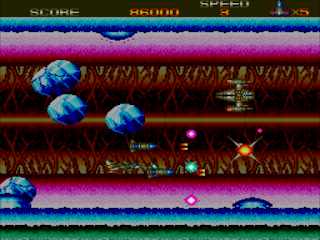 It even flickers now and then too, which can make it easy to lose track of it. The collision-detection is also more than a little suspect and smaller enemy bullets can be hard to spot. I was soon losing lives very frequently and I wasn't even sure what had killed me half the time. It's not that difficult when you get used to it though, and can be conquered in less than fifteen minutes, although several cheap tactics have been employed in later stages to make the going tougher such as the meteor shower that lasts for most of the fourth stage. In spite of all this, I think I still wanted to like it. Perhaps I felt sorry for it, but the fact is, XDR is a thoroughly average game which doesn't really have any redeeming features. I don't hate it as much as David (read his furious diatribe here). I don't hate it at all to be honest, I just find it to be an irritating, low-quality game and one of the weakest MD shmups.

Gameplay Video: here's a sample of the game being played by someone who isn't me. Credit to JohnX895 who recorded (presumably) and uploaded it. Oh, and don't watch if you want to avoid spoilers! :)